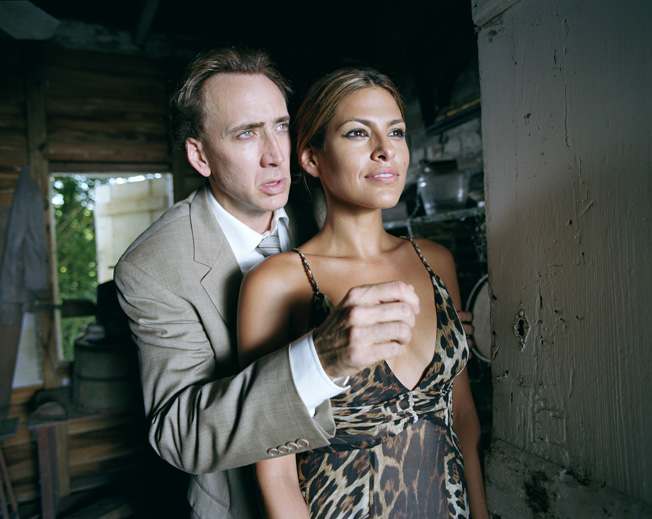 New Orleans police detective Terence McDonagh (Nicolas Cage) has some serious problems. He is addicted to drugs, gambling and his job, which now involves the investigation of the gangland-style slaughter of five Senegalese immigrants. The murder case will become an obsession for the addled “Bad Lieutenant: Port of Call New Orleans.”

Sgt. Terence McDonagh (Nicolas Cage, "Knowing") rescues a prisoner during Hurricane Katrina and is promoted for extreme valor. Six months later McDonagh is investigating the drug-related deaths of five Senegalese immigrants, but the back injury he sustained has turned him into a raging drug addict, a "Bad Lieutenant: Port of Call New Orleans." It seemed odd from the beginning - Werner Herzog ("Aguirre: The Wrath of God," "Grizzly Man") announcing a remake of the cult Abel Ferrara film, which he claims to have never seen - but Herzog, working with a script by "L.A. Law's" William M. Finkelstein, has made the concept his own in a film that is largely unrecognizable as a Herzog film. There is one exception - in choosing a lead actor known for being more than a little out there and letting him run, Herzog recalls his glory days with Klaus Kinski while giving Cage a role that inspires his best performance since winning his "Leaving Las Vegas" Oscar. It says something that Cage's partner Stevie Pruit is played by Val Kilmer ("Kiss Kiss Bang Bang") and that Kilmer almost fades into the woodwork, and yet, even though Cage's character often does outrageous things (and often is so wacked out he resembles Herzog's "Nosferatu"), Cage does not fly too high - the character may be going looney, but the actor is in control. The film is bookended by different reflections on the character that what happens in the middle that happen to coincide with promotions and a run in with the same con. In the first, Steve makes a bet with Terry regarding the amount of time the caged prisoner has left and Terry counters the $20 with a 'dime' ($1,000), so we learn he's a gambler. He asks the prisoner, Chavez (Nick Gomez, "Young Guns II," "The Prophecy") why he should ruin his $55 Swiss cotton underpants to save him and we learn he has a girlfriend with money and a high living habit. Just how 'high' life can go will be a surprise. At the execution style murder scene, Terry reads a poem he finds that's been written in broken English to the fighting fish in a jar, the second of many creatures (a snake winds through the waters of the opening scene) Terry encounters, both real and imagined. It's surreal and Cage's reading makes it more so. A visit to his girlfriend, Frankie (Eva Mendes, "Ghost Rider," "We Own the Night"), reveals that she's a high end hooker with a drug habit that Terry supplements with help from Mundt (Michael Shannon, "Revolutionary Road") in the police store room. Terry begins to really bug out when he's kept waiting to fill his prescription (with a 'PRESCRIPTIONS' sign dominating the frame from above) and takes it upon himself to fill it himself. But he's still effective at work, playing bad cop to Stevie's good cop during an interrogation that points to a dealer named Big Fate (Xzibit, "Derailed," "American Violet") as a likely suspect in their investigation. By the time Terry has worked his way to the man, he's screwed over mobsters wanting payback for one of Frankie's Johns, his own bookie Ned (Brad Dourif, "One Flew Over the Cuckoo's Nest," usually dominated in the frame by a 'Red Beans' neon sign over his head), several store room cops and a Congressman's grandmother. And he tries to get out of his multiple jams by doing business with the very man he was out to collar. After the F.B.I. has taken away his gun. The film is both a police thriller and a drug addled fantasy with an iguana for a guide and Cage plays it like Hunter S. Thompson with a badge. In Finkelstein's script, Terry may dig himself a mighty big hole as he goes through his paces (including caring for his dad's dog when his dad (Tom Bower, "North Country," "Appaloosa") goes the AA route), but somehow everything magically works out all right. Herzog marks his path with signs (a couple leaves 'Cajun Retreat' only to be collared by McDonagh, who tokes crack while fondling a suspect's girlfriend in the scene most reminiscent of Ferrara's version with Harvey Keitel; the Congressman's mother is in 'Assisted Living,' etc.), but while he's cast considerable talent in supporting roles (Fairuza Balk, "The Waterboy," - where's she been?! - as a cop with connections to the store room; Jennifer Coolidge as McDonaugh's beer swilling stepmom; Irma P. Hall as a caretaker and grandmother to Denzel Whitaker's ("The Great Debaters") witness; Vondie Curtis-Hall as McDonagh's Chief), the film hangs on Cage's terrific riffing and sublime body language (he's revealed from behind a door like a wooden spider). Herzog's production brought money to New Orleans, but he doesn't really show off the city - there's only one shot of a black wrought iron gate, the rest of the locations, McDonagh Sr.'s rural home excepted, are pretty dreary. Still, that closing bookend, which, initially anyway, shows a newly sober family including a glowing, pregnant Frankie, ends on a more ambiguous note at the Audubon Aquarium with much bigger fish in a much bigger jar. The film may not always be pretty, but Herzog's created visual interest by embedding it with symbols and signposts.