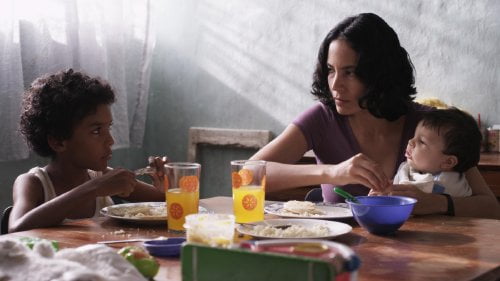 Curly haired 9-year old Junior (Samuel Lange Zambrano) wants just one thing: his mop of hair straightened so he can pose as a rock star for his school picture. But, his hard-working single mom, Marta (Samantha Castillo), will have none of it and Junior must contend with “Bad Hair.”

All nine year-old Junior (Samuel Lange Zambrano) can think about is the school picture he needs to have taken, the least of his struggling, unemployed single mother Marta's (Samantha Castillo) worries. As Junior plots to straighten the kinky curls he inherited from his Black dad, Marta responds harshly, seeing signs of homosexuality. The strained relationship between mother and son is exacerbated when Marta's mother-in-law Carmen (Nelly Ramos), who'd love to keep the boy to bring up herself, gets in the act of trying to eradicate Junior's "Bad Hair." Writer/director Mariana Rondón's ("Postcards from Leningrad") film, winner of the San Sebastian Film Festival's Golden Shell, gives us a rare look at the harsh realities of Caracas, Venezuela. The film is a marvel of tone, dispensing cruel life lessons while charming us with a child's point of view. Rondón has achieved completely natural performances from her young star and the thoroughly delightful María Emilia Sulbarán as his pudgy friend with dreams of her own attached to that school portrait. Junior lives in a depressing apartment block with his mom and baby brother who seems to receive all of Marta's affection. Eventually Marta's aggravation with her son's desire to look like a long-haired rock star is revealed as something else entirely when she takes him to a doctor who declares him perfectly healthy. When Marta remains unsatisfied, the doctor gives her some advice which she takes far too literally. Junior's innocent brushing against a man in on a bus, his homemade hair remedies and his adoration of the local kiosk boy are all seen as damning evidence in her eyes. But Carmen embraces Junior's quest. When the boy's left with Grandma, the two dance, her coaching him to learn to sing 'The Lemon Tree' to make his photo shoot more realistic. But her creation of his 'singing suit,' a flamboyant ruffled stage getup, causes Junior himself to recoil, accusing Carmen of wanting him to wear a dress. In the background is Marta's attempt to get back her job as a security guard, leading up to the seduction of her sleazy boss (Beto Benites, "Columbiana"), a double-barreled agenda. "Bad Hair" is at its best as we watch Zambrano and Sulbarán playing together, withstanding neighborhood jibes together, or sparring as the boy reflects his own frustrations on his friend. Castillo is also very good portraying a young woman growing old before her time, her stern weariness occasionally relenting to youthful indulgence or tenderness towards her eldest. At times, though, the film can be a bit too ambiguous, especially in regards to the family's patriarchal side. The film's final, crushing image is leavened with an amusing, fantastical credit roll out. Grade:

Writer-director Mariana Rondon creates an odd mother-son tale where Marta, for reasons untold, fears that Junior may be gay. His obsessing over his hair, desire to play a flamboyant rock singer and his constant scrutiny of her unnerve Marta. Couple this worry with being without a job, without money, a six-month old baby and no job prospects – she lost her housecleaning job because of Junior – and you have a woman under the gun. Another family dynamic involves Junior’s grandmother, Carmen (Nelly Ramos), who refuses to help her daughter-in-law unless Marta gives her custody of Junior. Carmen gives off a weird vibe as she helps the boy with his rock star costume that looks more like a dress than a costume. It makes you wonder about Marta’s not seen husband, Oscar, whose whereabouts are unknown – is he dead or did he just leave his family? Rondon elicits solid performances from her young star Zambrano, Castillo and Ramos. But, the perf by Junior’s BFF (Maria Emilia Sulbaran), a girl from a more privileged family than his, is notable as the two kids play off each other well and convincingly. The strange dynamics and motivations between the players make “Bad Hair” a compelling little film, though not for everyone.