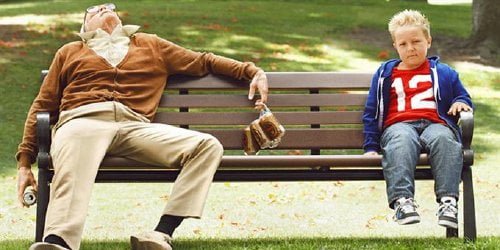 Eight year-old Billy (Jackson Nicoll, "Fun Size") is about to get the education of a lifetime when his mom, who's heading into jail, sends him to his dad with her 86 year-old father Irving Zisman (Johnny Knoxville, MTV's 'Jackass,' "A Dirty Shame"). In addition to having grandma, who just passed away, in the trunk, Billy will be taught how to chase tail, drink beer and shoplift with his "Bad Grandpa."

The Jackass series take Allen Funt and Sasha Baron Cohen's hidden camera approach to interacting outrageously with unsuspecting citizens to reality hilarity in this raunchy, riotous tale of intergenerational male bonding. There are few lines Knoxville and company are unwilling to cross in this decidedly un-PC comedy. There's also really nothing here that hasn't been done before, a cross-dressing entry to the Carolina Cutie Pie Beauty Pageant possibly excepted, but this team guarantees a laugh with the tried and true even when it involves toilet humor. The duo operate as both a pair and on their own, some of Irving's raunchier exploits carried out after Billy's tucked away for the night (or locked in the car, or wandering a city plaza, or left in a biker bar with dad...). Irving might not be able to stir the gumbo, but he's always willing to lick the spoon, especially when the object of his attention is a black woman (one poor soul at Sunrise Biscuit Company's drive through window is genuinely mortified when offered a 'serving of Irving'). Knoxville's an old hand at this stuff, but his young costar is an amazing natural, fearless and convincing in his staged exploits. Knoxville's aging process (makeup, physicality and voice) is just convincing enough on its own but Nicoll always provides the slam dunk - no one can resist a cute kid with an old man. Director Jeff Tremaine gets good coverage from well hidden cameras. Stick around for closing credits which expose camera people, on set pranking and reactions of the people just learning they've been punked.