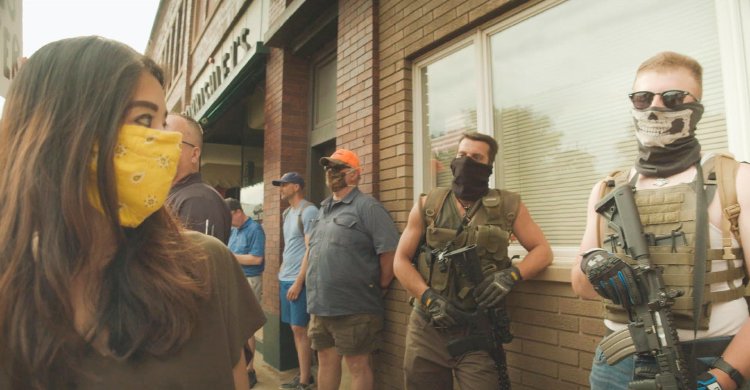 Director/cinematographer David Siev makes his feature directorial debut by turning the camera on his own family after returning to his Michigan home town from New York City during the pandemic.  The entire family has reunited to try and keep the family restaurant named after his Mexican American mother, Rachel’s, running while protecting she and their Cambodian refugee father Chun from the virus, but the children’s decision to publicly support the Black Lives Matter movement and David’s release of a fundraising trailer for the film bring about backlash in “Bad Axe.”

Siev, whose first short, “Year Zero,” was about his father’s flight from the Killing Fields in 1979 with his mother and five siblings, has pride of family shining through his documentary as he depicts his elder sister Jaclyn stretching herself to the breaking point working a city corporate job remotely while also managing the business under her father’s critical eye, but multiple scenes come across as staged, a family soap opera, and some of the drama exaggerated.   Still, despite its flaws, this is a loving family portrait and picture of a community becoming divided by partisanship when its white conservative status quo is challenged.

After witnessing older sister Jaclyn reading a lengthy letter condemning the family’s BLM stance and emphatically withdrawing patronage, we jump back to six months earlier where the family watches Governor Whitmer instructing businesses to close on their restaurant bar’s TV. Adjusting to takeout business isn’t easy, but another sister, Michelle, arrives to help the family, which includes college student Raquel, prepare for ‘sushi night,’ a roaring success in a community starved for entertainment.

Jaclyn has been at odds with her parents, especially Chun whose high blood pressure makes him more susceptible to COVID.  As he sits in a booth sewing cloth masks, Jaclyn points out that even her KN95 isn’t 100% protective.  (Later, when mask mandates are dropped, there is an ugly incident with an obnoxious patron challenging the restaurant’s policy until police need to be called, another couple in the background yelling slurs.)

David then gets into Jaclyn and her father’s relationship with confessions from Chun which feel far too scripted for the camera.  Jaclyn, we’re told, hasn’t fallen far from the tree, but although Chun says he knows how much she’s done for the restaurant ‘in his heart,’ he fails to tell her.  He’s finally convinced to stay home and he and Rachel ‘take a break.’  Chun later tells us ‘everybody here has a gun’ and proceeds to show his daughters how to shoot one, something which looks completely foreign wielded by dad in an awkwardly inserted segment.

Perhaps in an attempt to not recreate his short, Siev fills in his father’s background across the documentary’s running time, often resulting in narrative confusion when introducing Chun’s mother, who died decades before the events illustrated here (several instances of a gravestone etched ‘Mother’ had me thinking Rachel had succumbed to COVID).  We are told the family initially ran a donut shop, The Baker’s Dozen, which Bad Axe’s small population could not sustain, leading them to reinvent the business as a full fledged restaurant, but later talk of a donut shop being run in conjunction with a tae kwon do school does not make it clear these businesses were not in Bad Axe, leaving us wondering why Chun abandoned martial arts instruction.

The family whose business rests within a landscape surrounded by Trump flags acknowledges that they have kept their opinions to themselves, but the BLM movement raises stakes, Jaclyn, in particular stating she cannot remain quiet.  She participates in a peaceful protest, wrangling with neo Nazis wearing skeletal masks and carrying automatic weapons.  These depictions make David’s stated intent to make a ‘love letter to Bad Axe,’ questionable, despite his explanation that the community has made his father’s ‘American Dream’ possible.

And as “Bad Axe” closes, we learn that Raquel has completed her college degree, those neo Nazis were arrested on multiple felony charges and Rachel’s is doing just fine.   Siev’s documentary has heart but lacks strong structure and firmer conclusions.

We can all cite, chapter and verse, our experiences during the first, terrible year of the (ongoing) COVID-19 pandemic. For David Siev, it meant taking video camera in hand and chronicling the life of his family as they try to keep their restaurant, and family, from ruin in the Michigan town called “Bad Axe.”

There have been many films made during COVID but I cannot think of many documentaries on the impact the pandemic had on a single family. The Siev family, owners of Rachel’s Restaurant, is a mix of Cambodian with dad, Chun, and Mexican with mom, Rachel. They settled into life in Bad Axe and the family business was doing well. Then, COVID hit and David grabbed his camera.
The effort, until its extended and added-on epilogue, is a straightforward chronicle of Siev family life when the hammer came down on the world. The shutdown brought life as we knew it to a halt and their story starts then. We see them struggle to get the restaurant going again and trying to survive on take out service alone.

Of course, since the family is part Cambodian, they had to weather the hate and “go back to your own country” harassment, vax and mask deniers and threats from Trump supporters. The result, to me, is a scathing indictment against hate and stupidity but, unfortunately, both are in ample supply in America.

The “reedited” ending feels tacked on and deals with issues not covered in the body of the documentary. David Siev had more to say and used his podium of the documentary to vent those feelings. I found the epilogue detracted from the tightly done story of a family in crisis that is well told.