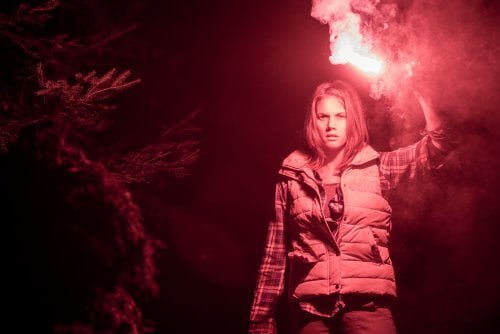 Outdoorsy alpha-male Alex (Jeff Roop) convinces his citified lawyer girlfriend, Jenn (Missy Peregrym), to go on a camping trip to a remote provincial park in Ontario where he spent his youth. When they register at the ranger station, Alex refuses the offered map, cockily declaring he does not need it. This fateful decision will lead them to a place of primal fears in “Backcountry.”

Jenn (Missy Peregrym, "Stick It") is a bit trepidatious about boyfriend Alex's (Jeff Roop, TV's 'Heartland') weekend plans for them, especially after a park ranger (Nicholas Campbell, TV's 'Haven') tells them that Blackfoot trail is closed and each will be fined $500 if caught there. She should be more alarmed when Alex refuses the ranger's offer of a map, claiming he knows every inch of "Backcountry." Writer/director Adam MacDonald's feature film debut is an effective horror thriller with fine performances from its little known cast. Unfortunately, his film follows Bobcat Goldthwait's Bigfoot movie, "Willow Creek," with which it shares a number of similarities (most notably a scene shot within a tent), which itself owed more than a bit to "The Blair Witch Project." With its dubious stranger Brad (Eric Balfour, 2003's "The Texas Chainsaw Massacre," TV's 'Haven'), the film recalls "Wild" and its central horror Werner Herog's "Grizzly Man." Yet even though many elements of this 'based on a true story' tale are familiar, MacDonald takes the time to let us get to know his characters. Anyone who's been in a relationship will relate to the debate over the car's CD player and Jenn's reluctant smile at Alex's robust singalong tells us much about them. The director also establishes an unsettling tone right off the bat, his camera low on an object we can't quite make out, but know is attracting flies. Grade:

When a film begins with “Based on true events,” I am prepared to take this with a grain of salt. But, “Backcountry” is not bad as a thriller about a couple going into the deep woods – bear country – and facing enormous dangers. Tyro helmer-scribe Adam MacDonald marches out all the clichés and foreshadowing gimmicks of a new filmmaker but does so with fairly assured hand. Costars Roop and Peregrym do a fine job in giving their characters a convincing arc, although Alex’s decisions as the “expert woodsman” are questionable early on. What experienced camper would hike into the wilderness without a map, a means to mark a trail, no defensive weapons or any kind of a contingency plan in bear country? This diminishes the Alex character as his list of bad decisions grows. Missy Peregrym, on the other hand, gives good strength of character to her Jenn. Hers is the stifled voice of reason that constantly proves Alex’s bad choices. Jenn, rather than growing weak and helpless in her arduous and deadly predicament, keeps a cool head, like thinking to bring along anti-bear spray, flares and a cell phone (which Alex leaves in their car). For a brief, odd moment in the film, a stranger, Brad (Eric Balfour), crosses their path, introduces a sinister note, possibly sexually toward Jenn, then is gone. It is as if the filmmaker introduced the character but did not go anywhere with it or lost interest. Any movie that has a real life monster as its main scary point – “Jaws,” “Piranha,” “Anaconda” and more – has to have a payoff. MacDonald does it by teasing with references to a big bear’s unseen presence until about the halfway juncture when the bad bruin makes his appearance. Like “Jaws,” “Backcountry” will make some think twice about going into the woods for vacation.