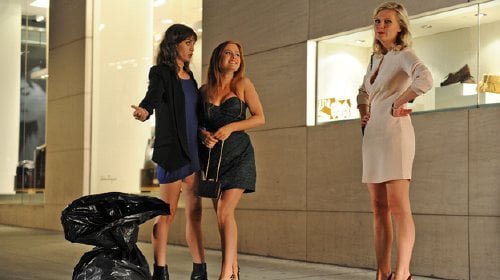 Twentysomething Regan (Kirsten Dunst, " Melancholia") is thin, beautiful, works with children with cancer and has a boyfriend in pre-med, but all of that seems worthless when her overweight friend Becky (Rebel Wilson, "Bridesmaids") who never graduated college announces she's engaged to the good-looking, upwardly mobile Dale (Hayes MacArthur, TV's 'Perfect Couples'). Regan's jealousy and self loathing complicates her role as Becky's maid of honor and things get more out of hand when high school buddies hard-partying Katie (Isla Fisher, "Wedding Crashers") and never-gotten-over-her-high-school boyfriend slutty Gena (Lizzy Caplan, "Cloverfield") join the bridal party and bring their own ideas to "Bachelorette."

Writer/director Leslye Headland makes her feature debut with this comedy which isn't really all that funny but is a lot more honest than last year's "Bridesmaids." Although the film begins with the same central conceit - a maid of honor coming apart at the seems faced with her own perceived inadequacies - he four women at the center of this film feel like real people. Coming out of this year's Sundance film festival, "Bachelorette" was often described as a raunchier, edgier version of "Bridesmaids," but, except for more overt drug use, this one doesn't go for outrageousness for outrageousness's sake. Instead it looks at how women often tend to come down on themselves and complicate their lives even further. For all her outrage over Becky's 'success,' when the chips are down, Regan turns out to be a true friend. The film opens with Regan pre-assessing Becky's announcement with platitudes about men not deserving her then getting sucker-punched by the impossible. Regan's just ordered a Cobb salad with all the good bits left out while Becky's enjoying a bacon cheeseburger with fries and now Becky's got a ring on it to boot. Regan calls from New York to let L.A. based Gena and Katie learn the news. Gena's not motivated about anything until she hears Clyde (Adam Scott, "Friends with Kids") will be at the wedding. Flaky Katie's thrilled to do 'prom' all over again. When the former B-faces (a yearbook reveals former nicknames, none exactly flattering, but Becky's the worst) reunite for the rehearsal dinner, Regan has all she can do to keep Katie somewhat sober and tales of bulimia leaking to the assembled guests. When Becky's desired champagne and ice cream bachelorette gathering is pumped up with coke snorting and male strippers, she and mom Victoria (Ann Dowd, "Compliance") close down the proceedings. Unfortunately Regan, Gena and Katie keep going and their first idea - to put two of them into Becky's dress to post a picture on Facebook - has dire consequences. And so the entire night is spent trying to undo the damage done to Becky's wedding dress, which, of course, gets worse as the night wears on and the trio join up with the bachelor party at a local strip club. Katie continues to get blotto despite the sweet attentions of Joe (Kyle Bornheimer, TV's 'Perfect Couples'), the guy she barely remembers from high school while Gena slowly works out the root of her problem with Clyde. Trevor (James Marsden, "X-Men," 2011's "Straw Dogs") comments upon the action and keeps Regan honest. "Bachelorette" is kind of like "Mean Girls" crossed with "After Hours" if overt funny was replaced with character insights. There are some chuckles to be had with the girls's dealings with Theresa (Shauna Miles, notable), the hotel's no-nonsense cleaning supervisor ('This is housekeeping, not Project Runway.'). Dunst is great wordlessly replacing superiority with astonishment, then arcing from stressed aggravation to determination. Caplan also gives us a different impression than what she eventually reveals (hurt and abandonment) and works well with the always watchable Scott. Fisher does the blitzed ditz with sharp physical acumen and Bornheimer's a believable sensitive male. While Wilson impresses with her flawless American accent, her bride remains more a symbol than a character, Headland never delving into the changes which have evidently occurred with Becky since high school. Everything wraps a bit abruptly, but in a good place. "Bachelorette" is a bit slight, but its insights are right.