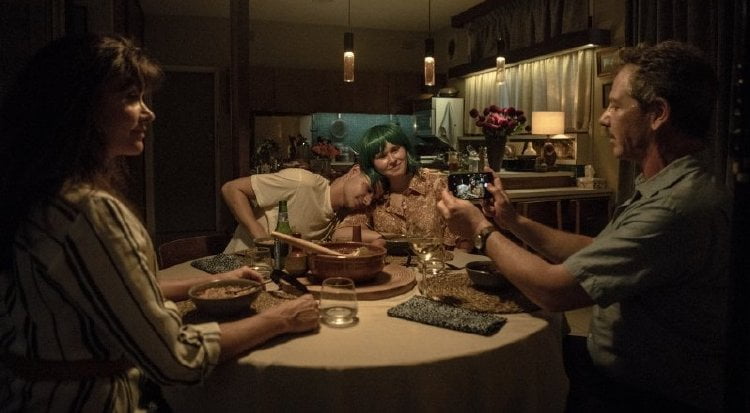 A 15 year-old girl in a school uniform is almost knocked down by a tattooed junkie who races to the edge of a train platform and stops just as it rushes in.  Milla (Eliza Scanlen, "Little Women") doesn’t board with her schoolmates, instead intrigued by the skinny, dark-eyed man who tells her her ‘hair looks like bangles’ and tends to her tenderly when her nose begins to bleed.  23 year-old Moses (Toby Wallace) will become Milla’s parents’ worst nightmare, at least until they realize he makes their dying daughter happy in “Babyteeth.”

First time feature director Shannon Murphy  (TV's 'Killing Eve') turns an Australian stage play (adapted by its author Rita Kalnejais) into a dramedy about embracing life with strong subtexts about psychiatry versus art therapy and prescribed versus recreational drug abuse.  Eliza Scanlen, who we recently saw waste away slowly in “Little Women,” here confronts her fatal illness like an exuberant adventuress with no reason to fear risk.  Hers is a mischievous performance tinged with melancholy.  But Toby Wallace is the real standout here as a low level drug dealer rejected by his own mother who revels in the unexpected kindness and acceptance he gets from Milla, even as he wrestles with his criminal urges.  On the sidelines as Milla’s parents Henry, a psychiatrist, and Anna Finlay, Ben Mendelsohn and Essie Davis comically confront their ‘bad parenting’ as the dysfunctional control issues which define their marriage are revealed.

The film is broken into titled segments like ‘When Milla met Moses on Platform 4’ and ‘Nausea.’  Occasionally we follow Henry as he runs into new, very pregnant neighbor Toby (Emily Barclay) who has a dog named Henry and is, apparently, lonely.  (This side story adds little, especially at the end when she goes into labor at a crucial moment, only to be entirely forgotten, unless that was done specifically to cast doubt on the veracity of that scene.)  Mostly, though, we follow Milla and the filmmakers have found wonderful ways to comment upon her changing outlook via her hair.

For example, at school, Milla is humiliated when a friend insists rather too strongly on trying on her wig, leaving the teen exposed.  She and Moses’s first outing involves him giving her a haircut with the poodle clippers his mother uses on her prize bichons.  The new punk look suits her, even after being interrupted by Moses’s mother demanding he leave her house.  After being found breaking in to steal prescription drugs by Anna, Moses will stop short to admire Milla when she skips in sporting a new, blonde wig.  She’ll wear a teal number out on an elicit date before embracing the baldness that shamed her before.

Milla initially, at least, gets more support in her new relationship from Anna than Henry, something Henry reacts to by policing his wife’s Zoloft intake (she is clearly his most dependent client).  Both female Finlays enjoy time spent with music teacher Gidon (Eugene Gilfedder), more of a life guru who bolsters Milla’s confidence with the admiration of his younger student Tin Wah (Edward Lau).  A third act piano (Anna)/violin (Milla) duet between mother and daughter is deeply moving.  Overall the film’s use of music is quirkily curated, classical to a children’s song effectively deployed.

The odd romance at its core recalls “Dinner in America,” an indie making festival rounds about a social misfit and drug dealing rocker.  But “Babyteeth” (Milla loses her last during the course of the film’s events) has a less outrageous tone as it yearns for tolerance and forgiveness.  The film includes a soothing coda that can be read as a ‘what if’ or alternate ending to the scene that came before.