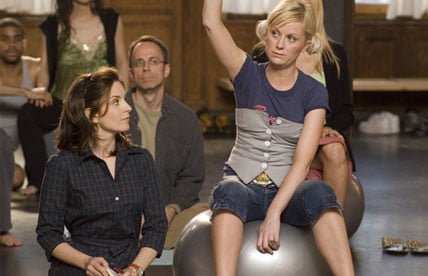 As the VP in charge of development for the Round Earth organic food store chain, Kate Holbrook (Tina Fey, SNL, "Mean Girls") has given promotions precedence over pregnancy, but at the age of thirty-seven, the maternal urge kicks in big time. With no significant other and a poor prognosis on artificial insemination, Kate turns to surrogacy and is paired up by a high profile firm with Angie Ostrowiski (Amy Poehler, SNL, "Blades of Glory"). One look at Angie and Kate's doorman Oscar (Romany Malco, "The 40 Year Old Virgin," "Blades of Glory") informs her that she's got herself a "Baby Mama."

With known scribe Tina Fey (TV's "30 Rock") in the starring role, audiences may be expecting her tart brand of comedy for this oh-so-female subject matter, but no. "Baby Mama" is brought to us by writer/director Michael McCullers, author of the "Austin Powers" series, and this is about as funny as "The Spy Who Shagged Me" - not very. At best, Amy Poehler's sense of physical funny, a charismatic turn by Malco and some subtle superiority from Sigourney (Weaver, as pregnancy 'outsourcer' Chaffee Bicknell) elevate this to mildly amusing. Kate has her hands full trying to keep 'white trash' Angie, who lives with common law layout husband Carl (Dax Shepard, "Zathura: A Space Adventure," "Idiocracy"), on a healthy path while also orchestrating Round Earth's flagship store at the behest of egocentric New Age owner Barry (Steve Martin, "Shop Girl," "The Pink Panther"). Scouting for an urban Chicago location, Kate meets Rob (Greg Kinnear, schlepping bevies again as in "Feast of Love"), a guy trying to make a go of an organic juice bar, and pumps him for information. Soon they're a couple, but Angie's moved in after catching Carl cheating. Complications ensue, but they're not hard to see coming. Fey maintains her single bookish chic persona from "30 Rock," setting up jokes for the rest of the cast. Poehler's fun messing about with an American Idol karaoke game and has a great poker face for denial, but too many routines as written, such as Angie trying to cadge alcohol any way she can during a night out clubbing or an "Endless Love" double entendre montage between her and Kate, feel old hat. As does the lisping routine forced on Siobhan Fallon (SNL, "Funny Games U.S.") as a birthing instructor and Martin's New Age absorption. Dax Shepard is a rednecked cliche. Maura Tierney (TV's "ER," "Semi-Pro") adds warmth as Kate's sister Caroline but both she and "Two and a Half Men's" Holland Taylor as mom are underutilized. It's really telling that the film's best character is the doorman. Watch for a series of cameos from SNLer's like Fred Armisen as a stroller salesman and "The Visitor's" writer/director Tom McCarthy as one of Kate's dates. "Baby Mama" isn't a bad movie, per se, it just isn't a terribly interesting one. We wanted Cheerios and got strained peas.