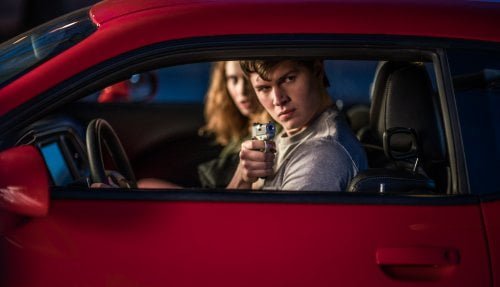 A young kid (Ansel Elgort, "The Fault in Our Stars") wearing sunglasses and ear pods pulls up in front of an Atlanta bank with three passengers. As Buddy (Jon Hamm), Darling (Eiza González, "Jem and the Holograms"), and Griff (Jon Bernthal) pile out, the kid selects 'Bellbottoms' by the Jon Spencer Blues Explosion from his playlist, drumming along on his steering wheel. He uses music to counter the tinnitus he suffered in the car accident that orphaned him, but he's become adept at choreographing getaways set to particular beats as the "Baby Driver."

Writer/director Edgar Wright's (the Cornetto trilogy) 'musical' heist film is so driven by its beats he and his "Scott Pilgrim vs. the World" editor Paul Machliss came up with its soundtrack before its script. Action lovers will be impressed by the film's choreography and live stunts, one driver entering and exiting a narrow alley with 180 degree spins. But while "Baby Driver" pays homage to such films as Walter Hill's "The Driver," there's also a bit of "True Romance" in its makeup. The kid's name is Baby (although we'll learn his real name in the film's last minutes) and he works for Doc (Kevin Spacey), the heist mastermind who customizes crews for the jobs he's picked. Doc took notice of Baby when the kid stole his Mercedes. But Baby's a good kid at heart, trying to make money to care for his deaf, elderly foster father Joe (deaf actor CJ Jones), although Joe strongly disapproves of his career choice. Two things happen that convince Baby Joe's probably right. First he meets Debora (Lily James, "Cinderella," "The Exception"), the Bo's Diner waitress who connects to him through song, her name spelled like the T Rex single. And although that Atlanta bank heist goes off smoothly, when Baby's teamed with Bats (Jamie Foxx), JD (Lanny Joon, "Takers") and Eddie (Flea) to hit an armored car (to The Damned's 'Neat Neat Neat'), Bats kills a guard and accuses Baby of making him miss a shot on a pursuer (which Baby did, with incredible driving skills). Baby takes a job driving for Goodfellas Pizza, but when he takes Debora out to the tony Bacchanalia, Doc is there. Doc notes the new girl, picks up the tab and pulls Baby back in, having him case out a post office with his young nephew Samm (Brogan Hall, "Cold in July), a hilarious chip off the old block. But when the job goes down, Baby takes preemptive measures to protect a nice postal clerk (Allison King, "Midnight Special"), taking off on foot. There are big tensions in Doc's empire and Baby becomes a target. Elgort's all movement and rhythm, dancing daily on his Octane coffee shop run. The actor doesn't have a lot of dialogue (Griff asks Doc if he's 'retarded,' seemingly convinced after pulling out Baby's ear bud to discover Jonathan Richman & The Modern Lovers' 'Egyptian Reggae'), but he conveys his interior journey from cool and collected to morally conflicted. Lily James is just adorable, the English actress a retro American vision until Baby's troubles turn her somber, her embrace of the road complemented by a change of wardrobe (costume design by Courtney Hoffman, "Dark Shadows"). Spacey doesn't offer anything new, but his mentor-with-strings-attached is nicely balanced and he's quick with the quip ('This is JD. He puts the Asian in home invasion.'). Foxx's menace is only leavened by the humor derived from his dimwitted associates, whose interpretation of 'Michael Myers Halloween masks' for their forthcoming job isn't what Doc had in mind. Jon Hamm hasn't been very lucky with big screen roles until now, his Buddy a skin formulated to appeal to the much younger Darling whose loss makes him dangerous indeed. Keep your eyes peeled for musician cameos - in addition to Flea, there are Big Boi, Killer Mike and Sky Ferreira - the latter featured on the soundtrack as well as portraying Baby's mother in flashbacks. Paul Williams also stars as The Butcher. "Baby Driver" does begin to flag as it drives down its home stretch, the delight of a gunfight timed to 'Tequila' giving way to character witnesses and redemption. But Wright's creative twist on the genre is exhilarating, editors Jonathan Amos and Machliss, cinematographer Bill Pope ("The World's End") and a team of stunt people all noteworthy contributors to his precision timing. Grade: