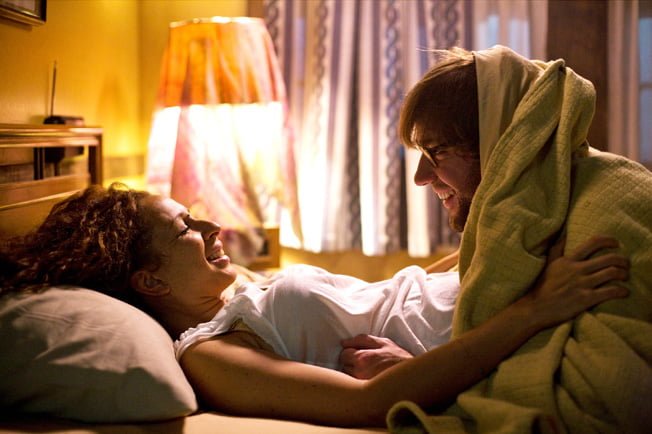 Burt (John Krasinski) and Verona (Maya Rudolph), though not married, are expecting a baby in about three months. Then, his parents (Catherine O’Hara and Jeff Daniels, who are, unfortunately, on screen far too briefly) drop a bombshell. They are moving to Antwerp, Belgium a scant month before their grandchild is born and will not be back for two years. The only reason the young couple moved to Colorado in the first place was to be near their baby’s grandparents. Now, they must decide where they want to put their roots down and begin a cross-country trek to find the perfect place in “Away We Go.”

Sam Mendes, during his relatively short 10-year film-directing career, has created such works as his Oscar-winning debut, “American Beauty,” “Road to Perdition” and last year’s “Revolutionary Road.” With “Away We Go,” Mendes shifts gears from drama to comedy and the result is a broken transmission. With the only reason to stay in Colorado moving thousands of miles away, Burt and Verona realize they need a game plan for relocating their lives. Here is when the story (written by Dave Eggers and Vendela Vida) takes a (more) absurdist turn. There are many things that bug me about “Away We Go.” Spectacle-wearing Burt always, and I mean always, wears his glasses, even when sleeping or having oral sex with Verona. (Talk about poor eyesight.) Then there is Verona’s friend Lily (Allison Janney), whom they visit on their first stop. Lily is loud, rude and behaves totally inappropriately in public (something that the film does frequently, to false-feeling results, like an intimate moment in a Jacuzzi, in the middle of a store showroom). Phoenix is no longer an option and the couple heads to Tucson Arizona to visit Verona’s sister Grace (Carmen Ejogo), to bland results. Cross Tucson off the list. They wend their way to Madison Wisconsin to visit LN (formerly Ellen (Maggie Gyllenhaal), an earth mother type who thinks it is wholesome and good to breast-feed her four-year old. (Another example of inappropriate (and a little sickening) behavior.) They make two more stops in their journey – Montreal to visit Burt’s old college friend, Munch (Melanie Lynskey), a loving adoptive mom who is obsessed with getting pregnant, but cannot. The final leg is to Miami to visit Burt’s downer, divorced brother, Courtney (Paul Schneider), a morose clinger that you just want to get away from. Where will these wanderers finally settle? The answer is, who cares. Sam Mendes is off his mark and should stick to drama. This episodic mélange is merely a series of chapters that are loosely linked together with Burt and Verona’s not-very-real-feeling trek to find a new home. The surprisingly stodgy lensing, by Ellen Kuras, consists mostly of static shots that are unimaginative and dull. Other techs are adequate, but no more. The only positive thing in “Away We Go” is a charming performance by Maya Rudolph as pregnant Verona. The rest of the cast is guilty of taking an unearned paycheck. The blame, though, rests on Mendes.