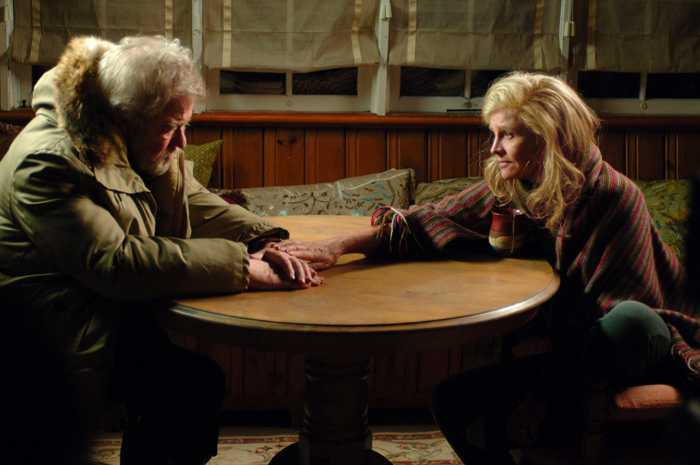 After 44 years of marriage, retired college professor Grant (Gordon Pinsent, TV's "The Red Green Show," "Saint Ralph") and his wife Fiona (Julie Christie, "The Secret Life of Words," "Finding Neverland") have an ideal life living in a cozy cabin, cross country skiing over the lake they overlook. But when Fiona's memory starts to fail her, she insists her husband check her into Meadowlake, an Alzheimer's facility, where he will not be allowed to visit her for her first 30 days. It will be a huge transition for the man who has never been "Away from Her."

Incredibly assured 27-year-old writer/director Sarah Polley has adapted the Alice Munro short story "The Bear Came Over the Mountain," into a melancholy reflection on the nature of love impacted by memory. It's like an edgier, literary "The Notebook." Polley has assembled a great cast (and I thank her for introducing the terrific Canadian actress Kristen Thomson, who starred in her short "I Shout Love," in a supporting role here), perfectly pairing the iconic Christie with the far lesser known Pinsent. The stage of the glamorous Andersson couple's union is reflected in the snow that encircles their home and the silver of Christie's hair and her mental state is evident in a heavily pixilated flashback of her. 'I feel like I'm beginning to disappear,' she tells her suddenly solemn dinner guests when she cannot remember the word for the wine she tries to offer them. She dries off a frying pan and puts it in the freezer and Grant's mournful, compassionate look is clearly one that has passed between them many times before. There is still passion, affection and humor in this marriage and Fiona cheers Grant immeasurably when she remembers the unusual flowers they found on a walk together, but she also remembers his hurtful cheating of twenty years earlier, a sore subject rarely voiced but brought up as they ride towards Meadowlake. Thirty days later, Grant anxiously returns to see his beloved wife and is stopped dead in his tracks. There she sits, fawning over fellow patient Aubrey (Michael Murphy, "Manhattan," "X-Men: The Last Stand"). She treats Grant's appearance as an upset to Aubrey and dismisses him with smiling politeness. 'You're awfully persistent, aren't you?' she repeats on all his visits. Devastated, Grant turns to the head nurse, Kristy (the aforementioned Thomson), who has supported him from the beginning and ponders whether Fiona's actions are a calculated game. If there is a weakness to Polley's film, it is here. The idea that Fiona may be getting payback from behind the shield of Alzheimer's is biting, but it Polley's hands it merely nips. The idea is floated, then drifts away, as the story shifts to Grant's efforts to pull his wife out of the advanced stage she disappears into when Aubrey's wife removes him from Meadowlake. Convinced that Aubrey's return will spark life back into Fiona, Grant visits Aubrey's wife Marian (Olympia Dukakis, "The Great New Wonderful," "The Thing About My Folks"), and in trying to convince her to help him, begins his own fantastical courtship. Christie is still startlingly beautiful, which accentuates the tragedy of her character's condition and she enjoys great chemistry with Pinsent, so much so that it is difficult to accept an underlying tension in the marriage. The film's sharpest performance comes from Dukakis, who marries hope with resentment into a prickly yet pliant concoction. With her soft yearnings and sharp edges, Dukakis's Marian is more clearly drawn that the more opaque Anderssons. As her husband, Michael Murphy is a shellshocked clench, soothed only by Fiona or the sports TV fed him by his wife. As Meadowlake's director, Wendy Crewson "Eight Below," "The Santa Clause 3: The Escape Clause") embodies the sterility of institutional facilities with her false cheer and parroted tour guide patter. In sharp contrast is the warmth and depth of Kristen Thomson's Kristy, supportive but not above the small, sly rebuke. "Away from Her" may have benefited from sharper focus in story and characterization, but it is still a fine and moving achievement and marks Polley, in her feature directorial debut, a talent to anticipate.