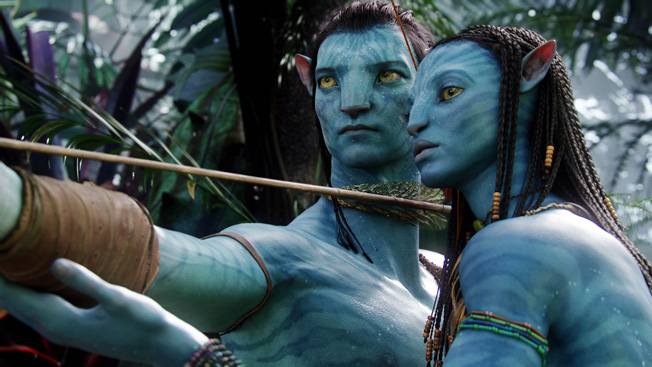 Jake Sully (Sam Worthington, "Terminator: Salvation") is a Marine who has lost both the use of his legs and his twin brother, a scientist who was working on a project to infiltrate the indigenous Na'vi people of the far off planet Pandora in order to work together for the greater good. As personal DNA was a project requirement, Jake is asked to take his place. But Col. Miles Quaritch (Stephen Lang, "Public Enemies"), who has little use for the Na'vi, asks Jake to report back on project lead Grace Augustine (Sigourney Weaver, "Aliens," "Vantage Point") when he follows her into the field using the body of his "Avatar."

Writer/director James Cameron ("Terminator," "Titanic") has made a couple of fascinating underwater documentaries, but hasn't made a feature film since crowning himself "King of the World" with "Titanic." His "Avatar" arrives on a tsunami of hype - the years and years in the making, the waiting for technology to catch up to the screenplay written over a decade ago, the eye-popping visuals experienced for fifteen minutes at IMAX theaters back in August. But now that it has finally arrived, all I can say is 'Is that all there is?' I already saw this story earlier this year in a CGI animation called "Battle for Terra" and I certainly didn't experience the sense of awe that I recall upon seeing "Jurassic Park" way back in 1993, even without 3D. It seems like Cameron's been hit on the head with a George Lucas stick - in "Avatar," the substance the U.S. is after on Pandora is called unobtanium, fer chrissakes. Still, Cameron gets credit for a film that doesn't feel as long as its 162 minute run time and his Na'vis and their world do, indeed, seem real to a degree. Cameron's beaten the 'dead eye' problem with his Na'vi characters, but they and too many of the Pandoran creatures are modelled too closely upon humans and other animals of Earth, just rendered in colors not normally associated with nature. Cameron sets up his playing field on the human, non-CGI side, but that doesn't mean we don't get a dose of special effects as Jake awakens from his cryo-sleep aboard a vast spaceship attended to by weightless medics. The mission is a corporate one (evil alert) led by Parker Selfridge (Giovanni Ribisi, "The Dead Girl," "Public Enemies") with the aid of the military under the command of Quaritch, a colonel with three claw marks grooving on the side of his scalp who warns that Pandora's wilderness is a deadly one. Science here is on the side of good under the cigarette-smoking, tough-love Earth Mother Grace, who doesn't believe Jake is a substitute for the brother who had been training for years and who resents not having had a say in the matter. But once Jake 'goes under' in his pod and awakens as his 10 foot tall, blue, able-bodied Na'vi self, Grace (whose Na'vi looks too much like Weaver and too little like the people she is reaching out to, despite her blue skin) is astonished by his natural coordination. He encounters strange beasts in the field and follows her instructions, but becomes parted from the group and stranded in the jungle. Good thing for him, because when he is attacked by a pack of dog-like creatures, he is saved by Neytiri (Zoe Saldana, "Vantage Point," "Star Trek"), a comely Na'vi who tells him off for having caused the deaths of the creatures with his bungling ways. And who happens to be the daughter of Eytukan (Wes Studi, "The New World"), the Na'vi clan's leader, who appoints her responsible for teaching Jake-Sully their (Native American Indian) ways. This, of course, will lead Jake into an appreciation for all things Na'vi, including Neytiri, and pit him against his own when the Na'vi refuse to leave their unobtanium-rich HomeTree. As has become the norm with 3D technology, Cameron uses it to take us more fully into his world rather than to make things jump out at us. That world consists of lush jungles dominated by trees that emit fluffy floating seeds and phosphorescent plant life. Dinosaur birds known as banshees bond, as do other creatures, by intertwining hair extensions, with the Na'vi who ride them. A type of rhino crossed with a hammerhead shark has a hide like armor. The Na'vi themselves have gold eyes and broad cat-like noses, ears and skin markings with slender physiques and graceful movement. The inevitable battle is like the raising of a rainforest on a grand scale, the destruction of the HomeTree clearly designed to provoke memories on the falling Twin Towers. As a U.S. Marine, Worthington's Aussie accent is more evident than not, but he's good as his bungling Avatar. Better is Saldana, who gives a sexy, feral performance, and who has real chemistry with her co-star. Weaver is fun, although given a drippy end while Lang is all jarhead hardass. Michelle Rodriguez (TV's "Lost," "Fast & Furious") shows grit as a sympathetic U.S. pilot and Joel David Moore ("Art School Confidential," "Hatchet") add the nerd quotient as Jake's fellow Avatar 'driver.' CCH Pounder (TV's "ER," "Orphan") provides the magical voodoo witch doctor aspect as Moat, Neytiri's mother. "Avatar" is an indigenous and eco-friendly, anti U.S. Imperialism film that wears its heart on its sleeve and uses simplistic means to deliver its message. 'I see you' as acknowledgement of someone's essence is about as deep as it gets. The film is flashy looking, but not really awe-inspiring. Cameron's ex-wife delivered that film this year and it's called "The Hurt Locker."