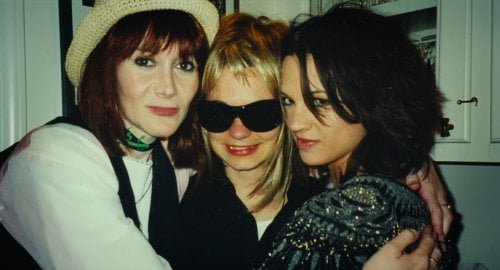 In 1999, a first novel called 'Sarah' became a publishing sensation, its author lauded as a fresh new voice in the Southern Gothic tradition. When the shy writer eventually appeared in public, the young boy who'd written about growing up the son of a truck stop prostitute drew fans from Hollywood and rock 'n roll. Asia Argento optioned the rights to his second book and made it into a film. Then a bomb dropped - the author's persona was entirely made up and the man who'd been appearing as him was the actual author's sister-in-law. Writer/director Jeff Feuerzeig ("The Devil and Daniel Johnston") looks behind the curtain of what has been described as one of the greatest of all literary hoaxes in "Author: The JT LeRoy Story."

Up until now, we've only heard about the JT LeRoy saga from the outside in. Feuerzeig presents the story from the inside out, Laura Albert facing his camera to tell us all about the birth of Jeremiah 'Terminator' LeRoy. As it turns out, a hoax was the furthest thing from her mind. Albert had a difficult childhood with a harsh mother who did little for her self esteem. She struggled with her weight for years and was committed several times to psychiatric hospitals. Years later, living with her musician boyfriend Geoff Knoop, Laura picked up the phone and called a therapist, adopting the guise of a Southern teenager named Terminator. He encouraged the lad to write about his experiences. Laura faxed the pages and pages 'Terminator' wrote about his abusive upbringing and the therapist noted the literary qualities of his patient's writing. His encouragement gave birth to the first publication of Terminator's work. Three years later, with 'Sarah' about to be published, Terminator morphed into JT LeRoy. As the author's work soared in popularity, more and more people wished to meet its creator. One day as Laura sat with Geoff's sister Savannah, she saw the makings of JT LeRoy. Then things really got crazy as Laura adopted a new personna for herself, the English accented Speedie, a go-between for and friend of LeRoy's. Feuerzeig backgrounds his subject with the animated words of her novels as well as hiring two animators to depict her stories and passages of her life. But Albert had a wealth of archival material from her childhood through LeRoy's fame, all woven in as she tells her tale. It's a collage approach that suits the artist. But while the film's final revelation tells us a lot about the development of the author, we're left to fill in many blanks ourselves. Smashing Pumpkins' Billy Corgan was in on Laura's creation, but others were not, yet it seems only Argento was bothered by the ruse (Albert was sued by the film company for signing a contract as JT LeRoy), at least from what we're told here. Geoff and Laura's son is mentioned too briefly, then disappears from the dialogue. Geoff's betrayal is shocking, but he's never fully fleshed out enough here to put it into perspective. "Author: the JT LeRoy Story" is a stylish and fascinating breakdown of one very strange story, but while we may come away convinced that Albert never set out to hoodwink anyone, Feuerzeig hasn't entirely cleared out the smokescreen. Grade: