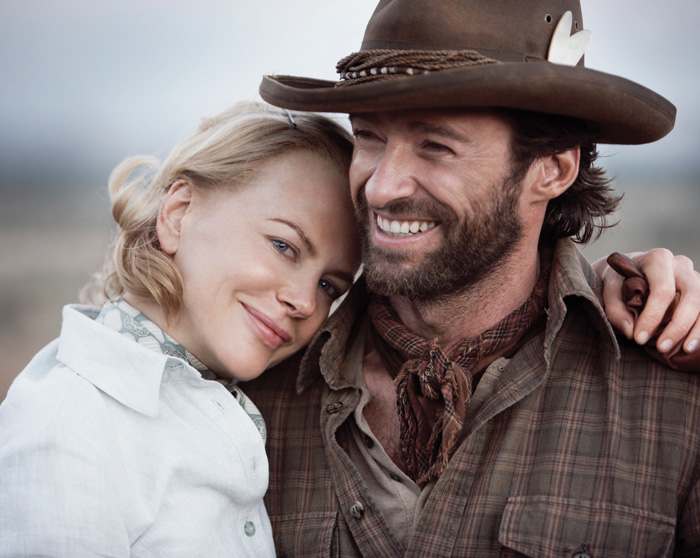 As WWII begins to expand out of the European theater, British aristocrat Lady Sarah Ashley (Nicole Kidman, "The Golden Compass") decides to traverse half the globe to confront her husband's cheating ways. What she finds is her husband's corpse, a half caste boy hiding from the cops and a vast estate run by corrupt manager Neil Fletcher (David Wenham, "The Proposition"). Lady Ashley turns to the Drover (Hugh Jackman, "X-Men") to save Faraway Downs from going for a pittance to King Carney (Bryan Brown, "'Breaker' Morant") by driving 1500 head of cattle across the desolate and majestic Kuraman Desert of "Australia."

Baz Luhrmann won't be directing his "Moulin Rouge!" star to an Oscar nomination this time around. As written by himself, Stuart Beattie ("Collateral," "30 Days of Night"), Ronald Harwood ("The Diving Bell and the Butterfly") and Australian novelist Richard Flanagan, the director's sweeping epic is so faithful to recreating the films of his father's generation from which it is cobbled together, the entire thing is embedded in artificiality. In its opening twenty minutes, when Lady Sarah arrives in Darwin for a series of humiliating humblings, Kidman's character could be a Tex Avery creation, so exaggeratedly cartoonish are her reactions. The remainder of the 165 minute film could have been codirected by Victor Fleming, whose "Gone With the Wind" provides a veritable checklist and whose "Wizard of Oz" is noted often, and Michael Bay, whose "Pearl Harbor" used the destruction of a military outpost to conclude a romance. Chuck in a little "Red River," a smidgeon of "Casablanca" ('don't play that tune'), the opposites attract pairing of "The African Queen" and the social injustice of "Rabbit-Proof Fence," process the dialogue through the Australian slang dictionary, and you'll arrive at something like the cacophony that is "Australia." After having her underwear dumped in front of Darwin's saloon to the delight of the locals and being treated to the sight of a 'lovely' kangaroo being shot, Lady Sarah quickly begins to turn into the respected 'Mrs. Boss' when she heeds the words of Nullah (Brandon Walters), the half-cast son of Fletcher and an Aboriginal servant, who tells her how Fletcher has been moving her unbranded cattle into Carney's lands. When Fletcher tries to attack the boy and his mother for his 'lies,' Sarah fires him and drives him off the land. Now the only man she can turn to is the drover who brought her there. Intrigued by the challenge and the satisfaction of beating cattle baron Carney, the drover must take Sarah, Nullah, Nullah's grandmother Bandy (Lillian Crombie) and uncle Magarri (David Ngoombujarra, "Kangaroo Jack"), and alcoholic accountant Kipling Flynn (Jack Thompson, "The Sum of Us," "Leatherheads") and turn them into his droving team. During the arduous journey, Sarah falls for both Nullah, who makes a brave and magical stand to save the herd from charging off a cliff, and the Drover. The Drover, in turn, responds to her spirit and determination and they do get their cattle to Darwin, much to Carney's chagrin. When Nullah's grandfather King George (David Gulpilil, "Walkabout," "Rabbit-Proof Fence"), the Aboriginal magic man wanted for Lord Ashley's murder, calls the boy for walkabout, though, a rift forms between Sarah, who does not want him to go and the Drover who believes he must. The two are separated until the war, and the Japanese bombing of Darwin, crosses their paths once more. After the film's oddly comical introduction of Lady Sarah, Luhrmann switches gears and gets down to his old-fashioned epic mode, but even when he finds his dramatic groove, he alienates the audience with his stylized imitations. The impressive Australian vistas of the droving scenes are intercut with close ups of the cast riding horses which have been cropped like the old studio pictures to hide the fact that the actor isn't actually atop a living, breathing animal and instead of creating homage to those old films, where one can accept such visual terminology, it calls attention to what can only be Luhrmann's attempt at cleverness. I began to compose a checklist in my head of all the "Gone With the Wind" touchpoints - wealthy beauty and roguish adventurer, check; a place symbolized by the land a woman owns, check; charming old alcoholic father figure, check; black people treated badly, check; raging fires and war time, check; bidding for a widow at a charity ball, check! "The Wizard of Oz" is referenced more directly, as Sarah, in trying to tell Nullah a story, chances on a movie ad in the paper, then tries to sing him 'Over the Rainbow' which becomes his theme. The film even ends with a 'no place like home' wink, an attempt to equate the Oz fantasy with Australia's Aboriginal mysticism. Luhrmann also shot several different endings to his film and the rigging used to allow him to switch tracks is painfully obvious. The director lets down his "Moulin Rouge!" star with a thud. Kidman is awful in this, a victim of Luhrman'ns copycating, whose attempt to reflect the acting style of another age becomes a cartoon. In Nullah's opening narration, she is introduced as he first saw her, striding up to Faraway Downs with her fists pumping so furiously she looks like she's in a military band. The actress seems to come into her own a bit during the drove, but the film's final act is given to Jackman. He, surprisingly, gets away with all of this, even playing the studly hunk, perhaps because he doesn't appear to take himself too seriously and acts like he's in a film being made in 2008. Thirteen year-old newbie Brandon Walters has a natural presence (and fabulous eyelashes!) and uses a soothing lilt to deliver the frequent bouts of narration. Production and costume designer Catherine Martin ("Moulin Rouge!"), Luhrmann's wife, gives Faraway Downs and 1940-era Darwin a Western Outback look. Cinematography by Mandy Walker ("Lantana," "Shattered Glass") is notable for its sweeping vistas. Original music by David Hirschfelder ("Strictly Ballroom," "Elizabeth") covers so many genres it never develops a personality of its own. "Australia" is a big sprawling movie that has its moments, but its crazy patchwork of incoherent style leaves the film emotionally unengaging.