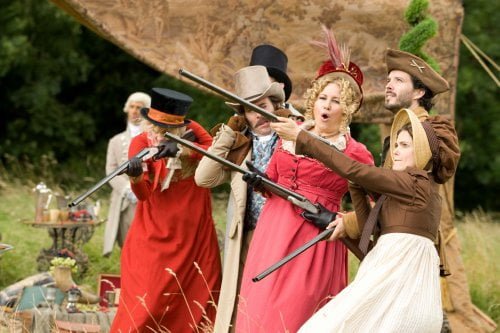 Jane Hayes (Keri Russell) loves all things about another Jane who created the iconic symbol of male sexuality in her character, Mr. Darcy. Hayes is duped by an unscrupulous travel agent who talks her into spending her life savings to make her dream trip to “Austenland.”

Jane Hayes (Keri Russell, FX's 'The Americans') works in a cubicle during the day and immerses herself in all things Jane Austen at home. Her obsessive adoration of Mr. Darcy has driven off prospective dates so when she considers spending her life savings on a trip to a Regency theme park, her best friend Molly tries to convince her her money would be better spent on a more traditional vacation. Jane will not be deterred, though, and has a rude awakening when she arrives at "Austenland." Movies like "Westworld" and "Jurassic Park" have tackled the theme-park-vacation-gone-awry' idea before, but this is the first that could be called a chick flick. Unfortunately any attempts to layer Austenisms into this tale by cowriter (with the novel's Shannon Hale)/director Jerusha Hess (writer "Napoleon Dynamite") are swamped with low brow humor and sheer silliness. Even Colin Firth rising from a pond completely starkers couldn't save this outing. An early warning sign arrives in opening credits noting "Twilight" novelist Stephenie Meyer as producer, her imprimatur not exactly a signifier of literary quality. We meet Russell fending off the unwanted attentions of an office dweeb who clearly thinks she's damaged goods. Her apartment is all pink and chintz and embroidered cushions and Colin Firth cardboard standups. Arriving at Heathrow in costume, Jane meets Miss Elizabeth Charming (Jennifer Coolidge, "Legally Blonde"), a clueless vulgarian with plans for "Austenland's" actors more befitting those of "Exit to Eden." Park owner Mrs. Wattlesbrook (Jane Seymour, 'Dr. Quinn, Medicine Woman') informs Jane she's been given the name Miss Erstwhile for her stay and that as she's the only guest with the basic package, the others in 'elite' status, she won't be able to partake of the full complement of activities. So far, not bad - Jane's going to deal with some real Austen class consciousness. After a carriage ride to the main house, Elizabeth's given a huge suite while Jane's boarded in an upstairs servant's room. At dinner, she's introduced as a poor relation to Mr. Henry Nobley (JJ Feild, "Centurion"), the park's Darcy stand-in, Colonel Andrews (James Callis, TV's 'Battlestar Galactica'), Wattlesbrook's drunken husband and third guest Lady Amelia Heartwright (Georgia King, TV's 'The New Normal') and things go quickly downhill, Jane being the only guest adept at Austen-style repartee. Her only refuge from boredom is carriage driver Martin ("Flight of the Conchords'" Bret McKenzie) who flouts park rules to flirt. Jane uses her cell phone to call Molly, who recommends she take control of her own story, but when the illicit electronic is discovered in her room, Wattlesbrook moves to expel her. Her rescue comes from an unlikely source, but there are strings attached. It's immediately evident there's something fishy with the way Jane's 'play' is working out, Martin's disdain for his workplace making his woo of one of its customers highly suspicious. And despite Jane and Nobley's paralleling of 'Pride & Prejudice,' nothing else about Austenland has anything to do with Austen. The introduction of Captain George East (Ricky Whittle) from the West Indies is this film's idea of punning and a Black man as a viable suitor, no matter how charming, wouldn't have made an appearance in an Austen drawing room. That he behaves like Isaiah Mustafa in Old Spice commercials is ridiculous, as is the tiki-themed poolside setting the actors retire to. The movie just becomes loud and ludicrous. The little known JJ Feild is good enough here that he deserves better and King has one very funny moment overacting in character, but everyone else just seems clueless, underhanded or just plain dumb. Russell's treading water and should harken back to her highly regarded television show before anyone notices. Even though the film wraps everything up in a romantic comedy ribbon, it goes through so many contrivances to get there it's tangled up in knots. The chick flick label has never been a laudatory one, been "Austenland" devalues it. This is a rare Sony Picture Classics misfire.

Keri Russell has proved her acting chops in the Cold War drama series, “The Americans,” but her roots have been in light romantic comedies. She returns to that form in “Austenland,” a light-hearted little rom-com about a woman who (sort of) gets to live her dream. Jane is so obsessed with her favorite author, Jane Austen, that her bedroom is totally Austenized. She is, unwittingly, conned into spend everything she has saved to live her fantasy (for two weeks). She arrives at the specialized resort only to learn that she bought the bare bones econo package. While the other guests are costumed as the wealthy characters in this Austen world, Jane learns that she is to be housed in the servants’ quarters and is plainly garbed. But, Jane makes the most of it, especially with the possibility of finding romance. The three guests at the exclusive resort are given appropriate Austenized monikers with Jane dubbed Miss Erstwhile. The other two visitors, there on a much more plush package, are named Miss Elizabeth Charming (Jennifer Coolidge) and Lady Amelia Heartwright (Georgia King) by their host, Mrs. Wattlesbrook (Jane Seymour). The three ladies, getting into their fantasy world, are introduced to Mr. Henry Nobley (J.J. Field), Colonel Andrews (James Callis) and swashbuckling Captain George East (Ricky Whittle), a West Indian sea captain – all there to romance the guests. Jane, in her subservient role, is attracted to the resort’s handsome stable boy, Martin (Bret McKenzie). But, fraternization with the hired help is not condoned so Jane and Martin must keep their mutual attraction a secret. But, she is also looking for her Mr. Darcy and Mr. Nobley appears to fit the bill, until she and he have a verbal duel. The whole “who will Jane end up with” is played out to expected results – girl gets boy. Keri Russell is okay as a character who acts irresponsibly to live a dream but not one who garners much sympathy. The other players in this romantic comedy are not given a lot of depth of character with Jennifer Coolidge on board to provide the comic relief as the loud, blousy, wealthy and very American Miss Charming. She is down to earth, despite her money, but the comedy is forced as she says off-color things in a terrible English Accent. J.J. Field has the best arc of character as Mr. Nobley and is the only one given full dimension – by the end. Jane Seymour, as Austenland tyrant Mrs. Wattlesbrook, is almost sinister in how she treats (paying guest) Jane. Co-scribe Jerusha Hess (with Shannon Hale, adapting her novel) debuts as a first time helmer who does not quite have the experience to make more of this rom-com. The story and characters are simply drawn which makes it difficult to feel sympathetic for anyone, especially Jane Hayes. For those who like Jane Austen and the plethora of adaptations of her literature, “Austenland” will have a strong appeal. I am not one of those fans.