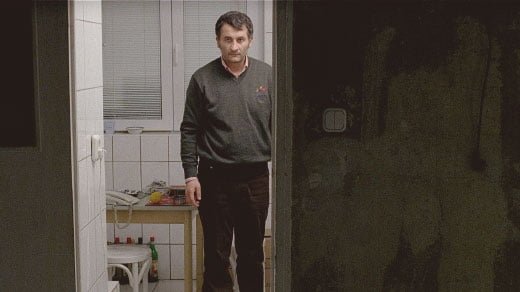 A man (Cristi Puiu) lives a solitary life in Bucharest, having little contact with those around him. Is he suicidal, homicidal or just likes to be alone? He travels around the city, running errands, including picking up a pair of custom made firing pins for a shotgun. You know something serious is going on inside the man’s head, but it is all a mystery in “Aurora.”

A man (Cristi Puiu) follows a woman out of bed to the breakfast table where she tells him how proud she was that her daughter questioned her teacher on a detail of the grandmother's death in Little Red Riding Hood. Talk of fantastical violence sets a bleak and oppressive tone as the man leaves to greet the "Aurora." In the mid 2000's, an explosion of filmmaking talent emerged from Romania, led by Cristi Puiu's "The Death of Mr. Lazarescu" in 2005, arguably the cinematic masterpiece of the entire decade. At that time, Puiu announced that the film was the first of Six Stories from the Bucharest Outskirts, a series dedicated to Éric Rohmer and his Six Moral Tales which would feature cross-pollinated characters in a twenty-four hour time frame (and which could just as easily have been dedicated to fellow Eastern European Krzysztof Kieslowski's The Dekalog). His second of the series travels in the opposite direction of his first - if Mr. Lazarescu was swallowed up by bureaucracy on his final journey, "Aurora's" protagonist wades through it on his way to deliver death. Although he provides observational clues, Puiu demands that his audience deduce relationships and events without providing any background. If we initially think the woman in the first scene, Gina (Clara Voda), is Viorel's wife, we discover we are wrong. In fact we don't even learn that the man we follow is named Viorel until the 1 1/2 hour mark (the film runs 181 minutes and those who cannot abide deliberately paced films like "Meek's Cutoff" should look elsewhere). The man visits a colleague on a factory floor who has cast something for him - firing pins. Viorel stops his windshield wipers to watch a traditional Muslim family walk towards him down the street - is he some kind of terrorist? Later he begins to build a rifle in his apartment (which, pointedly, is in the beginning stages of restoration), getting up three times to will his ringing phone to stop. Is he planning a suicide? By the time we see him shoot a seemingly random couple in a parking garage, we still do not know what to make of things and will not until Viorel tells us himself, in the films final act. If Puiu makes us work to put the pieces together, it's very rewarding to look back on those scenes which mystified us earlier with new understanding. Viorel had no prejudice for those Muslims - in fact, the veiled submissiveness of the wife probably reflected his own world order. Like "Lazarescu," there is symbolism (a water stain on a bathroom ceiling from an overrun upstairs tub) and dark humor (the upstair's husband's attempt to assess the damage). But where "Lazarescu" was a political satire, "Aurora" is more of a psychological mystery, even as it comments on the mind set of a country in an uncomfortable transition. Viorel is always challenging people ('Why are you using that tone?'). In one late scene, he bullies his way into a closed clothing shop, intimidating the two young clerks and owner, demanding to know Andreea's whereabouts (without ever letting on who Andreea is), violence brewing but suppressed. He's sarcastic when he takes his daughter out of a class in mid session. He accuses a man moving items out of his apartment of manipulation and tells his mother (Valeria Seciu) that his stepfather has no right to wear his father's old coat. When he tries to drop his daughter Iluminata (the pure light as opposed to Aurora's half light?) off with his mother's neighbor, Mrs. Mioara (Luminita Gheorghiu, the EMT who stayed with Mr. Lazarescu), he shows little gratitude, instead making the request a series of negotiations. Monetary negotiations are everywhere in "Aurora," too, beginning with Gina's assessment of a designer silk gown bought at a discount by another man and Viorel's demand of a loan repayment at his place of work. Of queuing in a crowded tax office all day for a 5% rebate we hear 'what some people won't do for money.' These transactions are even in background action - when in Mrs. Mioara's apartment, her husband sits on the couch trying to negotiate a cheap rate from his nephew for a new kitchen. Even in the final act in the police station, Puiu puts cops arguing about a recommended mechanic's charges in the forefront. A people consumed with the money and trade they didn't used to have are always on the lookout for being cheated and getting a deal, two sides of the same coin amounting to a kind of moral bankruptcy, the wages of a capitalistic democracy. Puiu is terrific in his own film, keeping us guessing until the very end, calm but prickly in the face of opposition. Befitting the film's slow-building mystery, the camera is usually placed at a two-shot distance or further, often using the 'can't quite see around the corner' technique Polanski used to rachet up suspense and dread in "Rosemary's Baby." When we finally hear, along with police, Viorel's confession, once again, everything must be repeated (another technique used throughout), with Viorel expressing concern for providing the detail needed on police forms (which must be filled out in duplicate), his last challenge a demand that his deeds be understood. The Bucharest police department just continue with their routine.

We have been presented with three films, in recent months, which bring to light, at least to me, subjects that I did not know about. (And I call myself a history buff.) “Hidden Figures” tells the true story of three African American women, well educated, who burst the racial barrier in 1960s NASA and did the math that guided John Glenn in his historic Earth orbit and safely back again. “A United Kingdom” tells the true story of the romance and marriage of Seretse and Ruth, a black man and a white woman. This is similar in tone to the other true life interracial marriage story of last year, “Loving” - that film was about two average people who stand up to the bigotry and race hatred in their home state of Virginia, culminating in a Supreme Court decision (in there favor, if you had not guessed).. Amma Asante, who came to international acclaim with “Belle (2013),” brings us this modern fairytale fable of true love that shines throughout international adversity. In this case, it is with Seretse, in line for the Botswana (then Bechunaland, a British protectorate, not colony) throne who married white commoner, Ruth. Of course, the marriage is not just controversial in his home country. It becomes an international scandal drawing the ire of the British government and apartheid-controlled South Africa. Love, as we know, will prevail over adversity. David Oyelowo and Rosamund Pike have terrific chemistry as the young couple bucking the system and both give solid, convincing performances. Oyelowo gives his character the royal dignity, intelligence and dedication to his country, but, more so, loyalty to his wife. Rosamund Pike conveys radiance and kindness and a real love for her husband and his, becoming her, people. Asante, while focusing on the love story, also uses the backdrop of British imperialism after the war to show, even though the empire is fast shrinking, as it tries to maintain iron control over its remains. The new age, though, means independence, sometimes hard fought, for the colonies and, in the case of Botswana, protectorates. (Look up the difference between the two,) With “A United Kingdom” we get a love story and a quiet revolution that propelled Botswana to independence and, because of mineral wealth including diamonds and copper and an honest government (led by Seretse then and by his grandson now), to prosperity, the most prosperous in Africa.