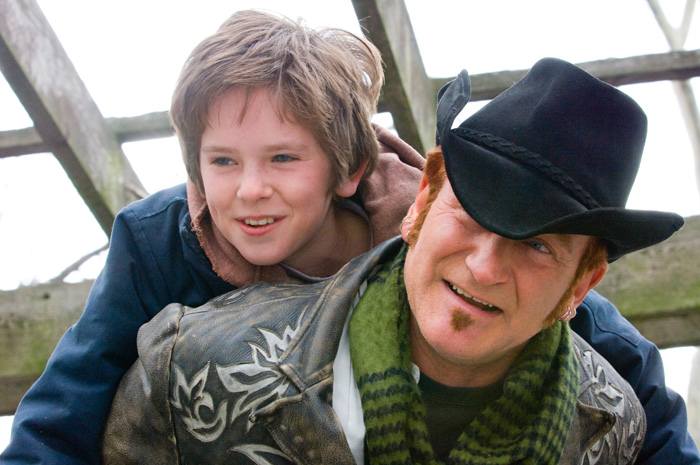 Twelve years ago, Lyla (Keri Russell) and Louis (Jonathan Rhys Meyers), she a classical cellist and he a rock guitarist, shared a magical night, falling instantly in love. Fate would separate them and the product of that wonderful night, a beautiful baby boy, was born and taken from his mother without her knowledge. The orphaned child, Evan (Freddie Highmore), though, knows that his parents are alive and he believes that the music that lives in his soul will bring his family together in “August Rush.”

Director Kirsten Sheridan, with a screenplay by Nick Castle and James V. Hart (adapting the original story by Castle and Paul Castro), tells a sentimental, not syrupy, trio of stories, that intertwine, of a tiny family separated before they even has a chance to start. Lyla is a gifted but sheltered musician who, at just 20, is destined to become a cellist of renown. Louis is a charming Irish singer-songwriter playing, with his band, in Manhattan. Their paths cross when both are invited to a party and they meet on the rooftop when each wants some privacy from the crowd. As they sit, overlooking Washington Square they are serenaded by a street musician’s haunting rendition of Moondance. The magic of the music draws them together and they spend the night in a flush of romance and love. The next morning, they vow to each other to meet but Lyla’s controlling father spirits her away to her next concert before this can happen. Louis, seeing her leave, believes that she just does not care about him. Their night of love has an unexpected by-product when Lyla learns that she is pregnant. Her father, Thomas (William Sadler), keeps her under his thumb and, when she is in a car accident, he tells her that the unborn baby had died. Despondent, Lyla gives up her music and her career. At the same time, Louis, grieving the loss of his true love, abandons his singing and songwriting. Neither knows that their love child is being raised in an orphanage in upstate New York. The boy, Evan, has a natural affinity to music and is able to build a concert in his head from the wind blowing through the tall grass and the hum of insects. Music is such a part of his life that Evan knows, in his heart, that his parents are alive and, if he brings the music to them, he will reunite his long estranged family. His quest, after running away from the orphanage, brings him to New York City where he meets a young black street musician, Arthur (Leon G. Thomas III). Arthur grudgingly befriends the boy and takes him to the derelict Fillmore East Theater where he lives with dozens of other homeless kids, most of whom are also musically inclined. Wizard (Robin Williams), a Fagin-like character who acts as surrogate father and manager to the kids, leads this Dickensonian clan of street performers. He allows Evan to stay and is awakened when the boy borrows his guitar, the first he has ever held, and creates a masterful, energetic tune. Wizard knows he has someone very special on his hands and nurtures the boy’s natural music talent, profiting from Evan’s ability to draw a crowd – and great tips. An unexpected opportunity falls upon Evan, now named August Rush by Wizard, when his music is deemed good enough to get him into the Julliard School of Music. He astonishes the school’s dons with his magnificent ability and his first composition, August’s Rhapsody. He is invited to conduct his premier opus at a concert in Central Park. He knows that this is the spark that will fulfill his quest. He does not know that the wheels of his long hoped-for family reunion have already been put in motion, separately, by Lyla and Louis. While this story of extraordinary people pulled apart by circumstance and brought back together by faith is a nice one, there are two reasons to see “August Rush” – the incredible original score and music and Freddie Highmore. Highmore is a charismatic presence as Evan/August and the young actor imbues the character with a true wonder and understanding about his music. From the beginning, when you first meet Evan, he is convincing as a lad who sees the world and its sounds as instruments for his composition. When he first takes up Wizard’s guitar, the youngster is convincing as the beatific prodigy. Then, there is the original music by Mark Mancini. At the beginning of the film, we see Lyla perform a classical cello solo. At the same time, Louis is making his own music with his band at a gig. Mancini shows the contrasts between the two musical styles but soon begins to meld them together into an organic one. There are also August’s original compositions and their energetic execution that are underlined with an impressive percussive beat. The great rock classic, Moon dance, is used to fine affect as that tune in integrated into the music of August Rush. Keri Russell and Jonathan Rhys Meyers give solid, if less dimensional when compared with Highmore, performances that make you want them, and their son, rejoined. The rest of the supporting cast, led by the versatile Terence Howard as a sympathetic child services agent, fill out the background characters nicely. Techs are top notch across the board with John Mathieson’s expert lensing blending well with the music. Production design and locations – from Carnegie Hall to Central Park’s Great Lawn to the battered Fillmore East Theater and more of New York City – add to the film’s depth of place. If you appreciate a well-crafted fantasy tale that is a showcase for its young star and its great music, then you might just like “August Rush.” I know I do.