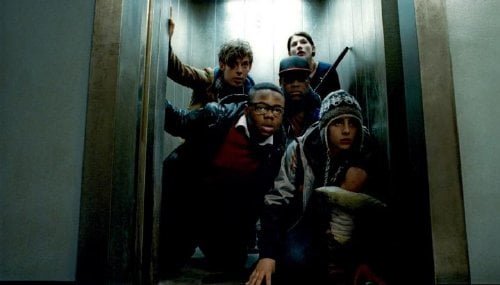 Sam (Jodie Whittaker) lives in a tough South London housing estate and, on her way home, she is mugged by a street gang led by Moses (John Boyega). During the crime, though, an object comes crashing to Earth and a creature emerges, attacking the gang leader. Sam, Moses and his hoods join forces to get the beast but a much bigger invasion is in the works. The creatures unleashed are intent on destroying everything as they “Attack the Block.”

On her way to her new home at South London council estate Wyndham Tower, nurse trainee Sam (Jodie Whittaker, "Venus") is surrounded by a half dozen young thugs wearing hoods and scarves. After giving over her phone, she manages to get away when a bright object, which everyone believes is a stray firework, crashes through the roof of a parked car. The group's leader, Moses (John Boyega), investigates and is attacked by something he thinks is an ugly dog, but when his gang hunts it down and kills it, they discover a creature like nothing they've ever seen before. They take it back to the Tower as potential treasure, but the creature's species come looking for it, raining down in the night sky, determined to "Attack the Block." Writer/director Joe Cornish makes his feature debut with a kick of a potential cult film that works on two separate levels. On its surface, "Attack the Block" is about unlikely heroes saving the world from an alien invasion. But those aliens, jet black spiky-furred blind wolf-apes with rows of glow-in-the-dark teeth, are a metaphor for all the obstacles Moses and his mates face every day - racial and generational intolerance, poverty, abandonment, drugs and the lure of ill-gained cash. While Sam and an elderly neighbor discuss 'those monsters' who mugged her, Moses, Dennis (Franz Drameh, "Hereafter"), Pest (Alex Esmail), Jerome (Leeon Jones), Biggz (Simon Howard) and Tonks (Selom Awadzi) make their way to the top of the Tower, where local drug dealer Hi-Hatz (Jumayn Hunter, "Eden Lake") lives. Ron's (Nick Frost, "Shaun of the Dead," "Paul") reluctant to let them into 'the pot room,' until Hi-Hatz himself intercedes and allows them to store their dead creature there. He also offers Moses the opportunity to street some of his product. But before Moses can become a made man, the police match him and the gang to Sam's description and arrest him. Aliens attack and Tonks and the cops are killed. Now Moses believes they'll be branded cop killers well before anyone will listen to their story. Along with younger hangers-on Probs (Sammy Williams) and Mayhem (Michael Ajao), the kids try to battle the beasts, but soon they're driven back into the Tower and barge into Sam's as safe haven. Cornish, who claims inspiration from John Carpenter's "Escape from New York," does a great job setting initial perspectives from both sides of the fence. Once the young thugs realize Sam lives in their block, they begin to try and mend those fences, but Sam takes longer to win over, even once she sees they're her only hope of survival. Eventually the entire group learn what the aliens are after when they make a crucial observation under the pot room's black lights. Weed customer Brewis (Luke Treadaway, "Brothers of the Head," "Heartless") just happens to be a zoologist nerd who offers additional insights. American audiences will need to keep their ears open to get past the heavy South London accents, but will be rewarded with clever slang (Moses's regal 'allow it' could become a catch phrase). The low budget alien monsters could almost have come from the Henson studios, but Cornish manages menace with them, no mean trick (the aliens engage in some really bloody flesh shredding). Action scenes are packed with chases in stolen police vans, bicycles, motorbikes and skateboards. The locals' weaponry is all home grown - fireworks (Pest's speciality), samurai swords (Dennis's) and nasty looking knives. Sam's eventual pre-climax turnaround is a sensitive piece of writing with a Spiderman quilt as its moving hook. The cast is made up of a lot of first timers with Boyega in a true breakout role - the young man has command. As his girlfriend Tia, Danielle Vitalis and her posse comprise a Greek chorus with some serious chops of their own. Frost and Treadaway are used for comic relief. That said, "Attack the Block" should have more laughs than it delivers, though. The film's social observations needed beefing up with more satire. But Cornish has delivered a thoughtful film with a strong redemptive through line and it's not every day you expect to find that in an independent alien pic. And it's a load of fun.

British TV writer-director Joe Cornish turns to the big screen to make his debut feature for “the producers of ’Shaun of the Dead.’” The result is another of the “kids must fight the invading aliens and save the world” flicks (most recently with “Super 8”), this time in the East End’s Wyndham Tower block. Here the alien warriors are eyeless black furry blobs, a cross between a large dog and a bear, with blue neon mouths – and zero personality. One thing I like about “Attack the Block” is the character Sam. Jodie Whittaker plays a strong-willed and intelligent heroine who has her act together and can stand up to the toughest thugs in the ‘hood, including Moses. Sam reminds me of the kind of strong-willed, spirited women that Howard Hawks used so well as foils to his male leads. Think of “Red River,” “The Thing (From Another World” and “To Have and Have Not” as good examples. Sam is not one of the plump lipped femmes from the “Transformers” but a hard fighting, tough pragmatist. The rest of the guy cast does a decent job in their efforts to stop the alien invasion. Such question as: why are the aliens invading the East End? How come they did not land in New York’s Hell’s Kitchen of LA’s South Central? Obviously, they are here for a street fight. That is why the world capitals were not chosen, I guess, because they are too much of a bunch of pussies. But, this is a sci-fi kids-against-aliens action flick and that target audience is considerably younger than me. “Attack the Block” is an entertaining monster versus man actioner but it is not new or fresh. And, the monsters are nondescript, making them a simply an obstacle for the street fighters, not a threat to the world.