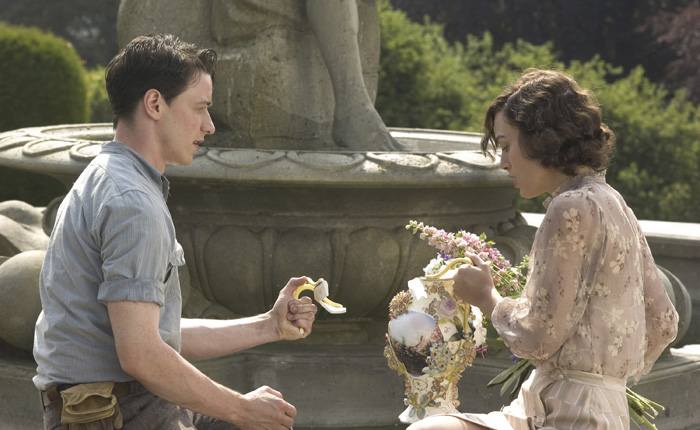 Upper class, privileged 13 year old Briony Tallis (Saoirse Ronan, "I Could Never Be Your Woman") is an aspiring writer, trying to convince her cousins to rehearse her first play on the hottest day of the year. Unsuccessful, Briony spies on her stunning older sister Cecilia (Keira Knightley, "Pride & Prejudice") and the housekeeper's son Robbie (James McAvoy, "The Last King of Scotland," "Becoming Jane"), in a sexually charged moment. When Robbie entrusts Briony with a letter, her overheated imagination takes hold and later that night her testimony regarding a horrible crime will find her spending the rest of her life trying to make "Atonement."

No sophomore slump for British punk wunderkind director Joe Wright, who made "Pride & Prejudice" fresh again two years ago. If anything, "Atonement," adapted from Ian McEwan's magnificent novel by Christopher Hampton ("The Quiet American") is even better, the tragedy of the story intensifying the romance, the novel's unique structure providing an uncommon literary twist. Even for those who have read the novel, Wright's vision will sweep you up again. For those who haven't, the less said about the story the better. Suffice to say, after Cecilia realizes that she loves Robbie, Briony's cousin Lola (Juno Temple, "Notes on a Scandal") is sexually attacked that evening and Briony fingers Robbie as the culprit. He is taken away on her testimony and later fights during WWII at Dunkirk rather than continue his prison sentence. Leaden with guilt, Briony (now 18 and played by McAvoy's "Rory O'Shea Was Here" costar Romola Garai) becomes a nurse in London and continually tries to reconcile with her sister, who refuses to answer her letters. From the film's opening moments, which mimic "Pride & Prejudice's" long take on its protagonist parading about the ancestral manse, introducing other family members, Wright puts his theme - the written word - front and center with the clacking of typewriter keys tunefully segued right into Dario Marianelli's ("Pride & Prejudice," "The Brave One") incredibly inventive score (which also incorporates the sound of a breaking vase as the last note of a more highly charged segment). The "Rashomon"-like structure between Briony's imagination and reality is played through to the bitter end, where Briony, now played by Vanessa Redgrave, is being interviewed on the occasion of her 21st novel, "Atonement" (by director Anthony Minghella). And Wright proves himself adept not only with period romance, but with war. Extensive sequences that follow Robbie's heroic service convey the expansive brutality of battle with moments of horrific poetry. The cast is uniformly excellent. Newcomer Saoirse Ronan and well matched with Garai and the older actress picks up on the dawning realization Ronan leaves us with, capitalizing on it at a climatic wedding that makes a five year old truth painfully, shamefully clear. McAvoy has yet to disappoint, and his passionate Robbie is indelible, most notably when confronting his accuser years after the fact. Knightley has never seemed more adult and invests Cecilia with a careless style and elegance that hardens into cold despair. Also notable are Juno Temple spanning years as Lola, Benedict Cumberbatch ("Starter for Ten," "Amazing Grace") subtly tipping us off to the truth, a subdued Brenda Blethyn ("Pride & Prejudice") as Robbie's worried mom and Jérémie Renier ("L'Enfant") as a dying French solider. The entire production is top notch, beautifully photographed by Seamus McGarvey ("The Hours," "World Trade Center") in first a nostalgic glow, then later, in harsher light. Costume design by Jacqueline Durran ("Vera Drake," "Pride & Prejudice") is Oscar worthy, from an iconic bottle green silk dress worn by Knightley to the disheveled, cheap robe she later wears in London. We feel the texture of wool in the soldiers' period uniforms and the red 'X' emblazoned across Briony's nurse's garb is the liar's equivalent of an adulterous 'A.' If there is one small nit to pick with Hampton's faithful adaptation, is it the failure to emphasize thirteen year old Briony's crush on Robbie, which lent further layers to her sexual confusion in the book. But the story has been so sweepingly realized, so stunningly visualized it isn't immediately evident. "Atonement" is a classic romantic tragedy which weaves its own literary source into the structure of its story.

This is the sophomore feature film by Ali Ahmadzade and it is a whirlwind of a movie as it follow the heroines as they drive around Teheran at night. Most of the film takes place in Arineh’s car as the girls, a bit tipsy after partying, drive home. They give a friend a ride when, bam!, they have a fender bender. And, they do not have the money to pay off the other driver because the country’s ATM machines are unavailable for the night. This one moment of distraction is where “Atomic Heart” turns 180 degrees from where I thought it would go. This change of direction makes the film a psychological thriller where danger lurks in the guise of the mysterious stranger. The seeming innocent initial kindness by the man is anything but as he makes demands and coerces the girls to do his bidding. The building terror the two women feel is palpable. At the turn of the new millennium Iranian films became a world phenomenon with such works as Bahman Gobadi’s “A Time for Drunken Horses (2001)” and Mohsen Makmalbaf’s “Kandahar (2000).” Now, with films like “Atomic Heart” and “Jafar Panahi’s Taxi,” it looks like the Iran Spring may be upon us again. “Heart,” in particular, represents a cultural awakening in a fundamentalist country that comes out in the forward thinking dialog and philosophies – including a discussion that, amusingly, deals with American toilets. Mirth and danger are combined in equal parts with deft skill.