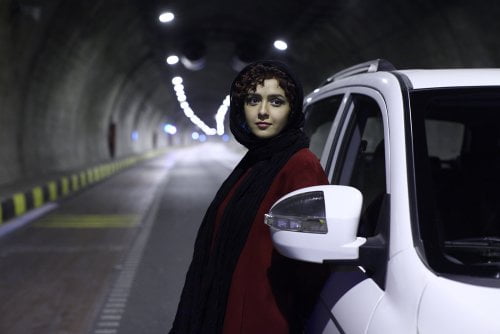 Arineh and Nobahar are on their way home from a wild party when they have a car accident. A stranger intervenes to sort things out and pays off the other driver. This kindness begins to take on sinister proportions when the man coerces the two young women to drive him on his nocturnal mission in “Atomic Heart.”

Arineh ("About Elly's" Taraneh Alidoosti) whiles away some time creating rhythm with an elevator door sensor. She and her friend Nobahar (Pegah Ahangarani, "Women's Prison") are a little drunk as they make their way home, stopping to talk to their friend Kami (Mehrdad Sedighian) about such things as Pink Floyd's 'Atom Heart Mother' (the film's Iranian title) and his apocalyptic dream. But when they get in an accident, the good Samaritan, Toofan (Mohammad Reza Golzar), who helps them out, insists they repay him by driving him to his destination. Already a little rattled by some of his comments, things get increasingly bizarre when he has them consider an alternate world in "Atomic Heart." With his sophomore film, cowriter (with Mani Baghbani)/director Ali Ahmadzade ("Kami's Party") establishes himself as a major new voice in Iranian cinema. He may be following the lead of elders like Kiarostami and Panahi with a film that largely takes place in a car, but that is where the similarities end, Ahmadzade's trippy road trip highlighting a much more open, Westernized society than we're used to seeing in Iranian cinema. That his characters are put between a rock and a hard place by Iran's subsidy reform plan and Saddam Hussein's WMDs suggests an intriguing political statement by way of reality and fantasy, just as a game of rock-paper-scissors resolves a life-and-death situation with child's play. Not only are our female protagonists a bit tipsy, but they're sporting unnaturally colored hair beneath their bright head scarves. They're relaxed with their hip male friend Kami, but his teasing about Arineh's inept driving doesn't help them avoid the notice of police. The cops seem more concerned with Kami's dark glasses than the girls' obvious intoxication, let alone their traveling the wrong way down a one way street, but no sooner have they resumed their journey than they plow into another car. Hoping to avoid coming under scrutiny once again, they offer to pay damages, but the city's ATMs are all in service to subsidy transfers and they have no cash. That's when the stylish and handsome Toofan steps in. No sooner is he in their car, then he mentions he's a friend of Bashar's. Later, after Nobahar's urged Arineh to drive off, he'll return with an older friend, a man he introduces as Saddam although 'he doesn't like to be called that.' Up until this point, Ahmadzade's film has been playful, a journey through the night with Nobahar pulling at gummy worms, continually asking Arineh to find stops because of her frequent needs to pee which in turn leads to an entertaining discourse on the evolution of the Western toilet. The tone of the film changes dramatically, however, beginning with Nobahar's dismay that Arineh has explained to Toofan that her weak bladder is the result of her MS. Toofan becomes physically abusive when Arineh is out of sight, then insists they stop in a tunnel where a door marked 'C27' leads, he says to a parallel world, perhaps where Saddam's WMDs were really hidden. Is Toofan, with his movie star looks, expensive attire and dubious connections the spectre of Middle Eastern strife? Ahmadzade has described his film as reality transitioning into a dream, so perhaps his boogeyman is a nightmarish representation of nuclear fears. With "Atomic Heart," he's created a fascinating, funny, frightening film. Grade:

This is the sophomore feature film by Ali Ahmadzade and it is a whirlwind of a movie as it follow the heroines as they drive around Teheran at night. Most of the film takes place in Arineh’s car as the girls, a bit tipsy after partying, drive home. They give a friend a ride when, bam!, they have a fender bender. And, they do not have the money to pay off the other driver because the country’s ATM machines are unavailable for the night. This one moment of distraction is where “Atomic Heart” turns 180 degrees from where I thought it would go. This change of direction makes the film a psychological thriller where danger lurks in the guise of the mysterious stranger. The seeming innocent initial kindness by the man is anything but as he makes demands and coerces the girls to do his bidding. The building terror the two women feel is palpable. At the turn of the new millennium Iranian films became a world phenomenon with such works as Bahman Gobadi’s “A Time for Drunken Horses (2001)” and Mohsen Makmalbaf’s “Kandahar (2000).” Now, with films like “Atomic Heart” and “Jafar Panahi’s Taxi,” it looks like the Iran Spring may be upon us again. “Heart,” in particular, represents a cultural awakening in a fundamentalist country that comes out in the forward thinking dialog and philosophies – including a discussion that, amusingly, deals with American toilets. Mirth and danger are combined in equal parts with deft skill.