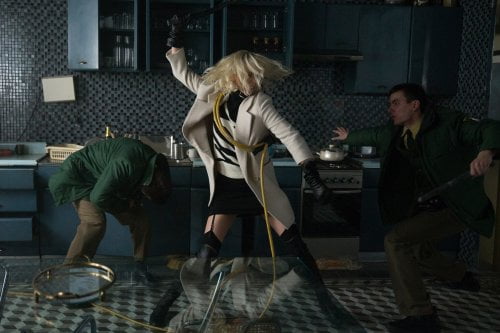 It is 1989 and the Berlin Wall is still intact. MI6's Agent Lorraine Broughton (Charlize Theron) is sent into the destabilized city to recover 'the list,' microfilm containing information on all Allied undercover operatives, including Satchel, the double agent whose identity everyone wants to know. It was delivered to Allied spy James Gasciogne (Sam Hargrave) by East German agent Spyglass (Eddie Marsan, "Their Finest," "The Exception"), but stolen by the KGB's Yuri Bakhtin (Jóhannes Jóhannesson) when he brutally murdered the agent. Lorraine is distrustful of embedded station chief David Percival (James McAvoy) when she's immediately made by the KGB, but they need to join forces to get Spyglass, who has memorized the list's contents, out of East Berlin in "Atomic Blonde."

Stepping up from codirecting "John Wick," stunt coordinator David Leitch wastes no time plunging us into the dizzying world of skullduggery that is late 80's Berlin. Producer Theron, whose training overlapped Keanu Reeves's, is such a sexy, lethal presence, one cannot look away, even as the bone-crunching, body-bruising violence makes us cringe. The color coded production offers clues while inviting us into an artful world of cinema, New Wave and punk. About the only letdown here is an overly familiar story (screenplay by Kurt Johnstad ("300," "300: Rise of an Empire") and video game writer Antony Johnston adapting the graphic novel series "The Coldest City"), but Leitch gives it all such an adrenaline kick it hardly matters. We first meet the bruised, black-eyed Lorraine in London at an MI6 debriefing led by the suspicious Eric Gray (Toby Jones, "Tinker Tailor Soldier Spy"). Lorraine objects to the presence of the CIA, Emmett Kurzfeld (John Goodman) sarcastically offering to leave and join the others hidden behind a one-way mirror. She begins to recount her tale. Percival, who thrills to Berlin's black market and decadent lifestyle, is late to the airport, but Lorraine's onto the KGB claiming to be his representatives. With a red spiked heel and a hand on the wheel, Lorraine overcomes the enemy agents, flipping their Mercedes just as Percival's Porsche arrives. Smelling a setup, Lorraine goes along with Percival while operating her own agenda, visiting the Watchmaker (Til Schweiger, "Inglourious Basterds") whose wares contain more than clockworks. With all four quadrants of Berlin circling (out of her league greenhorn French intelligence agent Delphine Lasalle (Sofia Boutella, "The Mummy") provides the film's emotional center with her sultry seduction of Lorraine), Leitch has ample opportunity for action set pieces, the highlights being Lorraine's hand-to-hand combat with KGB behind an East Berlin cinema screen showing "Stalker" and a jaw-dropping single take in which Lorraine takes out nine KGB and Stasi agents using rope, lamps, a corkscrew and everything else at her disposal. To cast and crew's credit, we feel every hit, Theron athletic and determined, not invincible. The formidable Theron, sporting white blonde waves and a black and white wardrobe (by her "North County" costumer Cindy Evans), is one cool customer, one who literally restores her battered body in ice baths. But we do see emotion, recognized by Lasalle as a softening of her eyes when she tells the truth, something only the audience is privy to as she identifies the body of former lover Gasciogne (watch for German actress Barbara Sukowa as the coroner). Those eyes are hard as nails when dealing with Percival, McAvoy reveling in sleaze, outwardly admiring the statuesque professional threatening his territory (the actor's broken arm was incorporated into the story, McAvoy sporting a cast throughout). She drinks Stoli on the rocks while he keeps Jack Daniels at the ready. Black and white, not just in costume and poison of choice, but in cinematographer Jonathan Sela's ("John Wick") frequent depiction of the city where snow falls and black umbrellas obscure snipers' targets. There are splashes of neon in graffiti and rock clubs, but red is the significant other color, signalling the KGB. (We also get red and white in Marsan's Spyglass, a bullet wound spilling blood as his face grows ashen.) The film's soundtrack will delight fans of the era, the action propelled by David Bowie, New Order, Public Enemy, Nena, Siouxsie & The Banshees, George Michael, ’Til Tuesday, Depeche Mode and A Flock of Seagulls. 'Who won, and what was the f'ing game anyway?' Percival asks in a direct camera address near the film's end. Just when you think you know the answer, stick around. The movie might seem like it's over but the gig's not up yet. "Atomic Blonde" is a sexy, ultra violent action film. Theron is sensational. Grade: