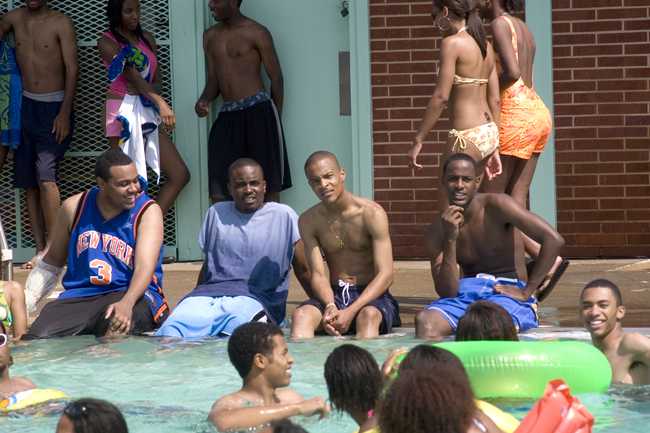 Rashad (rapper T.I. of Pimp Squad Click) is a talented teen who enjoys hanging with his crew Esquire (Jackie Long), Teddy (Jason Weaver, "The Ladykillers") and Brooklyn (Albert Daniels). But Rashad's already got a man's burden, trying to keep his younger bro Ant (Diana Ross' son, Evan Ross Naess) on the straight and narrow while easy money beckons and dealing with the fact that his girlfriend New-New (Lauren London) is from such a different social strata she may as well not live in the "ATL."

Video director Chris Robinson makes an assured debut with this tale of Black urban youth that eschews gang warfare for class warfare. "ATL" is refreshing without going all goody two-shoe, its four friends and their ties to Atlanta not unlike the bunch of guys in Barry Levinson's Baltimore "Diner." It's not like Rashad doesn't have exposure to the north side of town where the Buckhead swells live. His own best buddy Esquire aspires to the country club life, working as a caddy and attending private school. In stark contrast, Teddy's not in school at all, instead holding down a job at Eddy's Gold Teeth while poetic Brooklyn gets fired from one place after another. The seemingly mismatched quartet all move to the same groove though, come Sunday nights at the Cascade, the popular roller skating rink where all of Atlanta seems to compete. It's here that Rashad crosses paths with New-New and begins what is perhaps his first serious romance, a distraction when Ant's head is turned by the flashy wheels of local dealer Marcus (Big Boi). Good strong values anchor "ATL," but it never feels heavy, perhaps because Robinson keeps it light on its feet. The Swann brothers' guardian, Uncle George (Mykelti Williamson, "Forrest Gump," "Ali"), is a good example of how not to live one's life as well as an obstacle for Rashad, but he's also a good comic foil at the all male breakfast table and gets his own redemption along with Ant. And lest New-New's story be too serious, she's paired with a couple of South Side twins, Veda (Khadijah, "Sky High") and Star (Malika, "Sky HIgh"), whose taste for high couture gets them into trouble with their equally colorful mother. Antwone Fisher's story tells the high and mighty, like John Garnet, CEO of United Express (Keith David, "Crash") and New-New's father, not to forget their roots while also encouraging the ambition that got him there. Screenwriter Tina Gordon Chism ("Drumline") uses words to underscore the class differences Fisher puts forth ('You can take the piss in the hallway, I'll take the Picasso' - Esquire to the newly outed New-New). The cast are all fine, with T.I. in particular proving a charismatic lead. Daniels colors Brooklyn slow and sweet, a twist on the stereotypical New Yorker while Weaver winds up native Atlantan Teddy. Big Boi is smoothly cool with a hint of threat as the piece's bad guy. The skating scenes are quite electric, perhaps due to Robinson's background, although the individual competitors' personalities don't get enough chance to shine. On the other hand, Robinson has resisted the temptation to turn his flick into a bit of roller boogie in lieu of keeping Rashad's concerns front and center and that's a good thing. The film features a boffo opening with Hip Hop doing a discordant duet to Ray Charles' "Georgia" that defines the two sides of the city.

Rashad (Tip Harris) is bright, 17-years old, a talented artist and should be enjoying his life as a teenager in Atlanta. But, since the death of his parents he has had to become the man of the house and take care of his little brother, Ant (Evan Ross). This is not easy, though, because there is trouble around the corner in the guise of a flashy drug dealer who tempts the boy with the offer of respect and fast money. The only time Rashad can drop his mantle of responsibility is on Sunday nights when he and his friends go to The Cascade and show off their roller-skating skills in “ATL.” The world of urban black families is given a hopeful note as Rashad works hard to be the man in his tiny family, eschewing drugs and guns. “ATL” is a unique film in that it offers an alternative when the parents of the family are no longer around and the eldest must show intelligence, maturity and discipline to become the head of the house and protect his brother. Tip Harris does a splendid job in breathing real life into his stalwart character. The mostly newcomer cast is aided by veteran actors Keith David, Mykelti Williamson and Lonette McKee, who help bring things up a level. David plays John Garrett, a prosperous and prominent member of the community who grew up on Atlanta’s mean street, worked his way out and never looked back. Williamson gives a credible turn as Rashad and Ant’s Uncle George who owns the janitorial business that Rashad works at but acts like the teen is his personal servant, not his nephew. The kids, unlike those in films like “Take the Lead,” look and act like real teenagers. Rashad’s love interest, New-New (Lauren London), represents the chance for a change for the better for the young man - but, she has a secret. His best friend, Esquire (Jackie Long) is ambitious and will do anything to get into an ivy-league school. He boldly approaches Garrett for a recommendation and, in the process, learns New-New’s secret. Rounding out Rashad’s extended “family” are the other members of his roller skating team, Brooklyn (Albert “Al Be” Daniels) and Teddy Jason Weaver, who are dedicated to their friend. First timer at the helm, Chris Robinson, moves his cast ably enough and gives the roller skate sequences energy and a good look. The script (from the story by Antwone Fisher) by Tina Gordon Chism is well crafted and done with nuance, providing a positive and hopeful note for the teens coming of age. ATL” is a likable film with an affirmative and hopeful message about the fate of its main players. A good story, decent acting on all levels and expertly handled roller skating choreography should make this little gem do well with the youth market and, who knows, may cause a resurgence in roller skate rinks.