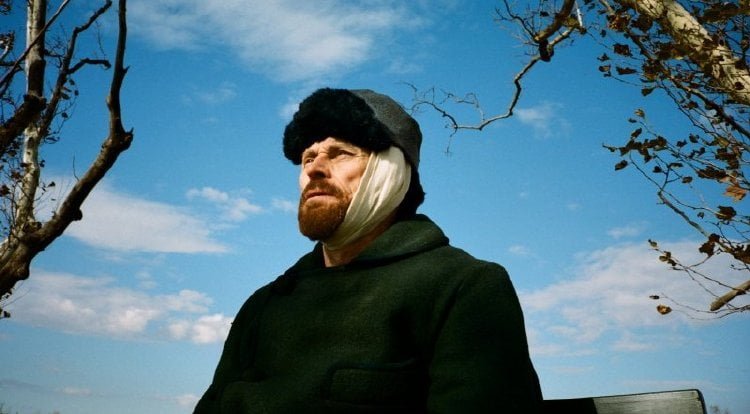 When he met fellow artist Paul Gauguin (Oscar Isaac) in Paris, Vincent Van Gogh (Willem Dafoe) was struggling, unable to sell his work. He tells Gauguin he wants to 'paint what hasn't been seen,' 'bright paintings, painted in sunlight.' 'Go South,' Gauguin advises and Van Gogh would enjoy his most productive period in Arles where nature and the light would be his religious experience placing him "At Eternity's Gate."

While prominent filmmakers have tackled Van Gogh before, most notably Vincente Minnelli with "Lust for Life," last year's animation "Loving Vincent" using the artist's own style, cowriter (with Jean-Claude Carrière and coeditor Louise Kugelberg)/director Julian Schnabel ("Basquiat") is the first fellow painter to shed his own light on the subject. Schnabel's taken a different tack from earlier films, plunging us into Vincent's POV, trying to get us to experience the world as Vincent saw it, revealing his painter's eye. While his results are mixed, some sequences soar, like the ankle level view of a tiled floor and the workmen's boots being shod there suddenly turned still life, gobs of paint somehow adding emotion to the Everyday. The film's opening moments are impish, a black screen accompanying Van Gogh's words about wanting to belong among the people he paints. But when Schnabel gives us a visual, we witness a shepherdess's wariness as the painter tries to make her his subject, Van Gogh so intent on his vision, he fails to notice the woman's mounting fear as he forces her into position. Later a group of curious schoolchildren will draw his ire, their teacher (Anne Consigny) condemning his work, the provincials confounded by a man painting the roots of an upended tree. Still, before the townspeople turn on him and he lands in an asylum, Van Gogh settles into Arles, a postman (Laurent Bateau, as if stepping straight out of Van Gogh's 'Portrait of the Postman Joseph Roulin') arranging for him to rent a run down home. Supported by his loving brother Theo (Rupert Friend), a Parisian art dealer who believes in his brother's talent, Vincent wanders hills and fields, a handheld camera often trained on his feet (cinematography by Benoît Delhomme). Gauguin arrives, Van Gogh reveling in the friendship, both painting Madame Ginoux (Emmanuelle Seigner) in the same session, Van Gogh's quick work contrasted with Gauguin's leisurely pace. Gauguin criticized his friend's haste and also his methods, saying his surfaces look like clay, more like sculpture than painting. His eventual departure plummets Van Gogh into such depression, he slices his ear off with a razor, asking barmaid Gaby (Stella Schnabel) to send it to Gauguin. Schnabel doesn't recreate Van Gogh's paintings on screen, instead showing us the things the man saw, even filming in Arles to capture its particular light. One revelatory scene has the painter in a museum, closeups of differing brush strokes zoomed out to identify their creators. The artist's conversations with Doctor Ray (Vladimir Consigny), then both a madman (Niels Arestrup) and a priest in an asylum (Mads Mikkelsen) and later Dr. Paul Gachet (Mathieu Amalric), an amateur painter and subject, reveal his psyche, what he feels and hopes to express. He finds God in nature, positing to one who doubts his talent (Mikkelsen) that perhaps he is painting for people who haven't been born yet as Jesus was unknown until some thirty or forty years after his death. Some of these passages are oddly edited, fading to black, the score abruptly ending in lieu of dialogue, Van Gogh'swords repeated over the scene which follows, a technique which is oddly both jarring and somewhat dreamlike. The way Van Gogh's death is presented, the man waked in a coffin surrounded by his works, offers accepted by the mourning Theo and Johanna Van Gogh (Amira Casar), is disturbing in its subtext while proving Vincent prescient. Dafoe has given us such a haunted, passionate human, defiant yet humble in his purpose, that we mourn his loss as well. Grade: