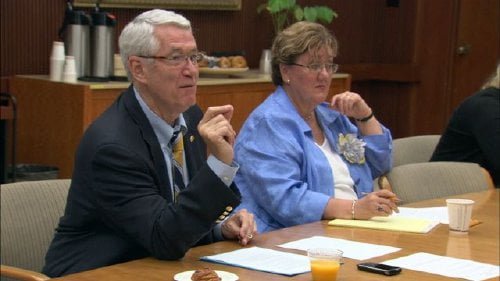 Legendary documentarian Frederick Wiseman has been making films since 1967 (“Titicut Follies”). Since then he has made some 41 documentaries. His latest oeuvre examines the inner workings of the University of California’s Berkeley campus and the trials and tribulations it faces in providing affordable education for the students “At Berkeley.”

Since 1967, documentarian Frederick Wiseman has been making films about American institutions, recently branching out to include French artistic companies, like his most recent, sexy sojourn to Paris's nude dance saloon "Crazy Horse." Back on American soil, Wiseman takes on the huge 1200 plus acre sprawl of public higher education "At Berkeley." One of the great things about the 83 year-old Frederick Wiseman is that he never approaches a subject like the blind men and the elephant - the director presents us with the whole mammal. With "At Berkeley," though, which runs four hours and four minutes, there's the nagging sense that some things have been overlooked. Still, this mostly comprehensive look at the University of California at Berkeley is fascinating from start to finish. Wiseman humorously begins with the legend before going in for the truth. We hear about a myth that the university was founded by two gamblers and a saloon owner, before sitting in on a budget meeting where Chancellor Robert Birgeneau, the clear star of the show here, discusses the distressing trend of government disinvestment in education. Next we leap into the first of many classes, where a discussion on education provokes both an arresting Caribbean perspective and a challenge, one which seems to tickle the fancy of the teacher, from the lone Black student. (Later, an administrator's response to a middle class white student being financial squeezed flies in the face of everything we've heard from this professor). Listening to a couple of students discuss all the factors they must consider in programming a mechanical limb with their advisor is an eye opener. Former Secretary of Labor Robert Reich (who had his own documentary this year in "Inequality for All," which also discusses the value of public education) advises on the value of honest appraisals. We're even given a peak at a teaching assistant teaching new teaching assistants. The ideas which are floated in UC's classrooms are so intriguing, it's like Wiseman has given his audience an extension course. During operational meetings we begin to hear about October 7, gradually learning that this is the date set for a planned protest. Wiseman uses this event to build his work, a springboard to discuss campus security, both physical and virtual, campus policy and the relationship of the university and city. The protest itself is an anticlimatic climax. Birgeneau's assessment of it afterwards is an amused and dispirited appraisal of an entire generation. A couple of musical interludes, one from a female acapella group with a bored audience, another a staged musical number about Facebook, suggests that the spoken word is the more valuable output on this campus, but a late look at a performance by the visiting Kronos Quartet is immensely enjoyable. Wiseman films the opener of a football game from the field, his camera dividing a marching band and players like the parting of the Red Sea. Each of the film's segments are divided by shots of UC's meticulously maintained grounds, so it's a shocker to hear the head of maintenance report he's operating with only one working lawn mower. But while Wiseman has acknowledged the importance of non-faculty staff administration in filming his work, they're given short shrift within the documentary, represented only by one meeting discussing layoffs. We also hear nothing about Admissions. A graduate student discussing how she plans to lay out a technical paper appears to be so nervous talking in front of the camera, it makes the piece feel staged and we wonder why this non-essential bit was included. Student life is only glimpsed in corridors and on the grounds. We never visit any of their off campus hangouts, one street market representing Berkeley culture. And yet there are two scenes of faculty being advised on how to best submit tenure recommendations. While "At Berkeley" may not be as entirely comprehensive as its running time would suggest, it is still a remarkable picture of the workings of a huge social organization. May the extraordinary Wiseman brand continue for another twenty years.

Wiseman’s camera brings us into the classrooms and lecture halls to show the education process at Berkeley. It also enters the world of the university’s staff as they, while on retreat, discuss the future of public education. The teachers get their say, too, as they get together to discuss their plight in this difficult world of higher education. Students also get to speak their minds about their own problems in getting a higher education in this ever-changing world. UC Berkeley, in Wiseman’s film, is a microcosm of the public higher education across the US. How to pay for an education is explored as the administrators at Berkeley try to figure out ways to keep standards high – on a par with private universities like Harvard and MIT. Those institutions thrive on high tuition and the deep pockets of their wealthy alumni. When states like California began funding public college education in the 1950s and 60s, students were given the opportunity for an affordable education paid for by the state. The changing times and worsening economy, though, have put increasing strain on the public education system to maintain quality and keep the costs down for that education Wiseman bridges all the lectures (Robert Reich of “Inequality for All” is a lecturer in one sequence), discussions and retreats with views of life on campus. Shots of students going to class, workers maintaining the university infrastructure, students protesting school policies, ROTC training, new construction and a look at the surrounding community are used to bridge from one group discussion to the next. Interestingly, no titles are used to tell who the players are so it is sometimes hard to figure out the roles of the participants doing the talking. “At Berkeley” is a must for educators facing the same problems as UCB but only hardcore film buffs, especially documentary fans, would consider taking four-hours of their time to see the film. There are many mesmerizing moments that show the technological work done at the school – watching a pair of robotic arms daintily folding a towel, a paraplegic patient trying out a pair of newly developed bionic legs – that are fascinating. But, still, this is a niche film, a well-made and well-told one but with limited appeal. Still, it is a film by a documentary master.