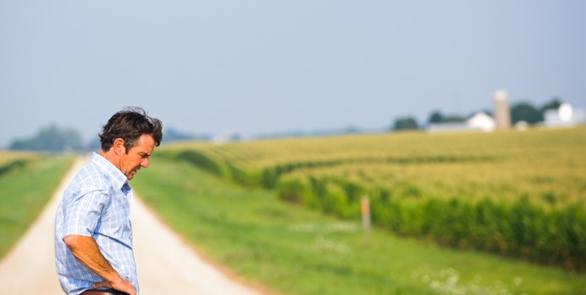 Henry Whipple (Dennis Quaid) is a prosperous mid-Western farmer and businessman whose empire seems assured – and I mean “seems.” His adored eldest son Grant is off on adventures in South America and his moody youngest, Dean, who wants nothing to do with the farm. But, these issues will soon fade as bigger concerns loom over the Whipple farm in “At Any Price.”

Henry Whipple (Dennis Quaid, "Playing for Keeps") is the third generation to run his Iowa family farm, but times have been changing swiftly under his management. He fervently believes in the 'expand or die' mantra, having amassed 3,000 acres and modern farming equipment while also struggling to remain top dog as genetically modified Liberty Seeds district salesman. But he cannot woo back favored elder son Grant (Patrick Stevens) to follow in his footsteps and second son Dean's (Zac Efron, "The Paperboy") passion is race car driving. Henry is sliding into a moral quagmire trying to hold his ground "At Any Price." Cowriter (with Hallie Elizabeth Newton)/director Ramin Bahrani ("Man Push Cart," "Goodbye Solo"), who has championed immigrant underdogs in his independent films, goes to the American Heartland with his first studio film using an all American family to examine the moral rot at the heart capitalism in the U.S. today. But despite its worthy themes, Bahrani has over stacked his deck with Henry's character while leaving too many questions with Dean's just as Quaid emotes to the rafters while Efron underplays. A shocking development at the film's climax just jumps the shark, despite Bahrani's beautiful composition and use of sound. The divide between father and younger son is immediately evident as Henry approaches a grieving family graveside to make an offer on the deceased farmer's land. Dean is an unwilling participant, just as indignant as the dead man's family, but economics prevail and Henry gets the land, 200 acres he intends to gift to Grant. But as it is made clear from the postcards he sends from South America, Grant has no intention of coming back and so Henry refocuses on Dean. But it's Dean's girlfriend, Cadence (Maika Monroe, making her debut), who takes more of an interest, accompanying Henry on his sales trips, showing an affinity for the work. Henry's got more to worry about than his sales numbers, though, when Liberty, an ironically named stand-in for Monsanto, begins to investigate his source of their patented, genetically modified seeds. Meanwhile, Dean outraces the son of his dad's sales rival, which secures him a shot at ACRA, a stepping stone to NASCAR. But he needs $15,000 in order to do it. Mom Irene (Kim Dickens, HBO's 'Treme') secretly gives him the money from her private account. There's so much cluttering up "At Any Price" that it is sometimes difficult to see the corn for the cornfield - sons making the same mistakes as the fathers (Henry tries to live up to his own father Cliff's (Red West, "Goodbye Solo") expectations), father and son both cheating with Meredith Crown (Heather Graham, "Boogie Nights") when they face failure, the changes in American agriculture - that the climatic tragedy which binds Henry and Dean is simply lurid overkill. Unlike his earlier triumph, Dean's eventual failure is so under-dramatized it's confusing and all the excess drama diffuses the father/son parallels. It is telling that with all the male dynamics going on the standout performances come from Maika Monroe who gives Cadence a tough, saucy exterior that hides her need to belong and Kim Dickens, whose smiling, exceedingly competent wife and mother has her own crosses to bear. (Heather Graham, on the other hand, is dealt such an underwritten role she could have been excised from the film entirely - she's a device, nothing more). Quaid pushes the genial salesman part of his character so much, it's hard to see the complexities and Efron suffers the same fate for handling Dean so inwardly. The film also stars Chelcie Ross ('Mad Men's' Conrad Hilton) affecting as Henry's former partner, and Clancy Brown ("Cowboys and Aliens") as Henry's rival Jim Johnson. Bahrani's previous films have been smaller in scope, poetic character studies, so it is disappointing and perplexing to see him throw subtlety to the winds with his 'Big Farma' movie.

On the surface, “At Any Price” appears to be a traditional father/son story of a modern American farm family. Here, though, director Ramin Bahrani, co-writing the screenplay with first-time feature scripter Hallie Elizabeth Newton, gives us a much darker version of the American Gothic. Henry Whipple is a well-to-do mid-Western farmer who is also the distributor for a conglomerate that produces genetically modified (GMO) and patented grain seeds. Business is booming and Henry had once hoped that he would turn the business, when he retired, over to his favorite son, Grant (Patrick Stevens). Grant, though, is a free spirit who roams the world seeking adventure and is currently mountain climbing in South America, eschewing his father’s capitalistic life. That leaves younger son, Dean (Zac Efron), a sullen and moody young man who rebels against Henry and wants to do what he wants to do. He has visions of being a NASCAR superstar and is in training, driving dirt track races to show his dad that he is his own man. Dean’s girlfriend, Cadence (Maika Monroe), does have an interest in the seed business and she joins Henry as he struggles to get a customer back that he lost to his competitor, Jim Johnson (Clancy Brown). It turns out that Cadence has a knack as a salesman and tags along on Henry’s calls. Everything is moving along in the traditional way in “At Any Price.” Then, cracks begin to show in Henry’s business fortress as his friend and business partner Byron (Chelcie Ross) tells Henry that government agents are coming to town to investigate allegations of “seed washing” – collecting seeds left after the harvest and wash and sell them as naturally grown. Henry, we learn, is in the thick of this tawdry business and may lose the farm, so to speak. Dean pursues his racing dream and sells a parcel of land, gifted from Henry, to pay for his career ambitions. While Henry is battling his legal and financial demons, Dean finally makes it to the car racing big league and gets his big chance. Dean and Henry’s story paths and how they deal with their trials and tribulations and family problems are the meat and potatoes of “At Any Price.”. (Did I mention that Henry is having an affair with his secretary Meredith (Heather Graham) that his wife Irene (Kim Dickens) uncovers?) “At Any Price” is a Shakespearean-style tragedy but it lacks an effective screenplay and, especially, more serious actors for the key roles of Henry and Dean. Dennis Quaid and Zac Efron simply do not have the gravitas to convince me that Henry and Dean are real people. It is telling when a supporting character, in this case Cadence, steals the show and shows more depth than either of the stars. Ramin Bahrani (who brought us the enchanting “Goodbye Solo” in 2008) goes main stream with “At Any Price” and I do not think it is a good idea for the up and coming young director to overreach into the Hollywood movie machine. His forte: developing convincing, believable characters that we can sympathize with is cast aside. Here, he gives us two-dimension caricatures that provide no arc of development to their characters. “At Any Price” is an ambitious film but a failed one. I know Bahraini has talent but not for sprawling American family drama, at least, not yet.