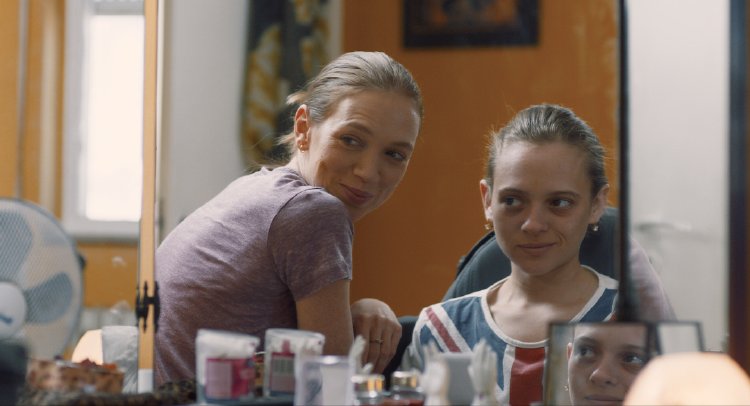 Teenaged Vika (Shira Haas, Netflix's 'Unorthodox') spends a lot of time at a local skate park with her more experienced friend Natalie (Eden Halili), eyeing the boys for a potential sexual partner.  As it turns out, Vika has an entirely different view of the biological clock, which becomes apparent when she lands in the ER for mixing alcohol with her medication.  The lecture she receives from her mother, a nurse at the hospital, is unusually understanding, the hard partying woman more of a contemporary than a typical parent.  As it turns out, though, no one will step up to an unimaginably difficult situation more than Vika’s mother, “Asia.”

Writer/director Ruthy Pribar’s feature debut was not only nominated for thirteen Israeli Academy awards, it won nine of them, including trophies for the film and its two main actresses.  Pribar may set our expectations certain ways, once even making me dread the path she had chosen, but her film isn’t the usual mother/daughter movie, upending cliché time and time again in moving and intimate scenes.  The young filmmaker establishes a strong bond, doing so frequently with little dialogue and great economy.  By the end of a scant 85 minute running time, we feel we’ve fully experienced two lives in extraordinary circumstances.

The film opens on a night out with Asia (Alena Yiv), dancing at a nightclub and drinking to excess.  The exchange between mother and daughter the next morning as a hung over Asia prepares for work is perfunctory, Vika needing money for groceries, a failing refrigerator given a well placed kick.  This looks like one of those films we’ve seen before where the child is the parent but looks can be deceiving.

Pribar lets details fill in background naturally, like the comment a boy Vika brings home makes about how ‘Russian’ their apartment looks telling us Asia is an émigré.  Asia may party hard, but we also see she works hard, supplementing her hospital shifts with in home care, helping aide Rose (Mirna Fridman) bathe the elderly Valentina (Nadia Tichonova).

The emotional pitch of the film shifts gears when Asia discovers Vika crying in the tub, her motor skills deteriorating (although not defined in the film, Vika is suffering from muscular dystrophy).  Asia splashes out hard earned money on a resort vacation that doesn’t quite work, but leads to conversation.  The ball is dropped when Asia, out carrying on an affair with a doctor from her hospital (Gera Sandler), fails to answer her phone, arriving home to find Vika in the care of Rose, Valentina seated in the living room.  Asia refuses to allow herself another distraction, hiring a young male nurse, Gabi (Tamir Mula), to help out, but well intentioned mismanagement will leave her Vika’s only recourse.

Yiv and Haas really deliver here, the duo creating a sisterly bond that never crosses too far either into parental authority or undisciplined friendship.  We can feel new intimacy between them, personal boundaries dropped to forge uncommon closeness, giggly humor combating life’s everyday battles.  Haas, who frequently recalls a young Natalie Portman, paints a moving portrait of a young woman trying to embrace a life that is beginning to elude her.  Yiv maintains an exceptionally tricky balance, supporting her daughter while slowly forfeiting her own pleasures yet never losing that lusty woman we were introduced to.  Cinematographer Daniella Nowitz uses blues and greens and composition for character definition and psychological emphasis.  In one particularly notable scene, Pribar transitions from Asia comforting Vika as she struggles to breathe to a shot following her down a hospital corridor, the memory she was sharing about fresh baked pita continuing into the tracking shot like that very scent.      “Asia” is an uncommonly good paean to a mother’s love.