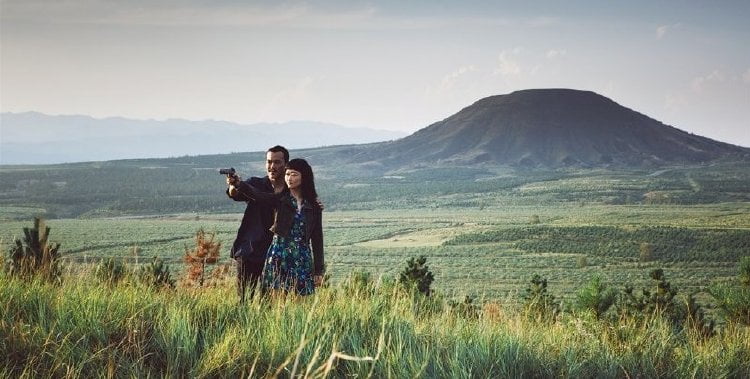 Qiao (Tao Zhao) is the tough, resourceful moll of gang boss Bin (Fan Liao). Her loyalty is called into test when she protects her man from a rival gang – and gets five years in prison. The thing that kept her going while doing her time was reuniting with Bin in “Ash is Purest White.”

In 2001, Qiao (Tao Zhao, “Still Life”) makes her way through her jianghu lover Bin’s (Fan Liao, “Black Coal, Thin Ice”)gambling parlor with coquettish authority, seemingly content with her life in depressed Shanxi. But when a gun drops from Bin’s waistband on a disco dance floor, Qiao worries it will be the end of them, expressing a desire to leave Datang and settle down in Xinjiang. Instead, Bin teaches Qiao how to shoot, a dormant volcano in the distance causing her to note that because it burns so fiercely, “Ash Is the Purest White.” Writer/director Jia Zhang-ke (“The World,” “Mountains May Depart”) returns to themes of the tumultuous changes in his homeland, this time placing them within a love story set against the background of China’s underworld. The film is far ranging in both time and place, Qiao travelling thousands of miles over the course of almost two decades as Zhang-ke builds a haunting mood of aching nostalgia. Initial impressions of life in 2001 Shanxi begin to falter as soon as Qiao goes to her humble home. Along the way she finds her father blasting a capitalist protest against the local mining companies over a loudspeaker and stops him. Bin’s boss Eryong is murdered, placing him in a more dangerous position. Smaller cracks appear as we (and more subtly, Qiao) notice Bin’s appreciation of young, pretty women, like the disco dancer Eryong championed who performs at his funeral. Bin is attacked by two thugs with a lead pipe, his leg severely injured. Then Qiao’s life changes in a moment. One night traveling with Bin, the couple’s car is ambushed by a rival gang on motorcycle. When their driver cannot save them, Bin hops out, the odds against him. With his life in the balance, Qiao takes his gun and fires it into the air, scattering his assailants, but receiving a five year prison sentence for the weapon she claims as hers. The woman who emerges five years later is noticeably older. There is no one to greet her, Qiao’s father having died and Bin, who miraculously survived the assault, out four years earlier and now a bigwig at an energy plant in Fengjie, a new woman by his side. Qiao travels to Fengjie, insistent that Bin tell her their relationship is over face to face. Her travel places her in even more desperate straits. Robbed by a fellow travel at Three Gorges Dam (the site of Zhang-ke’s “Still Life,” itself a symbol of a changing China), Qiao crashes a wedding in order to eat, later conning men out of money by randomly telling them she is the sister of a woman they impregnated. Qiao eventually does see Bin, their meeting going about how we would expect. Her desire to settle down in Xinjiang presents itself in the form of a smitten man from Karamay who tries to recruit her into his new UFO tourism business (another echo of “Still Life”), a dreamlike romance on a train. 2018 finds Qiao back home in Datong, wandering through the same gambling parlor, now middle-aged. Zhang-ke dangles one last hope at love, but romance has been disillusioned with harsh realities. Tao Zhao gives a quiet performance that nonetheless builds in power, her appearance reflecting the continual blows of dreams slipping away in a country waiting for no one. “Ash Is Purest White” is a haunting, epic romance. Grade:

Writer-director Jia Zhangke begins this mini epic story about Qiao on a train hurtling across the Chinese landscape. The camera gives a close-up of a chubby baby on board. But, this has nothing to do with Qiao’s story as she struts her stuff for Bin as he does his criminal business. Everything is going great for the couple as they drive through the city. Forced to stop by a rival gang, Bin is beaten senseless but the potential mayhem is stopped when Qaio fire’s Bin’s gun in the air. She is arrested for possessing an illegal firearm and serves her time willingly, knowing Bin will wait for her. She is wrong. What starts out as a gangster tale turns into, in a deftly handled way, a character study of a woman whose dreams are dashed but that does not stop her from getting back her life. Tao Zhao (the wife of the film’s director, Jia Zhangke), keeps your attention and interest from beginning to end in this three act play that spans years. “Ash Is Purest White” is a compelling study of a woman who proves her inner strength through adversity with her strength and integrity of character. The story has a nicely defined arch as we watch Qiao go through drastic life changes at the same time as her country goes through its own changes – the Three Gorges Dam project is representative of China and the future and a prominent backdrop.