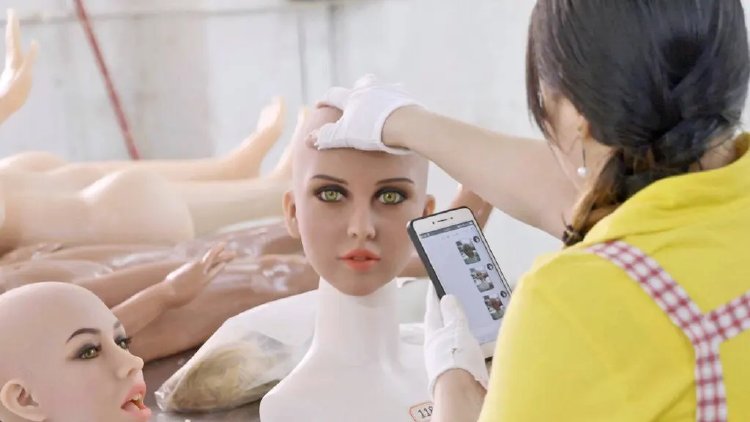 Over a hundred years ago, in 1912 China, documentarian Jessica Kingdon’s grandfather wrote a poem about the pitfalls of technological progress.  In her new film, Kingdon illustrates the rising power of Chinese Capitalism across economic classes.  She’s titled it after her grandfather’s poem, “Ascension.”

This largely dialogue-free film uses a series of visual patterns comprised of people and things edited to its percussive score, unspooling like Charlie Chaplin’s “Modern Times” through the lens of “Koyaanisqatsi” with a touch of Jacques Tati.  With a sea of people being recruited into manufacturing jobs who are then pictured performing mind numbing assembly line labor, followed by those who broker the goods and then those who enjoy them, “Ascension” is also like a live action version of Erick Oh’s sensational, 2021 Oscar nominated animated short ‘Opera.’

It’s fascinating to see how big businesses pitch jobs assembling phones, packaging vape pens or making car accessories to workers by offering free transportation to live in dorms with free cafeteria meals providing one has no criminal record or visible tattoos, all for the equivalent of about $2.50 an hour.  The repetitiveness of the work becomes hypnotic (watch those embroidery machines adorning tees with ‘Keep America Great’!), but Kingdon breaks up her patterns occasionally focusing on such surreal sights as women assembling custom sex dolls that jiggle on their work spaces.

There are classes on influencer branding, ‘Chinese ladies’ instructed on how to glue down stray hairs and how to smile by showing eight specific teeth.  We come away noting how everyone is a cog in China’s machine with the country’s strict standards of uniformity before Kingdon switches gears again, the upper classes swirling in surreal patterns at a water park or men sitting in rows plugged into video games, their food and drink delivered to their stations.

“Ascension” is a visual delight with troubling themes (and a great score by “All Light, Everywhere’s” Dan Deacon).  We are told human rights don’t matter when the poor are struggling to survive.   Chinese Capitalism is on the rise along with a serious wealth gap.

The General Secretary of China, Xi Jinping, began promoting the “Chinese Dream” for “the great rejuvenation of the Chinese Nation” a few years ago. Director-producer Jessica Kingdon examines that dream and how it impacts the inhabitants, from bottom to top, of the People’s Republic in “Ascension.”

I think this is the first documentary about modern China that covers the whole spectrum of life in country, from those toiling in the country’s mines, to the factory workers doing mind-numbing repetitive tasks, to the budding middle class that hopes to be poised on the brink of success to, finally, the rarified upper class.

Director Kingdon must have watched the Frederick Wiseman catalog of documentary films as an influence in creating “Ascension.” There is a quite similar cinema verite style in the execution of this in-depth look at the people who populate the new Chinese capitalism. Do not equate “capitalism” to political system as it is on the upswing in both democracies and totalitarian dictatorships to focus greed.

This matter-of-fact document of capitalism in 21st Century Communist China shows a wealth gap in their society that is much like the wealth gap in our own country. For the Chinese in charge, the status quo is keeping the masses pacified while catering to the burgeoning upper class and giving them the chance at hedonistic indulgence reigns supreme in what was once a “classless” society.

The look into the mind-numbing tabor that is the way of life for most Chinese working class does have its mirthful moments. At one point, we are brought into the company that builds sex dolls and it is both funny and creepily disturbing – you will know what I mean when you see it.

The next class level, the ambitious middle class, is the training ground for those who seek enormous wealth, even if they are unlikely in succeed in getting it. Then, we get to see the wealthy in China and, unexpectedly, they are very much like the privileged rich in the US. Success rides on exploitation of those who dream of having the Chinese Dream and accept, gratefully, the discarded scrap of the few.

I think the main thing I got from this insightful documentary is that capitalism in democratic, communist or dictatorship systems is based on greed and greed is not, as Gordon Gecko said in “Wall Street” “good.” It is just greed. To quote the first line in Blood, Sweat and Tears’ song “God Bless the Child”: “Thems that got shall get, thems that not shall lose.” It has been going on like that for 4000 years.