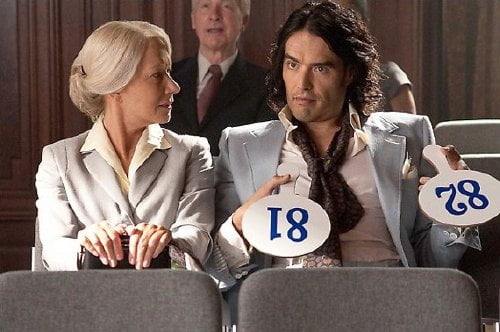 New York City billionaire Vivienne Bach (Geraldine James, "Made in Dagenham") despairs when investors shun her charitable fund because they fear for its future. That's because her son is a legendary drunk, a party animal so irresponsible he's still cared for by his nanny, Hobson (Helen Mirren, "The Queen," "RED"). So Vivienne issues an ultimatum - he must marry high strung horsewoman and respected businesswoman Susan Johnson (Jennifer Garner, "13 Going on 30") to ensure stability - or be cut off from the family fortune. It is at this crossroads that love comes unexpectedly to "Arthur."

A lot of people consider the 1981 original, which starred Dudley Moore and won Oscars for Best Song and Supporting Actor Sir John Gielgud, a classic, but I remember it more as a solid commercial comedy. In that vein, this turns out to be a perfect remake vehicle for British comic Russell Brand ("Get Him to the Greek"). In his most winning cinematic performance to date, Brand gives us a functional alcoholic with a rascally wit and irreverent social more instead of Moore's slurry, stumbling drunk. Brand and his 'Mary Poppins of Menopause,' Helen Mirren, make screenwriter Peter Baynham's ("Borat," "Brüno") dialogue snap and sparkle, aided by the perfect comic dialogue beats of Judd Apatow's perennial editor Brent White. If only mumblecore indie actress (Greta Gerwig, "Baghead," "Greenberg"), in her first time out in the big leagues, showed a bit more of the quirk that branded her to begin with in her role as Naomi Quinn, Arthur's love interest. Still, Brand is funnier than Moore was and Baynham's modernization of the source material is smart, making this one of those rare worthwhile remakes. We're introduced to Arthur dressed as Batman while his Robin, chauffeur Bitterman (Luis Guzmán, more visual joke than character), questions the outfit's suitability for Vivienne's charity gala. As it turns out, the duo only appear as a news flash on her guests' cell phones, having been arrested for uprooting the Wall Street bull with their Batmobile. Arthur, who is always generous with family funds, bails the entire jail out and sets off for more fun with no worries for its aftermath as Hobson disbands his hangers on as part of her morning ritual. While she looks down upon his lifestyle, there is an almost mother-son bond between them. Hobson even enjoys Arthur's sense of the absurd, like his daily game of finding 'celebrity' doubles on the streets below his Pierre Hotel penthouse from his bathtub with oversized binoculars. Initially Hobson doesn't object to her ultimate employer's ultimatum, but Arthur, who dated Susan previously, objects strenuously - until he learns he'll be cut off if he doesn't tie the knot. And Susan's wealthy contractor dad Burt (Nick Nolte) threatens to cut others things off with a table saw if Arthur refuses to make his little girl happy. (What's in it for Susan? The respectability of a society name and a huge charitable foundation to run.) Then Arthur runs into unusual tour guide Naomi, showing a group the ceiling of Grand Central Station from prone positions on the floor. When the cops try to bust the unlicensed guide, Arthur steps in and the two spin a fantasy alibi on the spot. Hobson isn't overly fond of Brooklynite Naomi at first either, believing her to be yet another gold digger, but Naomi doesn't back down from the icy reception. Arthur tries both AA and working for a living, but can't make a go at either, losing Naomi when he admits his engagement in defeat. Then he must face yet another loss, one that forces him to finally grow up and accept the responsibility for someone else. Television director Jason Winer ('Modern Family') makes his leap to the big screen with a few bumps but some strong ingredients to back him up. Baynham's script not only makes the necessary technological and economical updates, but changes to the Arthur/Hobson dynamic with Hobson's change of sex and position refresh the comedic rhythms while keeping "Arthur's" bones intact. Brand's lines are seemingly ad libbed from his inner whirling dervish. Even his rhyming riffs in song during Susan's wedding shower (a tip of the tophat to Moore's song and piano man) sound off the cuff and his chemistry with Mirren is a dream. Jennifer Garner, one of America's sweethearts, also has a knack for pulling out edgy blackness, (see "The Invention of Lying.") Here she's straight out villain, very funny with an eagle eyed ambition that dismisses her competition as not worth bothering about. Greta Gerwig, who carved out an indie persona with lovably ditzy performances, ironically plays it too straight here, her wardrobe providing more character than she does. Although she grows into the role as the film progresses, her influence on Arthur feels overblown. The production features such New York landmarks as Central Park, Le Cirque restaurant and Dylan's Candy Bar and incorporates the Frog and Toad children's book along with Baynham's delightful inventions for Naomi's 'Madhattan Tales.' It's a child's eye view of the city, with the 1981 Oscar winning "Arthur's Theme" worked into Theodore Shapiro's ("Tropic Thunder") score for the scene where Arthur procures Grand Central for a romantic dinner of personalized Pez and acrobats. Critical response seems at the ready to throw tomatoes at this remake, but how can one not laugh, when, confronted with getting bored too easily with his toys, including a giraffe, Brand indignantly lays the blame on the animal because 'it ate its monocle!'? This "Arthur" is both as flawed and as good as the first one.