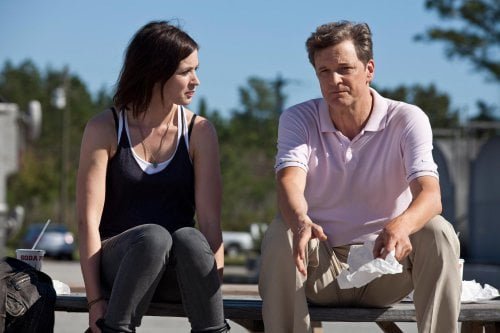 Wallace Avery (Colin Firth, "The King's Speech") tells his girlfriend Mina (Anne Heche, "Cedar Rapids," "Rampart") and his estranged son Kevin (Lucas Hedges, "Moonrise Kingdom") that he's going camping on Talbot Island for the weekend. He then picks up a new 380SL, tows it to the beach, leaves his old car and identification and sets off for a new life as "Arthur Newman."

The most interesting thing about this very low key road trip film is how completely Colin Firth has altered his voice to play this character. If you closed your eyes, you'd be hard pressed to guess who you were listening to. But Dante Ariola's feature directorial debut (from a script Becky Johnston, "Seven Years in Tibet") is such a small film, it almost evaporates as you're watching it. On his first night in a motel, Arthur witnesses the arrest of a drunk and disheveled young woman. Later, he finds Mike (Emily Blunt, "Looper") still disoriented on a lounge chair by the pool and gathers her up and takes her to the hospital where her stomach is pumped of two bottles of a morphine-based cough syrup. She asks him to stay with her. These are two people who are running away, both using someone else's identity. Neither is very open with the other, but when Mike spies a senior couple getting married, she convinces Arthur to follow them, then breaks into their house (she was a locksmith in a former life) when they depart on their honeymoon and seduces Arthur in a role playing game. This continues throughout their trip, until they reach Terre Haute, where Arthur has been promised a position as a golf pro. But he's shut down by Fred Willoughby (David Andrews, TV's 'Justified'), who's looked into his past and found none. Meanwhile, Mina and Kevin take up an odd sort of housekeeping in Wallace's abandoned apartment. Mike is really Charlotte, the twin sister of Michaela, a paranoid schizophrenic she's left in a hospital. Arthur is a top notch amateur golfer who choked trying to make it as a pro, losing his family in the bargain. It takes quite a while to find this out. Then each owns up to the responsibilities they left behind. End of movie. "Arthur Newman" is mostly a meaningless ramble. The big change of heart is based on learning the identity of a dying man Arthur and Mike tried to assist at the beginning of their adventure (Holden Hansen, "42," making more of an impression in a tiny, dialogue-free role than the leads). Johnston's 20 year-old screenplay is both obvious (Arthur literally chokes while Ariola cuts to a flashback of him choking on the course) and too opaque. Mina's story trails off into the ether, despite her protestation of love for Wallace to his son. When Firth first falls into his tattered seductress's game, he changes so violently into the arduous lover, it feels false, an acting exercise, which is all this movie really adds up to. Unfortunately, it's not a very interesting one, despite the talent on hand.

Walter Avery (Colin Firth) is sick of his life. His marriage went bust, his 12-year old son, Kevin (Lucas Hedges) hates him and he failed to achieve his career goals. He makes the fateful decision, one day, to break the ties to his old life and make a brand new one as “Arthur Newman.” First time feature film director Dante Ariola works with a screenplay by Becky Johnson (“The Prince of Tides”), who has not had a script in play for nearly 16 years. Her return to the typewriter is little more than a rehash of other changing identity flicks, but with a difference. “Arthur Newman” has not one but two people trying to lose their past to become someone new and different. Mike (Emily Blunt) is a beautiful, fragile young woman who Arthur helps out with an act of kindness. She, too, is trying to change her identity and make a new life. As expected, Arthur and Mike form an immediate bond as they travel together from Florida to Terre Haute, Indiana. Arthur was promised a job as the golf pro at a swanky country club in that mid-west city and Mike decides to tag along for a while. This begins the road trip portion of our film as the two, along the way, invade vacant homes, eat the owners’ food, drink their booze and, when available, smoke their pot. They both get a thrill when the invade an empty home and an even greater thrill when they are almost caught. It is a case of adults acting like giddy teenagers. Essentially, “Arthur Newman” is about two very troubled people trying to escape their stifling lives and start fresh. Direction, though, is stilted and the story is uninspired and frequently clichéd. Academy-award winner Colin Firth seems to be doing someone a favor by agreeing to play Walter Avery/Arthur Newman. The character is flat and Firth does not breathe any life into Walter/Arthur. The always likable Emily Blunt does a serviceable job as Mike/Charlotte (her other identity) but she, too, is strapped by the stilted dialog and direction.