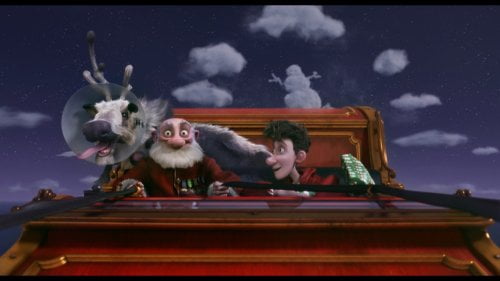 After Santa (voice of Jim Broadbent) completes his Christmas Eve deliveries with the mission control help of his elder son Steve (voice of Hugh Laurie, TV's 'House M.D.'), it's discovered that one gift was misplaced. Santa and Steve are lulled by their off the charts success percentage, but Santa's klutzy young son won't hear of disappointing a child. With the help of his Grandsanta (voice of Bill Nighy, "Hot Fuzz," "Rango"), Grandsanta's outmoded sleigh and a wrapping elf named Bryony (voice of Ashley Jensen, TV's 'Ugly Betty,' "Gnomeo & Juliet"), that gift has quite an adventure on its way to being delivered by "Arthur Christmas."

Aardman's known for its claymation stars Wallace & Gromit, but dipped its toe into computer imagery with "Flushed Away." Their second CGI effort is much better, a creation that is at once wholly British and universal. Cowriter (with Peter Baynham, "Borat," 2010's "Arthur")/director Sarah Smith (British TV's 'The Armando Iannucci Shows') has also introduced 3D to Aardman and she uses the format well, one of the few 3D films worth splurging for the ticket upcharge. In this world, the Santa legacy is not unlike British royalty, a hereditary post with an elder son chomping at the bit to ascend the throne (we see some of the ancestors in a series of portraits, many involving the military dress of the era, while Mrs. Santa (voice of Imelda Staunton) resembles the late Queen Mum). The present Santa is beloved, but really only a befuddled figurehead. Steve, a camouflage jump-suited V of a man with a short, Christmas tree shaped beard and a Bluetooth, is all efficiency, directing units of elves rapelling from Santa's giant space ship hovering over each location, from his North Pole Mission Control. Arthur (voice of James McAvoy, "Wanted," "Gnomeo & Juliet"), clad in a holiday sweater, isn't welcome there, banished to letter writing where he becomes intimately involved in each child's dreams. A missive from Gwen Hines in Cornwall asks many pertinent questions about just how Santa does it before asking for a glittery pink bike. The movie then proceeds to answer her. In a hilarious sequence, control is thrown into red alert over a 'waker' with Santa and his elves still present in his bedroom (it's more than a bit reminiscent of "Monsters, Inc," but also damn clever on its own), and it is during this heightened drama that Gwen's bike falls unnoticed out of the production line. Arthur's 'help' from Grandsanta is motivated by something other than Christmas spirit, but he's off on the adventure of a lifetime and their old-fashioned transport is the antithesis of Steve's stealth missions, setting off a worldwide UFO alert. It also doesn't help that Gwen's home town has a double in Mexico. The film's production design is an odd mix of the modern and traditional, sometimes leaning modern when it shouldn't (Arthur's sweater, for example, is too lime a green), but that is also the nature of its story. The visuals are often funny - the bulbous 'family nose' noted as generations sit to dine at Mrs. Santa's table, Grandsanta's aged reindeer in a dog cone, Bryony's piercings - and often beautiful - the animals of the Serengeti, the homage to beloved British hand-drawn animation 'The Snowman.' The writing is almost Pixar level with all its clever gags, like Grandsanta's faulty recall of his reindeer names. If only the filmmakers had edited themselves a wee bit, as Arthur's quest goes on and on and on. They also could have reined in McAvoy, whose enthusiasm occasionally tips the meter. Other vocal performances are terrific, with Jensen sounding just like AbFab's Jane Horrocks, who also appears as a mission control elf analyzing the red alert situation. Other elves are voiced by the likes of Eva Longoria, Michael Palin, Robbie Coltrane, Joan Cusack, Rhys Darby, Andy Serkis and Dominic West with Laura Linney as their computer. "Arthur Christmas" is preceded by a 3D Justin Bieber video in which he appears to be emulating Michael Jackson in epauletted military jacket and gloves singing a Christmas standard. You'll forget it as soon as Smith envelops you in her 3D North Pole world.