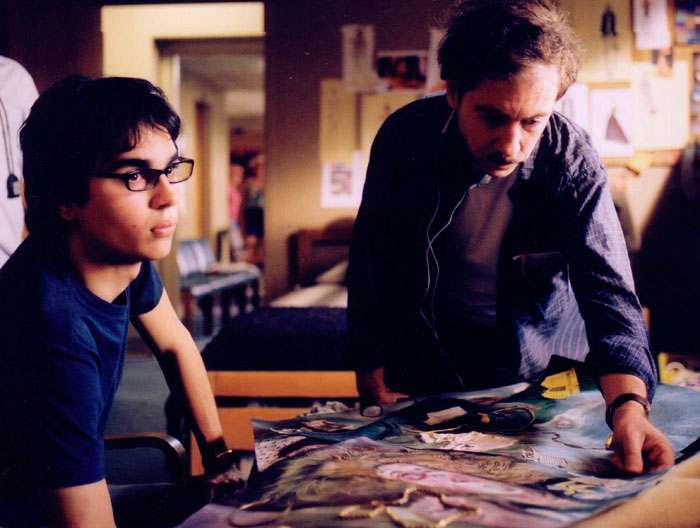 Jerome Platz (Max Minghella) is a talented young artist chomping at the bit to get away from high school, where his talent is woefully under-appreciated, and into art school where he is bound, he knows, to shine. But, the reality of life proves that the best is not necessarily the most popular in “Art School Confidential.”

Jerome Platz (Max Minghella, "Bee Season," "Syriana") believes he can become the next Picasso, but he's bewildered by the b.s. he encounters at a New York City art school. Surrounded by self delusional professors, enthusiastic hacks and outrageously rude alumni, Jerome finds solace in Audrey (Sophia Myles, "Tristan & Isolde"), the girl of his dreams who just happens to be an artist's model. He also finds real art in the home of the alcoholic and abandoned Jimmy (Jim Broadbent, "The Chronicles of Narnia: The Lion, the Witch and the Wardrobe"), but it is art that may be murderabilia being tracked down in "Art School Confidential." The team who brought us "Ghost World," director Terry Zwigoff ("Bad Santa") and writer Daniel Clowes, return for another comic book romp through a world of misfits trying to find their niche in the world, but while "Art School Confidential" begins promisingly enough, its Faustian second half runs out of steam. An absolutely hilarious performance fine-tuned to perfection by producer John Malkovich ("The Hitchhiker's Guide to the Galaxy," "The Libertine") is worth the price of admission alone, though. It doesn't help that the film's hero, Jerome, isn't particularly charismatic. In fact, Platz alienates his fellow students with his honest critiques of their work and while his own drawings certainly show talent, there's nothing about them that suggest the genius he sees in himself. At first, his buddy Bardo (Joel Moore, "Dodgeball: A True Underdog Story"), cannot fathom Jerome when he calls out the class stereotypes (the Kiss Ass, the Beatnik girl, the Mother), but his summation at film's end is as softly pedalled as Jerome's art barbs. It is Bardo who introduces Jerome to Jimmy, an artist willing to share his nihilistic views for a bottle of Slivovitz. Then there is Jonah (Matt Keeslar, HBO's "Live from Baghdad"), the new student who seems a bit too adjusted and whose simplistic pictures enthrall both the class and Professor Sandiford (Malkovich). Worst of all, Jonah himself seems to enthrall Audrey. In trying to win back Audrey and become a big success like Strathmore alumni Marvin Bushmiller (Adam Scott, "The Aviator," "Monster-in-Law"), Jerome passes off Jimmy's work as his own at the same time he has inadvertently disposed of the man the campus calls the Strathmore Strangler. The filmmakers have some inspired fun with the whole concept of art school (their first day arrivals montage is priceless), but their screenplay is too splintered, spiking off in too many directions, and they never fully realize the satire in their serial killer subplot, getting too mired down in police procedurals. Take, for example, Jerome's roommate Vince (Ethan Suplee, TV's "My Name Is Earl"), a film student attired like Kevin Smith making a lousy horror film on the strangler. He's another good example of the delusions of art students everywhere, but when we follow this guy into an editing session it leads nowhere. He's worked back into the plot when his film shoot outs an undercover officer, but the emphasis should be on what makes Jimmy's, and now, of course Jerome's, work suddenly valuable. There's also a whiff of homophobia around a film that declares that 'the vast majority of artists are physiologically deficient in some way,' then serves up laughs with a roommate's coming out (Matthew, played by "Malibu's Most Wanted's" Nick Swardson, is the only surprised by his own announcement), a teacher's gay pass and Jerome's parents' secret celebration when he mentions having a girlfriend. Minghella and Myles never conjure up a relationship worth routing for, but there's fun to be had with supporting players. For a man so intellectually gifted, it is an absolute wonder that Malkovich can appear so effortlessly clueless to his own side-splitting and self-absorbed delusions of grandeur. It's a gem of a performance from one of our most underrated actors. Jack Ong ("Lady Killers") is also a riot as Sandy's opposite, the realistically benumbed Professor Okamura. Adam Scott gives a lesson on how obnoxious celebrity behavior is not only tolerated but almost admired in this fame addled society. Steve Buscemi inhabits Broadway Bob, the cafe owner who launches the careers of Strathmore Institute students by exhibiting their work and Anjelica Huston ("The Life Aquatic with Steve Zissou") makes two brief but important appearances as Jerome's influential art history teacher. Ezra Buzzington ("The Hills Have Eyes") seems to be channeling Christopher Lloyd as an unabashed male model. It should also be mentioned that "Art School Confidential" is pretty flat looking for a film about would-be artists, but maybe that's the point. There is also no attempt to incorporate the 50's crime magazine visuals implied by its title. "Brick" was a superlative example of seamlessly mixing genres, but in "Art School" the glue is showing.

Terry Zwigoff again joins forces with comic artist and storyteller Daniel Clowes, following their critically acclaimed art house hit, “Ghost World,” with a tale of unacknowledged genius in the midst of the intellectual art snobs. Jerome showed exceptional promise in high school but in the now-rarified atmosphere of art school, with its cadre of elitist students, he faces challenges other than his drawings and paintings. At the core of his frustration is his class with art teacher, Professor Sandiford (John Malkovich), whose chances for greatness are long past. The instructor lords over his impressionable students whose “works” are greeted with disdain by young Jerome. But, instead of earning Sandiford’s praise for his considerable talent and dedication, he is overshadowed by hunky student, Jonah (Matt Keeslar), who is lauded by all (except Jerome) for his simplistic work. Things aren’t always a battle for Jerome, though, when he meets Audrey (Sophia Myles), the stunning nude model at the school. She is taken by Jerome’s talent and sincerity but soon develops an interest in Jonah. Desperate, Jerome devises a precarious plan to get both the fame he knows he deserves and the girl he wants. This is a quirky little movie that is more about the life of a burgeoning art talent. And less. Mixed in with the trials and tribulations of Jerome’s career and love life is an ongoing series of murders in the art school’s neighborhood. There is also the alcoholic, failed artist, Jimmy (Jim Broadbent), befriended by Jerome, who has a collection of creepy portraits of murder victims that include specific pieces of apparently incriminatory evidence. This combination makes “Art School Confidential” turn darkly and not quite so coherently. There is a talented cast of supporting characters around Max Minghella that fleshes things out. Besides Malkovich, Broadbent and Myles, there is Angelica Huston as the regal Sophie, the art professor emeritus of the school (little more than a brief cameo); Joel David Moore as Bardo, Jerome’s self-appointed muse who guides his younger ward through the social maze that is art college – and, stealing the show every time he’s on the screen; Ethan Suplee also offers some good comic relief as Jerome’s dorm mate, Vince, a budding filmmaker who is nine parts ambition and one part talent; and, a short-lived appearance by Zwigoff/Clowes favorite, Steve Buscemi. The look of “Art School Confidential” is in keeping with its offbeat story. Best are the varied works of the art school students showing their different views of what is art. Some of it, praised by Professor Sandiford, really brings out the differences between thinking one is an artist and actually being one. The denizens of the art class are a mixed, angst-filled lot whose talent is obviously not the equal of Jerome. Zwigoff and Clowes latest collaboration doesn’t have the cohesive structure and story of “Ghost World,” but its good cast helps it. Jerome’s tale moves from light humor to a dark and sinister vein in an uneven flow, making it hard for me to get my arms around it. Still, I appreciate the intelligence of the script and the style of the film.