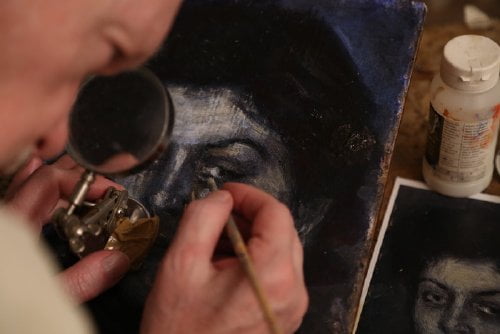 Mark Landis has been called one of the most capable art forgers of our time. But, the man was not in it for the money. Instead, for 30 years he has donated his forgeries to some of the county’s most prestigious institutions, mimicking 15th Century masters, Picasso and even Disney with his “Art and Craft”

Though only 89 minutes run time, this initially fascinating tale of an unknown master art forger, Mark Landis, who duped some 46 or more art institutions around the country with his donated forgeries of classic art, goes on too long. The term “beating a dead horse” came too mind after the 45 minute mark when the filmmakers began repeating themselves to the film’s flat ending. Mark Landis is the most unlikely art forger one could imagine. The slightly built, almost scrawny , Landis, over his 30 year “career,” posed as numerous benefactors, including a Catholic priest, to the curators of some of the country’s best art institutes. He purposely chose his recipients, experts in the field, to proffer his donations and, until 2007, was undetected. That changed when one museum registrar, Matthew Leininger, checked several of Landis’s donations and realized they were forgeries. He began his investigations into the forger’s duping the art world. This is where things start repeating without any real revelation about Landis’s non-criminal acts of forgery. Cut 30 minutes and re-edit and there may be an interesting PBS program here. As a feature length documentary, I found it wanting.