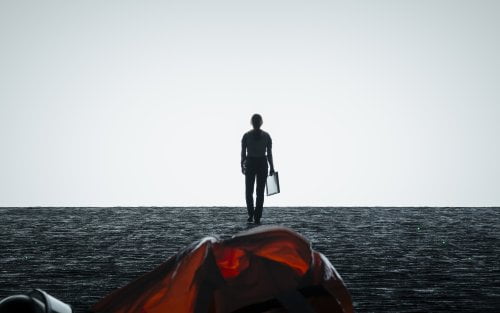 A dozen alien spaceships hover across the globe. Communication with the visitors has yielded little information, so expert linguist Louise Banks (Amy Adams) is called in by Army officer-in-charge Col. Weber (Forest Whitaker) to make a breakthrough and find out the reason for the “Arrival.”

We meet linguistics expert Dr. Louise Banks (Amy Adams) writing to her beloved daughter Hannah (Julia Scarlett Dan at 12, Abigail Pniowsky at 8, Jadyn Malone at 4), mourning the girl who was taken from her too soon. As she conducts her college class, a student asks her to turn on the news where reports are coming in of 1500 foot high ovoid spacecraft hovering over Montana and eleven other spots around the globe. Back at her home, Louise receives a visit from Colonel Weber (Forest Whitaker) asking her to translate the strange sounds made by its inhabitants, but she insists that will be impossible unless she can travel to the site of their "Arrival." This science fiction is a rarity, a cerebral film that will break your heart while expanding your mind. Working with Eric Heisserer's ("Lights Out") smartly constructed adaptation of Ted Chiang's 'Story of Your Life," director Denis Villeneuve ("Prisoners," "Sicario") has made an intimate movie with universal implications. There are elements of "Close Encounters of the Third Kind" in man's attempt to communicate with aliens (Jóhann Jóhannsson's ("Sicario") affecting score makes a subtle nod), "Gravity" in a skyward-looking grieving mother's bond to her child, and many films where global crisis causes conflict among nations, but "Arrival" is unique in its mind altering concept of communication and time travel. On board the military copter sent to fetch her, Julie's introduction to physicist Ian Donnelly (Jeremy Renner) is ironically hindered by her unfamiliarity with the noise reducing headsets which allow its passengers to converse. He's a surprisingly easy going sort, the scientist to her academic. At the military encampment established on the green plain dwarfed by the alien ship, they're run through protocols, then suited up and transported to the ship's entrance. Its antechamber is a long, vertical tunnel of shale-like ridges with so little gravity Ian is amazed to find himself walking upright. The aliens, which look like giant, elephant-skinned, seven fingered disembodied hands, appear through a misty fog behind a glass wall. Julie approaches stating and pointing to the word 'human,' written on her slate. One of the two creatures, whom Ian dubs Abbott and Costello, responds by shooting an inky, vaporous circle from one of its appendages. As Julie and Ian work to understand Abbott and Costello's communications, we can feel them drawing closer. Meanwhile CIA Agent Halpern (Michael Stuhlbarg, "A Serious Man") is keeping a close watch on other country's response to the situation, and when a word is introduced that could mean 'weapon,' tensions escalate. Julie, who previously took her life into her hands by stripping off her protective suit to commune with Abbott and Costello, goes a step further by surreptitiously calling China's General Shang (Tzi Ma, 2002's "The Quiet American"). Villeneuve may jump around the globe, but his film is relatively small in scope, mostly taking place on that Montana plain and Julie's own mind and he's chosen well in Amy Adams, whose inner journey is expressed on her compassionate, curious face (aided by some voice over narration and Villeneuve's depictions of her memory). Renner has never been better as the protective physicist with a calming presence (it is his final declaration that may bring you to tears). Visual effects and Bradford Young's ("Selma") digital cinematography are impressively organic. A scene in the ship's interior has an underwater dreaminess. "Arrival" contemplates death while embracing the vast mysteries of life. It's a heady mix of science and emotion. Grade:

Here is a case where the film has elevated the original short story by Ted Chiang and formed it into a cerebral science fiction film that seeks peace, not war, from our extraterrestrial guests. It reminds me most of the 1951 sci-fi classic, “The Day the Earth Stood Still.” That film ended with the alien visitor, Klaatu (Michael Rennie), warning mankind, as he prepares to leave Earth that, if peace does not ensue, the planet would be obliterated. “Arrival” is far more upbeat with Louise and her colleague, Ian Donnelly (Jeremy Renner), coming face to face with two aliens, dubbed Abbott and Costello, to begin the slow process of understanding the visitors and making them understand us. This seems like it would be tedious, even boring, but, in the hands of director Denis Villeneuve, with a skilled adaptation of the short story by Eric Heisserer, and a fine starring cast make this a superior sci-fi psychodrama that, without any real “action,” tells a compelling story of Earth’s first visit from beyond our solar system. Amy Adams, always likable in whatever role she embraces, is convincing as linguistic investigator Louise. Hers is a riveting detective story as she attempts to unravel the near impossible: figure out how to talk to an alien race with no prior knowledge about them. Watching her and Ian attempting, first, rudimentary communication, then, more in depth as their linguistics grow more complex. Jeremy Renner gives a yeoman performance as Ian but is more of a sidekick to Adams center-focused Louise. Forest Whitaker has the just two-dimensional role of the officer in charge. This detective story is punctuated with news from around the world of the rising resistance against the aliens – because they cannot understand them, particularly China, who threatens to declare war on the new arrivals. This brings a race against time as Louise and Ian must crack the alien language and bring reason to the world. There is also a sub story about Louise losing her beloved daughter, Hannah (played in three stages by Jadyn Malone (age 4), Abigail Pniowsky (age 8) Julia Scarlett Dan (age 12)), and the flashbacks of family life before the girl’s far too early death. The special effects, while quite good and fitting the tone of “Arrival,” are more low-key than one would expect. If this were a Marvel Comics Universe, the concentration would be on the Chinese aggression against the aliens and set battles, sans superheroes, and lots of noisy spectacle. Fortunately, the makers of “Arrival” make this a thought provoking drama cloaked in the guise of science fiction.