Around a Small Mountain 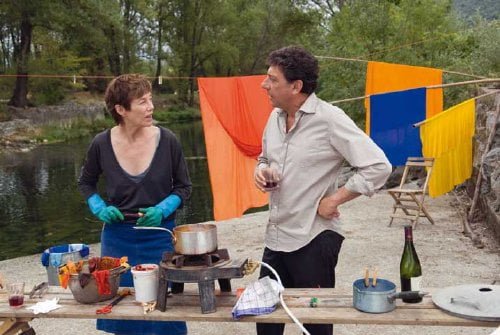 When Kate's (Jane Birkin, "The Beaches of Agnès") car breaks down, she's assisted by Italian tourist Vittorio (Sergio Castellitto, "Mostly Martha," "Don't Move"). Vittorio's interest in her is peaked even more when he discovers she is part of an odd little rural circus but that a past tragedy keeps her from entering the ring. He remains, even working his way into the clown Alexandre's (André Marcon, "The Page Turner") act, while he gently guides Kate "Around a Small Mountain." Cowriter (with his "The Duchess of Langeais" scribes Pascal Bonitzer & Christine Laurent)/director Jacques Rivette indulges his love of theater with this offbeat, low key love story punctuated by acts from aerialists, tumblers and tightrope walkers. Here's a small circus with no animals, only people performing classic - and in the case of the clown not so classic - routines, where there are 'no reserved seats but no crowds.' The love story between Kate and Vittorio is so low key as to be almost nonexistent, but Vittorio's patronage of her circus is delightful. Often one of about three audience members (the audience grows subtly throughout), Vittorio becomes so much more. When he laughs during the clown's act, he's consulted on what they had done correctly. When he advises Alexandre to make more of a show of a dish that's about to be broken (the act involves catching a bullet in one's teeth), though, Alexandre is insulted. The resulting changes, though, become more and more extreme until Vittorio himself is in on the unconventional act. The traditionalists are also worth watching. We see the skill involved as the tightrope performer practices his art in a field. An amazing aerialist is rigged up like a marionette and commands attention as he flexes his way through the air. Castellitto gives a cheeky performance that's a delight to watch and Birkin quietly wins us over as well, even if the 'whip act tragedy' in her past doesn't really engage curiosity. At eighty-four minutes, this is about half the run time the eighty-two year old Rivette usually favors while covering many of his usual themes. It's slight, but worthwhile for the development of Alexandre's act alone.

If you are looking for a circus film about a small traveling show in France that no one visits, then “Around a Small Mountain” is a movie for you. Vittorio (Sergio Castelitto) and Kate (Jane Birkin), the knight in shining armor who saves the damsel in distress when he starts her broken down car, represent two very different worlds colliding. Vittorio is a wealthy businessman of undisclosed means who decides to hang around the meandering road show and makes friend with the performers. Kate is a former aerial artist who has a mysterious past. Vittorio is attracted to the forlorn Kate and her orphaned circus troupe and stays on, offering business advice to owner Alexandre (Andre Marcon), who is also the show’s clown. Alex rejects any offers of help from Vittorio but their friendship grows and a trust is formed. But, this is not what “Around a Small Mountain” is about. It really is about director Jacques Rivette’s vision of his surreal little circus. He plays out the acts of the show – aerial wire work, the infamous whip act, torch juggling and clown Alex’s ongoing plate gag – in statically shot vignettes and to their completion, making “Around…” an artiste’s indulgence. At 82 and with over 30 films to his credit, Rivette has earned the right to indulge himself. “Around a Small Mountain” is about mise en scene rather than characters or story, both of which are there to bring focus the collection of circus acts, from the wire to the clowns, connected by the principal characters as their relationships grow and change. Jacques Rivette makes these individual pieces beautiful stand alone acts but does not tie them together cleanly. The film is a visual treat though not emotionally satisfying.