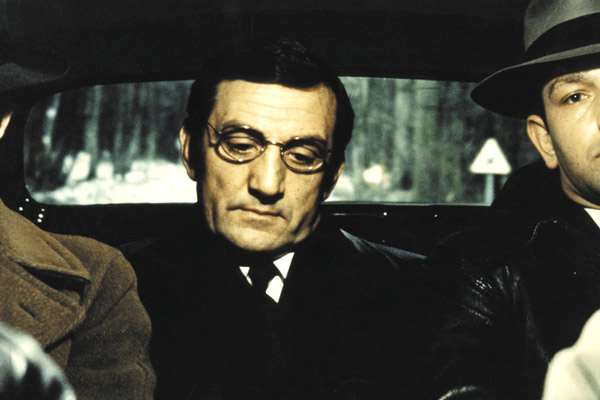 “Unhappy memories! Yet be welcome, for you are my distant youth.” - Georges Courteline

October, 1942. A civil engineer, Philippe Gerbier (Lino Ventura, "The Valachi Papers"), is arrested and thrown into a concentration camp, where he plots to escape with a young communist. But before that can happen, Gerbier is taken to Gestapo Headquarters at the Hotel Majestic in Paris where he makes an even more daring escape into the night and writer/director Jean-Pierre Melville ("Bob le flambeur," "Le Samouraï") reveals him to be a leader of the French Resistance, an "Army of Shadows." At the age of twenty-five, the director known for his French gangster films was himself a member of the French resistance. It took him another twenty-five years to adapt Joseph Kessel's novel (he also wrote "Belle de jour") for the big screen. The film was released in France in 1969 to tepid response and was never theatrically released in the United States. In 2005, cinematographer Pierre Lhomme supervised a restoration of the film and Rialto Pictures presents a real treat, a masterful film which emerges from the shadows of film history just like its shadowy characters. And just like its characters, we're often kept off balance, a tactic engaged by Melville with riveting effect. Gerbier slips into a barbershop and requests a shave to hide himself from pursing Nazis. Not a word is spoken by the barber (Serge Reggiani, "Mauvais sang") who shaves him, but then he is suspiciously insistent in retrieving Gerbier's change. Does he recognize a fugitive or compatriot? A young man in a bomber jacket, Jean François (Jean-Pierre Cassel, "Sade," "The Crimson Rivers"), is recruited by one of Gerbier's men Felix (Paul Crauchet, "Le Cercle rouge") and travels to Marseilles where he delivers radios to Mathilde (Simone Signoret, "Les Diaboliques," "Room at the Top"). He visits his beloved older brother Luc (Paul Meurisse, "Les Diaboliques"), an intellectual and gourmand whom Jean François views as soft and cautious, a man he may not be as close to as the fiercely courageous woman he has just met, a new comrade in arms. Later, on board a submarine, the introduction of Gerbier's boss proves to be one of the greatest movie twists of all time. The cast is fantastic, from the enormously empathetic Lino Ventura in the lead role to the sturdily sexy Signoret. Signoret's Mathilde is a woman so capable she can pluck a friend right out from under a firing squad, but one whose love of family, a family unaware of her activities, proves her undoing. Claude Mann is Le Masque, the guy who asks for a tough job yet crumples at the thought of having to kill a resistance betrayer (a role made ever so human by Alain Libolt) with his bare hands. Christian Barbier is the bull-headedly loyal as Le Bison and Jean-Pierre Cassel is just terrific as the most unlikely and ironically heroic of Gerbier's men. Paul Meurisse is never better than when using psychology on Guillaume, the Bison, to get him to do his bidding. Melville's film really underscores the enormous courage of the everyday people who risked everything for their far flung and sparsely populated 'army' of resistance fighters. The film has few missteps (one, in which Gerbier happens into a British soldiers dance in London and glances round as the camera zooms in and out is so steeped in 60's sensibility it's jarring) and a myriad of the odd little observations which make a story come alive - the small wooden room in the middle of Luc's library used to conserve heat, the crashing wintery waves on the Marseilles coastline, the elaborately boxed new suit in a homey yet well appointed London hotel room. A plane crossing the English Channel may not be the most convincing effect from the exterior, but its interior scenes, where Gerbier prepares to jump for the first time, are utterly so (and may introduce some to the British method of parachuting through the plane's underbelly). "Army of Shadows" is enthralling, its characters distinct and each of their stories moving. Melville's impressionistic look at the Resistance is without a doubt the best war film I never knew existed.

With the invasion of France by the Nazis, civil engineer Philippe Gerbier (Lino Ventura) suddenly finds himself a key member of the Resistance. He is turned over to the Germans by a traitor in the movement and sent to a concentration camp. Another inmate helps him escape the prison and Gerbier joins his network in Marseilles where he sets about to uncover the turncoat and execute him in “Army of Shadows.” Iconic French director Jean-Pierre Melville made “Army of Shadows” back in 1969 but it has taken over 35 years for the film to gain a release here in the US. The only reason I can see for taking so long to get here is that this spy thriller has, when compared to American films of the time, few thrills. But, the solid psychological tale about the machinations of the French Resistance overshadows this lack of conventional action. This is a subtle film, made by players who took part in the anti-Nazi movement during World War Two, which chronicles the violent activities of the Resistance as they fight the Germans while waiting for the hoped for Allied invasion of France. Lino Ventura personifies the movement as a man yanked from his normal, prosperous life by the German blitzkrieg and forced to do things that no man would even consider doing during times of peace. Gerbier commands his dedicated group of freedom fighters following his daring escape from the hands of the Nazis. He joins his Resistance network as they hunt down the traitor and fight the Germans by any means possible. As I said, there are few conventional thrills” to be had here as we follow the fighters through there fear-plagued days as they routinely face the possibility of arrest and imminent execution day after day after day. All the while, they await the word of the Allied invasion when they can really strike back against their oppressors. Meanwhile, preserving the Resistance movement (and, hopefully, themselves) is foremost in the mind of each underground warrior. Joining Ventura is a seasoned cast of veteran French actors making up his cadre of fighters, including Paul Meurisse, jean-Pierre Cassel, Paul Crauchet, Claude Mann and Christian Brabier. The only femme member of this microcosm of the Resistance, Mathilde, is ably played by the great Simone Signoret as a master of disguise capable of both giving and taking orders, no matter how onerous the task. The screen belongs to her during her all to brief moments. Melville adapted Joseph Kessel’s 1943 novel (both men were Resistance fighters during the war) and brought it to the European screens in ’69, but not to America. The film’s cinematographer, Pierre Lhomme, who expertly captures the perilous day-to-day lives of the movement’s members, spearheaded the crisp restoration of this wartime classic, finally allowing us Americans the chance to see Melville’s truly timeless film. The look and feel of “Army of Shadows” belies its age. Hopefully, this re-release will spawn new interest and permit the real film buff the chance to see what has been hidden from us for over 35 years.