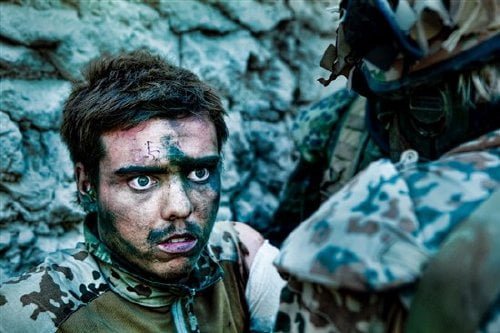 The International Security Assistance Force (ISAF) has engaged in the War on Terrorism since first deployed in 2001 in Afghanistan. Denmark is one of the many countries contributing troops to the mission and documentary filmmaker Janus Metz Pedersen follows one such unit for their six-month deployment at forward firebase “Armadillo.”

"Armadillo" has a lot in common with "Restrepo," but I actually prefer the Danish film. For one thing, it is a mostly new twist to consider the Allies who support the U.S. effort - if it is heartrenching to American families to send their youth to war in Iraq and Afghanistan, imagine how it must feel for the Danes. The filmmakers put themselves into much the same line of fire as Sebastian Junger and the late Tim Hetherington, but their camerawork seems more controlled. The soldiers psychologies are probed (one, discussing how often body parts are seen close to the camp explains how it is 'normal to laugh' in such circumstances). We see negotiations with the locals and, just like "Restrepo," the drama over the inadvertent killing of a cow, but the approaches are different. "Armadillo" also shows us what these soldiers deal with in the aftermath - on returning home there are recriminations from their media. The two documentaries would make a great double bill.

There are many documentaries, since 9/11, on the conflicts against terrorism in Afghanistan, such as “Restrepo” and “The Tillman Story.” Director Pedersen sets the bar high with a film that is daringly crafted with the film crew facing the same fears and dangers as the men whose lives they are chronicling. Wisely, the filmmakers stay behind the camera and let the action unfold as the Danish troops battle Taliban insurgents and try to clear their assigned area of the terrorists. Rather than reminding me of the other documentaries on the Afghan and Iraq conflicts, I felt that “Armadillo” harkens more toward fiction films like “The Hurt Locker” and the opening sequence of “Saving Private Ryan.” The surreal, up-close-and-personal Danish film delivers the same verisimilitude as those films but, here, it is real, not staged. When a soldier, Taliban fighter or innocent civilian is killed, it is genuine and gut-wrenching. Pedersen and company uses the camera lens to be your eye on the battlefield and the result is startling in the sudden abruptness of battle and the noise and confusion of war. “Armadillo” is a densely packed tome that pulls no punches as we live, in danger and dodging bullets, with the Danish troopers of the ISAF. The day-to-day life of these men is divided between long lulls of boredom and tedium – cleaning equipment, talking to family at home and living under rigorous conditions – and the brief, but scary as hell, moments of bringing the fight to the Taliban. One aspect of “Armadillo” that Pedersen and company bring out is the relationship between the Danish soldiers and the local civilians. While the locals are amiable enough to the Danes, they refuse to cooperate in helping them track down the Taliban. If they do, they say, they will be open to retaliation and retribution by the rebel fighters, This refusal isolates the troops and their six-month deployment is an unforgiving one. Techs are remarkable with cinematographer Lars Skree rivaling Hollywood in his expert lensing of the lives of his subjects. The camera crew, though invisible to the viewer, put their lives on the line to capture the dangerous environ where the separation between life and death is just a heartbeat, Snipers, IEDs and pitched battles with the Taliban threaten the Danish soldiers and local civilians with death at any moment. “Armadillo” is a harsh, honest document about men at war – any war.