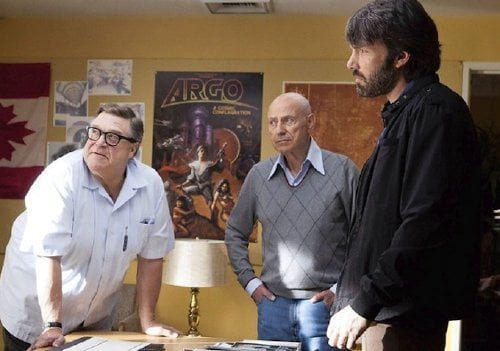 On 4 November 1979, the United States and the world entered a new and violent era when Islamic students and militants stormed and seized the US embassy and 66 hostages in Tehran. The crisis would last for 444 days. Little known, though, is the story of the six American diplomats who escaped the hostage scene and were protected by Canadian ambassador Ken Taylor (Victor Garber) until the CIA, in the guise of agent Tony Mendez (Ben Affleck), can exfiltrate them all in “Argo.”

Truth is stranger than fiction and “Argo” is a case in point. Director-producer-star Ben Affleck takes Joshuah Bearman’s article Escape from Tehran and, with a script by Chris Terrio, does an honest, if Hollywood, job in bringing this harrowing story to life. The helmer takes the usual liberties with the events but this is only to further fuel the exciting true story. Set on the day of the US embassy was invaded, “Argo” is from the perspective of those lucky Americans who avoided the plight of the 52 hostages (13 women and African-America personnel and one ill white diplomat were released by their captors). Actually, 12 originally escaped but six took the wrong way out and were captured and returned to the embassy with the rest of the hostages. The fortuitous decision by the six survivors (Joe and Kathleen Stafford, Mark Lijek and Cora Amburn-Lijek, Robert Anders and Lee Schatz) to go a different route took them to the Canadian ambassador and tentative safety. The story really takes off, though, when CIA exfiltration expert Mendez is called in to save the hostages. The spooks come up with all kinds of possible rescue scenarios and settle upon one of the most far fetched: form a fake movie production fronted by makeup man John Chambers (John Goodman) and producer Lester Siegel (Alan Arkin), get the Canadian government to provide fake passports and spirit the six Americans out as members of a film company scouting locations for the faux film “Argo.” You cannot imagine this stuff and Affleck, with embellishments and invented dangers (as if things were not dangerous enough as it was), does a solid job in his follow-up following the great success of “The Town.” All aspects of the production – from direction, acting, art direction, costume, writing to period detail and photography – are first rate and “Argo” shows the continuing evolution of a filmmaker in Ben Affleck. He and the rest of the large ensemble cast become their characters. The serious subject matter, with its tensions and fears, gets some welcome comic relief from John Goodman and Alan Arkin as the two veteran filmmakers who get a kick out of producing their CIA “film.” The rest give appropriate gravitas to their roles and characters. This rescue-adventure tale is a good bookend for Kathryn Bigelow’s upcoming “Zero Dark Thirty” about the hunt for Osama Bin Laden. “Argo” is a lesser known story but, still, exciting and gripping all the way through.