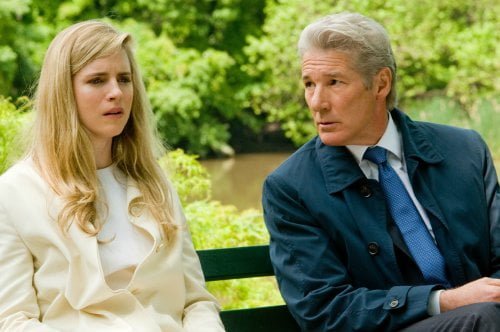 Robert Miller (Richard Gere) is in trouble, big trouble, if a deal worth hundreds of millions of dollars falls through. He juggles these financial dealings and his marriage to Ellen (Susan Sarandon) as he carries on a torrid affair with Julie Cote (Laetitia Casta), a saucy younger French woman. He thinks he is in total control of both professional and private lives but his downfall will not be because of his “Arbitrage.”

On his sixtieth birthday, Robert Miller (Richard Gere) would seem to be on top of the world. He has a loving, beautiful wife Ellen (Susan Sarandon), two adult children one of whom, Brooke (Brit Marling, "Another Earth"), is the CFO of his hedge-fund firm, a Manhattan townhouse and the Teflon ease of the very wealthy. But Miller has secrets - his art dealer mistress Julie Cote (Laetitia Casta, "Gainsbourg: A Heroic Life") is one and his cover up of an accident involving her might expose the second - that the pending sale of his company is resting on an undisclosed $400 million dollar loss gambled in "Arbitrage." Following in the footsteps of older brothers Andrew and Eugene, twenty-five year-old Nicholas Jarecki ("The Outsider") makes his fiction feature writing/directing debut with a subject he knows well having been born to Manhattan commodities traders (brother Andrew looked at true life crime among the NYC elite in 2010's "All Good Things"). Jarecki's tale of a fall from grace, with its likable protagonist wading into financial and criminal quagmires, is like this year's "Margin Call" focused on a Tom Wolfe Master of the Universe, and Gere's terrific in the role. We meet Miller making a speech to his family in a richly paneled dining room and he sounds just a bit too formal, as if he's handing down a sermon from the mount. There's obvious affection there too, if mixed with cheerful resignation from Ellen when he announces a need to revisit the office. At Julie's, a homemade cake contrasts with the expensive professional confectionery he just left, just as his mistress's excessive neediness places her far apart from his warm, sexy, independent wife. Sarandon's so good, Julie never jibes, a mysterious compulsion in Miller which suggests a need for danger or a belief in being above it. Miller is constantly juggling the two hidden pieces of his life - putting off the demanding Julie in order to proceed with a deal that is constantly being stalled by buyer Mayfield's minions. Adding to the stress, Brooke's been combing the books and has found the hole and his explanations are getting flimsier. A late night meeting at the Four Seasons fails to produced the promised man, putting Miller on the defensive with Julie. He suggests a weekend away, but exhaustion causes him to crash her Mercedes en route. He leaves the scene - and a corpse - and calls in a favor from a prior charity case, Jimmy Grant (Nate Parker, "The Secret Life Of Bees," "The Great Debaters"), a young black man with prospects. And morals. Just like his daughter. Jarecki's done a nice job pulling interwoven strings around his protagonist's neck and his wide canvas sports a terrific ensemble. Gere only lets us see him sweat when he's alone and with Jimmy, a case of entitled largesse (Miller made it possible to get the kid on his feet and out of the ghetto, only to put him in a spot that could endanger his future.) Parker's really good here, a decent kid trying to do right but chafing against being compromised. If there's a weakness in Jarecki's plotting, it's with Miller's women - Julie's neediness is too convenient for the plot and Ellen's observational pose pinpoints her as one to watch. But there are so many other riches, like Tim Roth's ("Reservoir Dogs") Det. Michael Bryer, humorously modeled on Columbo, and the surprise cameo when Mayfield finally graces the screen. There's a wealth of character actors on hand to lend authenticity - Josh Pais ("Please Give"), Bruce Altman ("It's Complicated"), Chris Eigeman ("Metropolitan"), Stuart Margolin ("The Hoax"). Marling's right as the uncorrupted heir to the throne and Curtiss Cook ("Shutter Island") is solid as Detective Mills, the man who helps lawyer Syd (Margolin) uncover some corruption on his own side. Having grown up among the people he's portraying, Jarecki got Manhattan authenticity using real locations like The Four Seasons, The Plaza and the GM Building, plus has the distinction of being the first to shoot in 100 Center Street's Grand Jury Room and on the Triborough Bridge. This is a New York story, picture of the American Dream as compromised by Wall Street greed and although Miller avoids public disgrace, he's given an insider piece of opprobrium.

A film that puts one-percenters in a bad light is in keeping with the mood of the American citizenry toward the very wealthy that rule the finances of the masses. But, filmmaker Nicolas Jarecki seems to like the luxury life of the rich as he takes this hedge fund drama and turns it into a story of vehicular mayhem and cover-up. Richard Gere is perfect as the suave, filthy rich Miller who thinks he is above the laws of man. “Arbitrage” does not telegraph its intricate story and it works on many levels. Foremost is Richard Gere who gives one of his best performances and may, just may, earn him his first Oscar nomination. The rest of the cast does a fine job, too, with Susan Sarandon giving a layered performance as Ellen, a wife and mother who is far savvier than she leads us to believe. Brit Marling, as Robert’s daughter Brooke, is the moral voice of reason that he does not listen to, even as she discovers his illicit fiscal wrangling. Nate Parker plays Jimmy, the son of a man that Miller once helped out, and is called upon to return the favor in one of the many twists and turns of the well-crafted tale. It is a notable performance from the young actor. Tim Roth is amusingly Colombo-esque as a detective who smells a rat in Miller and picks away at the tycoon’s shady story. The fine cast, solid story, deft directing and skilled production make “Arbitrage” a good choice for a movie night out. It plays to more mature audiences and not the kids. (There is enough out there for them anyway.) First time feature film director-writer Nicolas Jarecki gives us an assure debut and a film that is more than a calling card, it is a full-blown introduction to a career that can only get better and better.