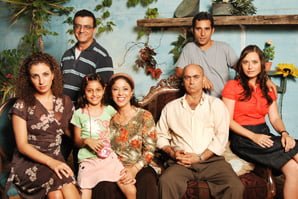 Another entry in the Boston Jewish Film Festival is not a feature film but a popular Israeli TV series about an Arab man whose goal in life is to fit into the Jewish work force and society in “Arab Labor.”

Palestinian Amjad Alayan is a reporter for a Hebrew language newspaper who leans towards all things Israeli and prides himself on having his family pass for natives, but his father is staunchly nationalistic and his wife and daughter generally roll their eyes in Israel's hit sitcom "Arab Labor." The two episodes previewed for Boston's 20th Jewish Film Festival were like a Middle Eastern appetizer that left me wanting more (the festival is showing nine episodes in groups of three). This is Israel's first television starring an Arab character speaking in Arabic and the sitcom is inventive and hilarious while still following basic sitcom conventions. In episode one, Amjad is frustrated that he is always pulled over by border patrols on his way to his Jerusalem office and asks his coworker, Meir, a Jewish photographer in on Amjad's secret, why this is. He learns that his car, a Suburu, identifies him as an Arab and that the best car to ensure no stops is a Rover. While dad pulls strings with a shady mechanic to get him a cut-rate luxury car, Amjad appears on TV to back up claims that Arabs are bad drivers. In episode five, Amjad wishes to ingratiate himself with the family of his daughter's playmate and is thrilled to be invited to share Passover. Once again, the elder generation does not take kindly to the mix, but when Amjad reciprocates, his father participates with gusto, adding sham ritual (diet Sprite??) to the Islamic Festival of Sacrifice. And so, what makes "Arab Labor" so amusing is that it both takes no prisoners and exposes cultural behavior ascribed to one group belonging to another. Those not of Jewish or Arabic backgrounds may find themselves scurrying to the Internet to fully understand the jokes (such as the Rabbi's selling of Hametz to an Arab), but the series is still universal. Norman Issa displays great comic chops as the obsequious journalist.

What makes this amusing Israeli sitcom more than just a TV show is its subject matter. Who would have thought, in the polarized political climate in Israel, that a family tale would make the most of improving Arab/Israeli relations? Initially, the idea of an Israeli Arab wanting to be a part of his Jewish homeland seemed odd. But, take the politics away and it is a story of a man trying to improve his and his family’s lot in life. It is a universal story that transcends religion and politics. There is lots of humor that translates readily to the US and other cultures. The actors are funny, the writing creative and the result is a TV series that I would regularly watch.