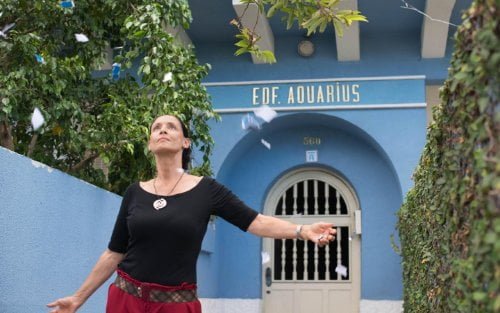 Clara (Sonia Braga) is a well-to-do widow and retired music critic living in an old, posh apartment in Recife on the northeast coast of Brazil. She loves music and all things beautiful and intends to leave her home as a legacy for her children. But, a ruthless real estate company has bought up nearly all of the other apartments and puts increasing pressure on Clara to sell that legacy at the building called “Aquarius.”

In 1980, Clara (Bárbara Colen) was a young wife and mother, a recent breast cancer survivor, celebrating the 70th birthday of her amazing, still stunning Aunt Lucia (Thaia Perez), her extended family gathered in Lucia's seaside apartment on Avenida Boa Viagem. A dissolve empties the room, where we now find Clara (Sonia Braga, "Kiss of the Spider Woman") widowed, almost her aunt's age, the lone holdout against greedy developers whose structures soar above the two story apartment building named "Aquarius." Like his first film "Neighboring Sounds," writer/director Kleber Mendonça Filho's second is centered on a Recife apartment building. But where that film featured an ensemble cast dealing with those who'd make their living offering security services, this film is centered on one protagonist, Clara, fighting those who'd tear it down. Where the earlier film used its sound design to unsettle, this one uses the tension in the escalating war between Clara and Bonfim Construction. But sound is not forgotten, an eclectic soundtrack charting the moods of Clara, a former music critic. But Mendonça Filho's biggest achievement here is his constant connection of the past to the present. Much like Hirokazu Kore-eda's "Our Little Sister," places and things are haunted by memories. Take the used copy of 'Double Fantasy,' Clara shows two young women interviewing her on her career. As they press her, a woman surrounded by a vast vinyl record collection, on digital music, she tells how she bought this LP in a used record store when someone borrowed hers and never returned it. Within it she found an L.A. Times clipping of an interview with Lennon mere weeks before his death. This is a unique time capsule, something an mp3 could never be. Then there is a simple chest of drawers. Every time we see it, we remember Aunt Julia's gaze lingering on it, a passionate bout of lovemaking having occurred atop it decades earlier. This apartment, built in the 1940's (and named for the zodiac sign known for social consciousness), houses Clara's essence, just as her body bears the scar of the breast that was once there. She visits the beach daily, life guard Roberval (Irandhir Santos, "Neighboring Sounds") a close friend of shared routine. When she returns, she refuses to allow Geraldo Bonfim (Fernando Teixeira) and his smooth talking nephew Diego (Humberto Carrão) into her home to discuss their latest offer. And so Diego begins a game of psychological warfare. Mattresses are delivered to the building and when Clara asks why, she's told that Bonfim owns all the other apartments and may do with them what they wish. He blocks her garage, her request he move his car met with a show of passive aggressive jockeying. Loud music accompanies an orgy in the apartment directly above hers, a lit cigarette tossed out an upstairs window landing in her living room, feces smeared on the stairs the next morning. Clara's maid, Ladjane (Zoraide Coleto). shows her where several mattresses were lit on fire in the back courtyard, a fence streaked with smoke. But Clara goes on, playing her music, going out with friends, even entertaining a gigolo. Her three children believe she should leave, causing a tense exchange with daughter Ana Paula (Maeve Jinkings, "Neighboring Sounds"), but her nephew Tomás (Pedro Queiroz) is happy to visit with his new girlfriend and Clara shows them the beach 'divide' between the rich and poor, crossing the line to honor the birthday of Ladjane's son, killed in a motorcycle accident (birthdays are a continual theme). Clara's liberal, wealthy entitlement surfaces once more when the son of a former neighbor sees her on the street, telling her she's selfish, having seen no money from the deal his father, now dead two years, made with Bonfim six years prior. An appeal to an old journalism colleague to help with Diego is rebuffed, his nephew an architect who does business with the developers. But help comes from an unlikely place, two former Bonfim workers Josimar (Valdeci Junior) and Rivanildo (Rubens Santos, "Neighboring Sounds"), coming to warn her of the 'equipment' they saw installed in upper apartments. Clara calls Roberval to help her break in, Josimar and Rivanildo insisting she had to see for herself. The film is a 142 minute sprawl of Clara's everyday life, a constant stream of family and friends and increasingly anxious evenings spent alone within walls holding a hostile building at bay. Still a great beauty at 65, Braga is phenomenal, her languid speech and movement making her defiance all the more powerful. Also strong is Carrão, all smiling accommodation and evil intent. Mendonça Filho's ending is a powerful climax, but one which leaves us with ugly, obvious symbolism, a jarring final note after the grace of Clara's life. (His film seemed destined as Brazil's selection for the foreign language Oscar submission, but was denied that honor in what is seen as a backlash against the cast and crew protest at Cannes against Brazilian elected President Dilma Rousseff's impeachment. It would be a thrill if the Academy thumbed their noses by nominating Braga for Best Actress.) Grade:

This is a slice-of-life character study about a woman of strong will fighting a corrupt company that wants to take away what is hers. Sonia Braga, whom I vividly recall first seeing in “Kiss of the Spider Woman (1985),” gives resilient strength to her strong-willed and defiant Clara. She is a woman of some means and stands up to the relentless contractor, here in the guise of Diego (Humberto Carrao), an outwardly pleasant but inwardly a cold-blooded businessman who will stop at nothing to take over the Aquarius. Clara’s character is established with a flashback to 30 years earlier at the celebration of the 70th birthday of family matriarch, Aunt Lucia (Thaia Perez). Clara is a cancer survivor and conquering the disease has given her the strength to face any obstacle that life puts before her. We then come to the present and the elegant and sophisticated 65-year old Clara, who has made a quite comfortable life for herself. Until, that is, the real estate battle begins. At first, Diego is pleasant and friendly and tries to cajole Clara into selling. She has other plans, though, and secretly purchased two other apartments in the Aquarius. Then, the real harassment begins as Diego sends construction crews, party goers and, even, porn movie makers to occupy the vacant flats surrounding Clara’s to harass her and drive her out of her home. Diego does not know that Clara is a force to be reckoned with. This is first and foremost Sonia Braga’s film as we follow her everyday existence with her extended family and even more extended circle of friends. She proves herself smart, capable and not afraid of a fight. Braga draws you into her character and you get to know Clara, the tough cancer survivor, as a person. Those around Clara are incidental to the story as the camera focuses mainly on Clara and her pursuit of happiness. There was a great deal of political controversy about “Aquarius” in its home country of Brazil when the filmmakers spoke out against that country’s president. This prompted the film to not be selected as Brazil’s submission for foreign-language Oscar consideration. This caused a great brouhaha that spilled over Brazil’s borders and gave “Aquarius” an international audience.