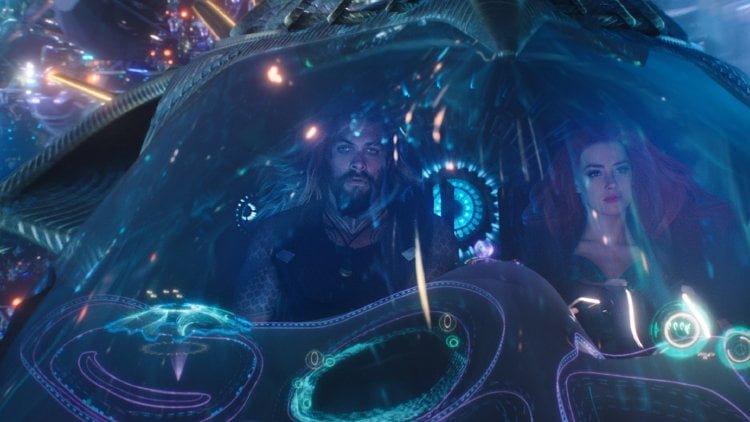 The son of Atlantis's Queen Atlanna (Nicole Kidman) and human lighthouse keeper Tom Curry (Temuera Morrison) has always bridged both worlds, his ability to breathe water making something of a shadowy legend on the surface he considers home. But with his half brother, King Orm (Patrick Wilson), threatening to unite the seven undersea kingdoms as their Ocean Master to destroy the surface which pollutes its environs, Arthur (Jason Momoa) is persuaded by Orm's fiance Mera (Amber Heard) and his vizier Vulko (Willem Dafoe) to fight for his rightful throne in "Aquaman."

In 2016's "Batman v Superman: Dawn of Justice" and especially 2017's "Justice League," Jason Momoa gave us reason to actually look forward to a movie based on a Superhero who'd long been the running joke of HBO's 'Entourage.' While Momoa is just fine as the titular "Aquaman," David Leslie Johnson-McGoldrick and Will Beall's screenplay features far too little humor and far too much origin story - by the time Orm's visiting those remaining undersea realms, they feel like jammed in afterthoughts. Director James Wan, who's rocketed from the independent "Saw" to the big budget studio franchise "Furious 7" in little more than ten years, takes on his first Superhero movie and falls into the same old traps that mar so many - lots of people being slammed into hard surfaces and such an overabundance of CGI eye candy it rots the brain. The film opens in Amnesty Bay, Maine, where Tom Curry rescues a beauty from his rocky shoreline in 1985. Atlanna's fish-out-of-water reactions give a "Splash" like spin to the amusing, romantic prologue, but after bearing Tom a son, Atlantean soldiers arrive. Atlanna kicks ass, but realizes her family will never be safe unless she returns to the arranged marriage she fled from years earlier. She promises Tom she will return one dawn at the end of their dock. In the present, we see a man raise a submarine to the surface, then free the crew being held by pirates. Aquaman refuses to help Dave (Yahya Abdul-Mateen II) free his pirate father from certain death, making an enemy who will factor in his future. The heavily tattooed Arthur likes drinking beer for breakfast at the local bar with dad, but when the sea churns its refuse out in massive waves, almost killing Tom, Arthur, who had wanted nothing to do with his royal Atlantean heritage, agrees to challenge Orm, especially after learning that his mother was sacrificed to the Trench for the crime of having him. But he's impetuous, going into battle before searching for the mythical trident of King Atlan (Graham McTavish) which would ensure certain victory, and Orm is triumphant. Mera shocks both Orm and her father King Nereus (Dolph Lundgren) by escaping with Arthur in a bid to find the trident. Orm informs Vulko he's been well aware he's been training Arthur in Atlantean skills all along and dispatches Manta (formerly just 'Dave') along with his soldiers to stop Arthur and Mera. "Aquaman" was mostly shot 'dry-for-wet' and one would expect the effect to be akin to being plunged into a colorful CGI aquarium, but while there are some nice effects, like warriors riding sharks or Mera's living jellyfish gown, most visuals are so busy they result in information overload. (We are also left to wonder why, if Aquaman can swim like a bullet and Mera control water with her mind, they travel around in an undersea vehicle.) The film's most striking scene takes place on land, Mera running across Sicilian red-tiled rooftops like James Bond or Jason Bourne as Atlantean troopers ran through walls a level below giving the chase a 3D feel without the clunky glasses. Momoa has charm to spare, and Kidman and Dafoe both emerge unscathed, but Wilson is one note and Heard rather dull (as is Rupert Gregson-Williams' score). In his Manta persona, Abdul-Mateen II is plunked into a costume that makes him look like a Martian invader from the 1950's. I have no idea what the giant sea creature is that is featured in the climax, having had a difficult enough time trying to grasp whether Patrick's character was named Warm, Ward or Orm, but Wan's decision to put Aquaman on the shoulder of something the size of a skyscraper renders Aquaman a speck just when he should be super-sized. With the origin story out of the way, DC would be smart to follow Marvel's most recent "Thor" strategy. The mythologies are similar and Momoa could easily be the South Pacific equivalent of Hemsworth's irreverent Nordic hunk. Grade: