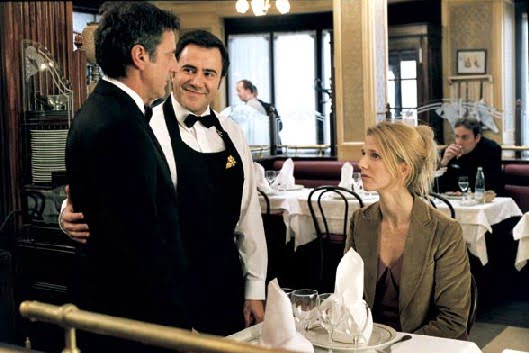 Overworked restaurant maitre d' Antoine (Daniel Auteuil, "The Closet") fears disappointing his girlfriend Christine (Marilyn Canto) once again as he races, late for their date, from Chez Jean. Antoine's decision to take a shortcut through a locked park will complicate his life even more. Seeing a man hanging from a tree, Antoine saves him, but Louis (José Garcia, "Trouble Every Day") is not pleased to find himself alive and Antoine bends over backwards making amends in writer/director Pierre Salvadori's "Après Vous."

With an idea from Danièle Dubroux, screenwriters Salvadori, Benoît Graffin and David Léotard take the old Chinese proverb about being responsible forever for a life one saves and twist it around a traditional romantic comedy with delightful results. Although "Après Vous" slightly overstays its welcome tying up romantic strands, it is one of those rare comedies that actually make one smile and laugh out loud and it goes out with one last, unexpected humorous jab. Antoine brings Louis home, hoping to get him quickly back on his feet. When Louis finally talks, he confides that he sent a goodbye letter to the grandparents who brought him up. Antoine leaves Christine in the middle of the night to make the 260 mile drive to Saint-Malo. Louis will not attempt to divert his grandmother (Andrée Tainsy, "Kings and Queen"), so Antoine dives in, reading a letter of his own imagination to the trusting woman (a cataract operation has left her temporarily blinded). He cannot refuse when she asks for a lift and is powerless to stop her from telling him how she advised Blanche (Sandrine Kiberlain), the woman who left Louis suicidal, to leave her grandson. In order to save yet another life, Antoine must bring the apoplectic Louis back home again. Antoine sets out to reunite Louis with Blanche, but in the interim he sets up a job for him as Chez Jean's sommelier, despite the fact that Louis knows nothing about wine, is claustrophobic and has 'reverse vertigo' (the restaurant chandeliers make him excessively nervous). When Antoine succeeds in finding Blanche (cleverly done with a cut out silhouette), something unexpected happens - he falls in love with her himself. "Après Vous" is an elaborate house of cards, its screenwriters painting Antoine into a corner of his own making. Every time he sets out to do right, something goes wrong - chivalry towards one woman turns into a proposal for another, getting a guy a job endangers his own. A subtle accumulation of financial burdens is piled on - uninsured hospital stays,flowers, expensive bottles of wine - but unlike in an American comedy, the filmmakers let us do the math (just as they do not comment upon the number of bouquets florist Blanche receives from different men). Obvious slapstick is replaced by a more adroit physical schtick. The lead actors make a terrific odd couple. Auteuil, who I am convinced can do anything, uses every facial expression and bit of physicality at his disposal. From his awkward attempt at holding Garcia's hung body up to the self-delighted grin that accompanies a successful bit of fakery, Auteuil not only lights up the screen, but quickly engages the audience's good will. Garcia complements by being a frustrating nebbish, yet keeps us laughing. He uses a great little intake of breath to express his phobias, a signature sound effect that punctuates the movie. Neither Canto nor Kiberlain has much of a chance to distinguish herself, although the casting of the latter is notable for her profile's feminine resemblance to Auteuil's own. Michèle Moretti ("My Favorite Season") provides a nice mixture of affection and suspicion towards Antoine as Chez Jean owner Martine. In lieu of expertise, Antoine tells Louis to advise customers he has 'a nice little Burgundy.' "Après Vous" is amusingly dependable, like that nice little wine with an extra bit of fizz from Auteuil and Garcia.

An old Chinese proverb says that if you save a life, you become responsible for that life. But, Good Samaritan Antoine (Daniel Auteuil) isn’t aware of this saying as he cuts through a park late one night to be on time for a date with Christine (Marilyne Canto). He comes upon a stranger in the midst of trying to hang himself from a tree and, without thinking, jumps in to save the man. The proverb becomes all too true for Antoine in “Apres Vous.” Antoine is the maitre d’ at the popular Paris brassiere, Chez Jean, and has a reputation as a man you can count on, no matter what. Late for his date with Christine, he takes a shortcut and, in the process, saves Louis (Jose Garcia) from committing suicide. But, as Claire Luce Booth had said, “no good deed goes unpunished” and Antoine gets inextricably pulled into the life of sad sack Louis, who is forlorn over losing his girlfriend, Blanche (Sandrine Kiberlain), because of his obsessive ways. The maitre d’ doesn’t know what he is getting himself into when he, first, gives Louis a place to stay. Antoine then agrees to journey many miles to try to retrieve the suicide note that Louis mailed to his grandparents. They get there in the nick of time but, before Antoine can abscond with the letter, near-blind granny asks him to read it to her. He turns the doom and gloom prose into a chatty little note and Antoine thinks that all is now okay. It isn’t. Antoine continues his good deeds by securing a job for Louis in Chez Jean as the sommelier. Unfortunately, Louis can’t tell a fine wine from rubbing alcohol and Antoine must cover up his new friend’s lack of skill with the grape. Antoine decides the best way to “cure” Louis of his suicidal ways is to find Blanche and get the couple back together. What he doesn’t know is that he, too, will fall for the vivacious young woman and his problems will soon go from bad to worse. Apres Vous” is a good-natured little comedy that benefits most from the nicely defined performances by Daniel Auteuil and Jose Garcia. Auteuil, who can do just about any kind of character, gives the good-intentioned Antoine full shrift as he repeatedly fails in his quest to do the right thing but, instead, gets into hot water himself. Garcia gives just the right touch to the forlorn and love sick Louis as he desperately clings to his savior for help, without doing a heck of a lot to help himself. The steady downward spiral of the story, by writer-director Pierre Salvadori (based on an original idea by Daniele Dubroux), causes warning bells to go off in the head of the viewer of the impending doom that is looming but Antoine never hears them. Louis is a total neurotic, even suffering from “backward vertigo,” but the maitre d’ is so wrapped up in his good deeds he can’t see Louis’s neuroses for the trees, even as the relationship costs Antoine countless thousands of euros trying to help his phobic friend. The spiral of Antoine’s life, the thousands he spends to “help” his friend (and to cover his own guilt), the slapstick episodes as he tries to mask his own intentions for Blanche all make for a light, airy, pleasant little story that doesn’t tax the mind. Of course, having Daniel Auteuil in the film is a big plus, as is Jose Garcia. The actors play well off of each other and Sandrine Kiberlain has an ethereal quality about her that would be attractive to both men. Helmer Salvadori does a solid job directing his talented cast and paces the sometimes silly, sometimes touching story with an assured flare. “Apres Vous” is an intelligent romantic comedy that puts the emphasis on the funny and never takes itself too seriously.