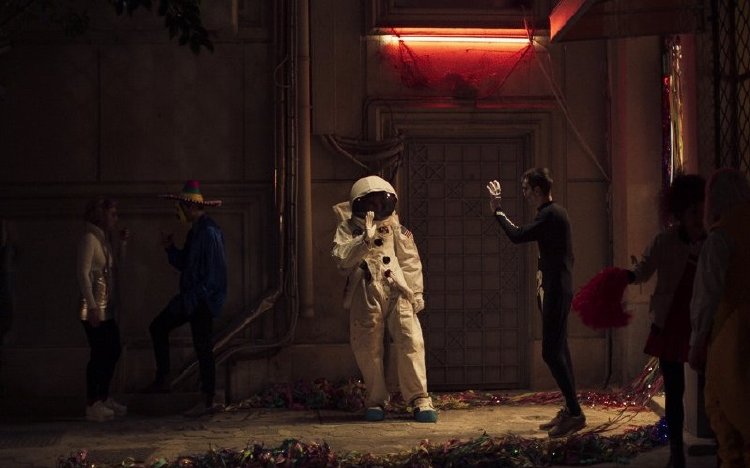 A man alone in his apartment hears a radio report about The Disturbed Memory Department’s new program to help amnesiacs forge a new identity.  He leaves the building, greeting a neighbor’s dog, Malou, then notes a woman trying to help a man who’s forgotten he just got out of the car haphazardly parked on the side of the road.  Later, he’ll be awoken by a bus conductor at the end of the line, unable to give his name or the stop he meant to disembark at.  In a local hospital, he’ll be tagged as #14842 and although he’ll fare poorly on memory exercises, he remembers he likes “Apples.”

Cowriter (with Stavros Raptis)/director Christos Nikou's feature film debut is an absurdist dramedy and psychological mystery that was Greece’s submission for the 2022 International Oscar.  In a parallel world whose pandemic is sudden amnesia, we follow one man (Aris Servetalis, "Alps," unnamed in the film but ‘Aris’ in press notes) who, unidentified and unclaimed in the hospital, is told by a Program Manager (Anna Kalaitzidou, "Dogtooth") he’ll be unable to travel and have difficulty getting a job but has the option to form a new identity under supervision.

She installs him in a furnished apartment, handing him an envelope of cash for expenses.  Every day he’ll be given an assignment on a cassette tape recorded by her colleague (Argyris Bakirtzis) which he must document with a photograph when completed, building an album of new memories.  An early assignment is to ride a bicycle, a feat he is advised no one ever forgets and so Aris makes his way to a playground and finds a child willing to lend his bike.  He’ll attend a costume party done up like an astronaut (‘Does anyone know Batman?’ asks yet another bus driver where several party goers have gathered at a stop – all look to Catwoman.)  He’ll become a habitual customer with a greengrocer where he restocks his bowl of apples.  In the park one day, he’ll be approached by Malou and call the dog by name, then race away before Malou’s owner catches up.  Is Aris remembering or has he never forgotten?

Although Aris is encouraged to approach a woman, flirt with a woman and even have a one night stand, he appears to avoid those instructions.  One day after watching a movie (an ersatz “Texas Chainsaw Massacre”), Aris is approached by Anna (Sofia Georgovassili), another program subject, who asks him to take her picture by the movie poster as he just has.  He obliges, then tries to leave, but she ascertains they are heading in the same direction.  A friendship of sorts forms.  One day, driving in her car (one of her assignments which she’s asked him to help her with), Aris begins to sing along to ‘Sealed with a Kiss’ on her car radio.  When she notes how nice it is that he’s ‘remembered that by heart,’ a look of alarm crosses his face.  Later, Aris’s greengrocer will impart a bit of knowledge which changes his behavior.

Aris’s last assignment, a moving encounter of human empathy, closes in on the heart of the matter.  Nikou and his largely deadpan protagonist keep us engaged throughout, wondering just where this tale is heading (and figuring it out beforehand doesn’t detract from the film’s effectiveness).   Production designers and cinematographer Bartosz Swiniarski make their Athens locations largely neutral, a blank slate, the 4:3 aspect ratio mirroring the Polaroids upon which Aris builds his new life.  Many have observed that we are comprised of our memories, but Nikou takes this a step further, considering just what would make someone reject their own identity.

A brand new pandemic has descended upon the people of earth. This one causes an inexplicable amnesia and many victims, without memory or identification, are flooding the system. This brings on a program to resettle the unclaimed amnesiacs and help them find a new life in “Apples.”

A man (Aris Serveralis) falls asleep on a bus and wakes at the end of the line. He tells the driver he does not know who he is and without ID, he is put under medical care as an “unclaimed” patient. He enters the program designed to help these lost souls to rebuild their lives. He is given an apartment and a stipend and develops a previously unknown fondness for apples.

As his story plays, he has what might be little memories of his past, like a remembered song. Is he regaining his past memories or is he just a con man? Does he really suffer from the latest pandemic? Or, is he just opting out from a world he no longer understands? Or, as I believe, he suffered a great shock and loss – he lost his wife, maybe - and his grief caused his temporary amnesia. I think the interpretation is up to the viewer, whether hopeful or cynical.

I have not had a movie make me think more of the human condition and mind in a long time. I do not know what happened to the man, but I do believe I know what happened to him. That, to me, is a sign of good filmmaking, here in the hands of director and co-writer Christos Nikou (with Stavros Raptis), who held my attention throughout and kept me guessing.