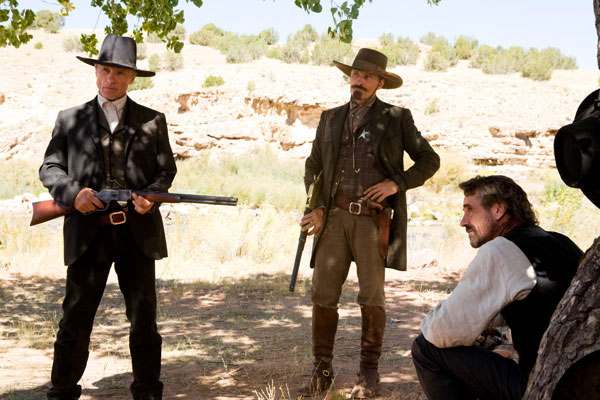 Cowriter (with Robert Knott)/director/star Ed Harris ("Pollock") goes the oater route for his sophomore helming job, adapting Robert Parker's novel with a traditional take on a story as old as "Rio Bravo" and a revisionist spin toward its womenfolk. "Appaloosa" doesn't connect emotionally the way Kevin Costner's "Open Range" did five years ago, but it's an interesting ride with some slightly offbeat cowboys. After witnessing Bragg's murderous ways, Virgil and Everett ride into Appaloosa and meet with some edgy townsmen led by Phil Olson (Timothy Spall, "Sweeney Todd: The Demon Barber of Fleet Street") who tell them that Bragg has 'been living off us like coyotes off a dead buffalo carcass.' 'Everything that eats meat likes a dead buffalo,' Virgil dryly replies. The duo in the self-proclaimed 'peace-keeping' business immediately prove their worth by taking out two of Randalls's men who refuse a civilized request to quit pissing in the barroom. Later having coffee, they note the arrival of Allison French (Renée Zellweger, "Miss Potter," "Leatherheads") who immediately gloms onto Virgil as savior and protector. She's a widow with only a dollar to her name. Virgil assures her the hotel will hire her for musical entertainment and provide lodging. Randall rides into town to confront Virgil over the loss of his men, but they come to a stalemate. Then frightened young ranch hand Joe Whittfield (Gabriel Marantz) tells Virgil he was a witness to the Bell murder and Bragg is arrested and jailed. In the meantime, Everett is amazed to watch Virgil, whose only women have been 'squaws and whores,' prepare to settle down with Ali, then shocked when Ali puts the moves on him. Transporting Bragg via train, Ali comes into play again as the hostage of Ring (Lance Henriksen, "Aliens") and Mackie Shelton (Adam Nelson, "Mystic River"), former colleagues of Virgil's now hired to spring Bragg. What Virgil sees through his scope while on their trail is a real eye opener. Harris, sporting a sleek and tightly fitted black ensemble (designed by David C. Robinson, "The Savages," "Funny Games U.S."), is a lawman looking to improve his vocabulary - when at a loss for words, his Cole turns to Hitch for elucidation. Bragg's fancy words are more intimidating than any violence he might mete. Mortensen sends us off as he welcomed us with some rather lackluster philosophical narration, but it is his point of view we are looking through and he's fine in the film, its moral compass and loyal buddy. Irons, sporting a rather bushy salt and pepper 'do, isn't hissable so much as ironically amused, an interesting take on a mass murderer. Zellweger's got a tough role to play and except for the scarcity of her gender and supposed breeding, she's never really convincing as the object of so much desire, nor does she make her bond to Virgil seem stronger than that to any other, the film's most serious flaw in light of Hitch's final show of loyalty. The production is authentic, with cinematography by Dean Semler ("Apocalypto") picking up the heat and dust of the place. Nothing ever seems cleaner or shinier than it should be. Original music by Jeff Beal ("The Deal," TV's "Ugly Betty") gives a modern gloss to what's typical of the genre that's occasionally distracting. "Appaloosa" is a Western that is modern in its playfulness while never seeming not of its period. Harris and Mortensen are good enough together to warrant another adventure.