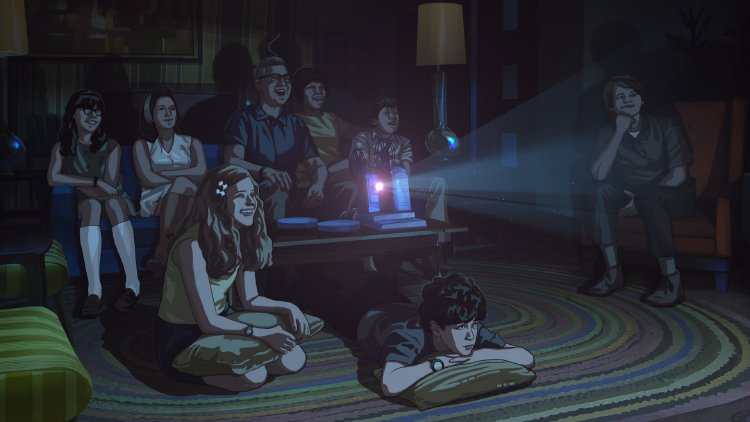 Growing up in Houston in the 1960’s placed both Stanley (voice of Milo Coy) and the Ed White Elementary School down the road from NASA.  As the world waited for the Apollo 11 mission, Stanley dreamed himself right into being the one and only recruit for “Apollo 10 ½: A Space Age Childhood.”

"Boyhood" writer/director Richard Linklater returns to the rotoscoping he used on "Waking Life," a process through which live action footage of actors and locations is animated, for perhaps the purist piece of boomer nostalgia ever committed to film.  While the movie’s trailer suggests it will be about Stanley’s secret trip to space in a rocket which NASA mistakenly made too small for an adult, that aspect is merely a launching pad into everything about being an American kid in 1969.

Narrator Jack Black guides us through the entire film as the adult version of Stanley looking back at what he describes as his ‘Brady Bunch’ family.  He is the youngest of three boys and three girls, his sister Stephanie (voice of Danielle Guilbot) the face of budding protest and voice of musical instruction, Mom (voice of Lee Eddy, "I Don't Feel at Home in This World Anymore") identifying hippies from their classic woodie, Dad (voice of Bill Wise) part of the space program as a NASA shipping and receiving supervisor.

A loving tribute to the then new Houston Astrodome includes exciting firsts probably unknown to most outside the area, like the big digital scoreboard which featured shooting cowboys and that new-fangled stuff known as Astroturf.  Linklater’s loving anecdotes of this family’s quirks (a paternal grandmother who reused paper towels and took the kids to see “The Sound of Music” every six months, the maternal version a chain-smoking paranoid conspiracy theorist; a dad who justified stealing plywood from their development’s construction site with the price of their new ranch home) suggest autobiography and he leaps from one subject area to the next – TV shows, board games, record albums, Baskin Robbins’ 31 flavors – with streams of examples anyone of a similar age will remember fondly.  This is a family whose kids’ tell after school time via ‘Dark Shadows’ and if you never thought you’d see an animated recreation of Barnabas Collins, here’s your chance.  Over a half a century later, it is impossible not to note a loss of innocence, captured in a segment about over-chlorinated swimming pools, chemical mosquito spraying and riding in the bed of a pickup truck.  Hours of entertainment were to be had making prank telephone calls.  Movies like “2001” were cultural touchstones (and who remembers how prescient “Destination Moon” turned out to be!).

Linklater rotoscopes archival footage of such events as JFK’s speech at Rice University with less definition and a boxier aspect ratio than Stanley’s memories, which bloom into bolder color on a wider screen.  This celebration of childhood in a specific time and place builds up to man’s landing on the moon, where Linklater returns to Stanley’s fantasy.  As mom and dad carry the sleeping child to bed, dad frets over his having missed history while mom decides that in years to come, he’ll probably remember that he experienced it all.

It is 1969 and the world is waiting with bated breath for the Apollo 11 launch and the first man on the moon. But, one young Texas boy, Stanley (Milo Coy), is approached by two NASA officials who make him a very interesting proposal in “Apollo 10½: A Space Age Childhood.”

The title of this charming, animated coming-of-age story, by Richard Linklater, is a little misleading. The 10½th Apollo mission aside, what we have is a history lesson of 1969 and before that is easy to enjoy and, for an old guy like me, a remembrance of those days before the internet, smart phones and our current greed and selfishness. For the younger viewers, you will get a chuckle over how primitive we once were (and, still are).

“The Space Age Childhood” is a small, and very well done, part of the Linklater’s personal story of growing up in America’s heartland at the time of the race to the moon against the heathen Soviets. Real or fantasy, Stan’s story is told in a marvelous way that keeps you guessing all the way through.

The draw for me with “Apollo 10½,” besides Stan’s wonderful story, is all the familiar nostalgia that touches on many aspects of my own life and the world’s life in those changing and exciting times. Remember the first heart transplant and the intro of the touch tone phone? How about the Vietnam War, hippies, Cape Kennedy, Mercury 7 and Alan Shepard? Then there are home movies – ya know, on actual film – drive ins, triple features, mom’s cooking (good or bad), grandparents, the Apollo 1 disaster and Apollo 8’s orbit of the moon, OUIJA boards and board games (when did you last play “Monopoly”?). Of course, one cannot forget the Apollo 11 coverage on TV with Walter Cronkite, Carl Sagan and Eric Sevareid. There are a lot of others, too.

The nostalgia aspect of “Apollo 10½" will strike a chord with anyone who grew up in 1950s and 60s America. The animation, similar to the rotoscoping technique that Linklater used in his earlier animated flicks, is hyper-realistic and is a complement to the whole film.