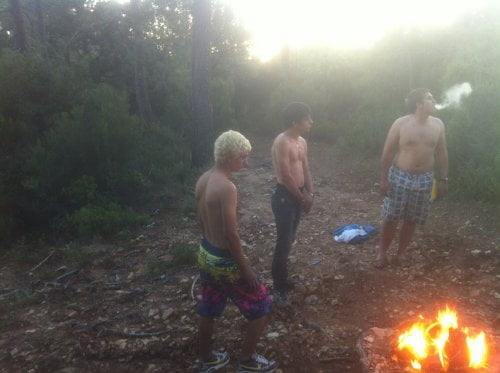 Aziz (Aziz El Hadachi) helps his caretaker father attend the homes of wealthy French summer home owners on the island of Corsica, cutting lawns and cleaning pools. A moment of indiscretion occurs when Aziz invites his friends into one of the deserted homes for a party. Things are stolen from the house including, unknown to the teen, an expensive antique shotgun that will result in a dire confrontation in “Les Apaches.”

Cowriter (with Benjamin Baroche)/director Thierry de Peretti's "Les Apaches," about a group of Corsican youths who attempt to mask their guilt in the destruction of a holiday home makes them target one of their own, is like a more telescopically focused, both literally and figuratively, "Gomorrah." This low budget indie is a hyperactive cousin to Gus Van Sant's "Elephant" with the building sickening dread of "Boys Don't Cry" and the moral vacuum of "River's Edge." De Peretti favors observation over plot-driven dialogue and packs a punch in a scant 82 minutes.

The sunny Corsican setting would normally be used by a filmmaker to show the lives of the rich and famous living their luxurious lives. Instead, director and co-scribe Thierry de Peretti (with Benjamin Baroche) takes us to the not-so-luxurious world of the many Algerians who have settled on the island to start a new, hopefully better, life. “Les Apaches” focuses mainly on Aziz and his friends, Francois-Jo (Francois-Joseph Cullioli), Hamza (Hamza Meziani) and Jo (Joseph-Marie Ebrard). The director has his fledgling newcomers-to-the-screen to use their own names for their characters, a smart thing when dealing with non-professionals. The story pivots on the stolen shotgun. When the rich owners arrive at the house and learn of the robbery, they wave it away and do not ask for the police to help. Instead, they go to the local mob boss to look into the matter. For the four boys, this means their lives are at threat and one could betray the rest. Things do not end well. Considering its novice cast, sophomore director and miniscule budget, “Les Apaches” is a solid thriller that presents a gritty look at a place where few would bother to examine – except here.