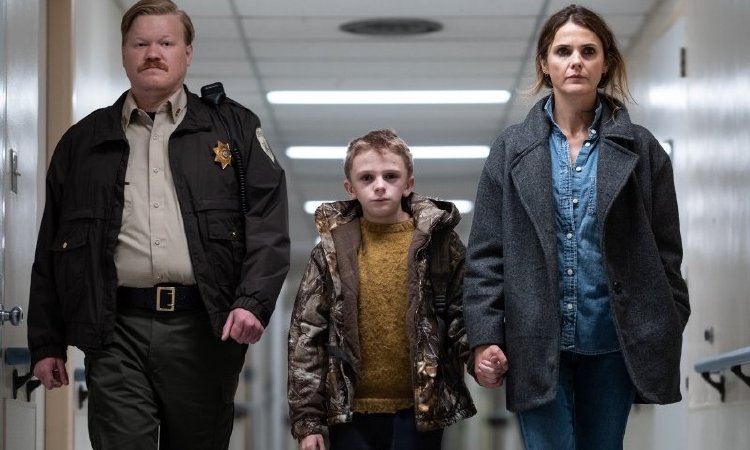 Julia Meadows (Keri Russell) left Cispus Falls, Oregon, to get away from an abusive father, but has always felt guilty about leaving her younger brother Paul (Jesse Plemons) behind.  Now, having struggled with alcoholism, she’s returned, living with her brother, now the town’s sheriff, in their childhood home.  But in her new teaching position, she’s troubled by the listless kids she tries to engage in class, especially one boy, the small and bullied Lucas Weaver (Jeremy T. Thomas).  She recognizes signs of abuse in the story he writes about three bears and finds disturbing drawings in his desk of a horrific creature bearing huge “Antlers.”

Cowriter (with Henry Chaisson and Nick Antosca, adapting his short story 'The Quiet Boy')/director Scott Cooper ("Out of the Furnace," "Black Mass") makes a strong statement connecting industrial pollution not only to the destruction of the environment, but humanity itself, depressed areas fomenting addiction and abuse, but he’s muddled the Native American mythology he frames his thesis on.  “Antlers” is very effective condemning a society that leaves broken lives in the wake of abandoned mines and deforestation, but is too arbitrary when it comes to its monstrous payback.

A prologue establishes that Frank Weaver (Scott Haze, "Old Henry") is running a meth lab with a buddy in an abandoned mine, leaving his young son Aiden (Sawyer Jones) outside in his pickup.  Frank hears an ominous noise and finds a shaft full of what we later learn are hanging medicine bags when something very large top heavy with antlers attacks.

In her classroom, Julia is trying to get her young students to engage in a fun class on fables and myths.  Only one student ever raises her hand.  After taking note of Lucas, she tries to draw him out over ice cream after school, but when she cuts too close, he’s scared off, telling her not to follow him anymore.  We are made privy to his circumstances, watching him kill small animals or gather up roadkill to feed his father and younger brother in the attic his father bolted locks on before securing himself inside.  To the consternation of her brother, Julia visits the rundown home, finds its door open, but flees when she hears animalistic noises coming from within.  She brings her concerns to Principal Booth (Amy Madigan).  Both authorities seem ineffective, but Ellen Booth surprises us by visiting the Weaver house.  She too goes inside, only to be reported missing.

The town’s former sheriff, Warren Stokes (Graham Greene), finds a horrifically mutilated body in the woods along with what appears to be a piece of an antler (it is he who explains the myth of the Wendigo to Paul and Julia).  A shocked coroner believes he’s found human teeth marks.  Soon after Julia finds Ellen’s car parked outside the Weaver house, she’s taken custody of Lucas over Paul’s objections.

Cooper’s production is mournful, the beauty of the Pacific Northwest marred by a depressed economy.   You can feel a chill in the air.  And while the Meadows homestead is homey, it holds horrific memories for Julia, flashbacks explaining her longing looks at the liquor in the local convenience store.  Russell’s performance is strong, her look haunted, her concern for the waifish Lucas paramount.  The usually dependable Plemons leaves us guessing as to Paul’s feelings just as we’re left wondering why he appears so overwhelmed by his job.  Cooper does conjure up some tense and creepy moments as the Wendigo gathers force, but this adaptation of Antosca’s short story betrays it, this spirit not only wandering, but too indiscriminate looking for a new host.  That flaw unduly infects the film’s conclusion, rendering it a sequelitis cliché.