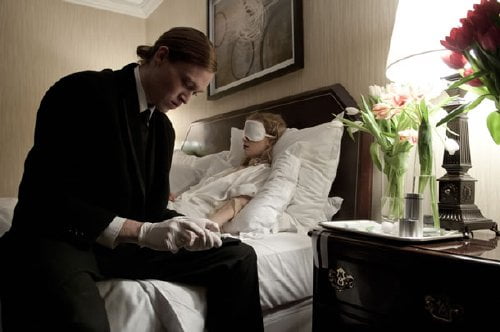 Toronto's Lucas Clinic allows anyone with the money to pay to bodily commune with their celebrity fantasy by injecting various viruses that once lived in famous bodies. There is some competition, but Vole & Tesser do not have the exclusive rights to the world's biggest star, Hannah Geist (Sarah Gadon, "Cosmopolis") like Lucas does. There's also a thriving black market, and Lucas employee Syd March (Caleb Landry Jones, "X-Men: First Class") skirts his company's stringent checkout procedures by carrying the viruses within his own body. Syd's always in some state of illness, but when he injects Geist's latest bug without knowing it's fated to kill her, he has to track down its source as the clock ticks ominously in "Antiviral."

Writer/director Brandon Cronenberg's (son of David, making his feature debut) theme - that our present celebrity culture is a sickness - is readily apparent but, his film is so stylishly and horrifically realized many will find the young filmmaker a chip off the old block. Cronenberg fils, though, while sharing dad's bodily fixations, exhibits other influences from his Kubriakian art direction (white minimalism) to Lynchian imagery (red drapes and blurred head shots). His sci-fi story itself is weirdly unique and star Landry Jones compels in a breakout role.

The pale, freckled Landry Jones, wearing his hair swept back in a short ponytail and sounding almost like a somber echo, is an arresting presence, with the dangerous allure of a vampire. He has his own little ritual with clients, empathetic with their choices, advising 'Just a little pinch,' then departing with 'Enjoy.' Colds and flu are common choices, but Edward Porris (Douglas Smith, HBO's 'Big Love') chooses something a little pricier, 558, the Geist Herpes virus. Syd sells most of his black market finds to Arvid (Joe Pingue, "Dream House"), a celebrity meat purveyor who grows muscle tissue in a 'cell garden' out back and weighs famous steaks and organs out front (Cronenberg attempts a legal explanation as to why this is not considered cannibalism, but lets the later crime of murder slide). Television screens broadcasting live celebrity coverage are omnipresent (and often hilarious). When a fellow employee is fired for an offense Syd himself is guilty of, Syd gets the enviable task of visiting Geist to collect her latest virus, but once he injects himself, he becomes sicker than he's ever been. He also becomes a target.

The film can get a bit bogged down in its own mythology. There are portable machines which transport the viruses and 'ReadyFace Consoles' which copy protect the viruses, showing facial distortions of its host as some kind of identification. These are made non-contagious (although they still infect the client), unlike their black market counterparts. There are also hints of celebrity deformities and mutations, although just what these mean isn't very clear.

Cronenberg stages some pretty freaky scenes, but "Antiviral" isn't the grossout the trailer might suggest unless needles are your bugaboo. The film follows not only in the tradition of his dad's more outwardly gory "Rabid" and "Videodrome," but of 1981's "Looker" and even, in its latter half at least, 1950's "D.O.A."

The nation is on the verge of a new trend craze: getting infected with the viruses and illnesses of their favorite celebrities to form a biological bond. One enterprising young man, Syd March (Caleb Landry Jones) who works for the company selling the copyrighted germs, sees a way to make a lot of money by smuggling bootleg germs in - himself. It is a good deal until he becomes infected with superstar Hannah Geist’s (Sarah Gadon) deadly disease and needs to find the “Antiviral.”

Dad David Cronenberg must be walking around with his thumbs under his suspenders and proudly declaring “That’s my boy!” in response to the feature debut of son Brandon. The spawn of horror-meister David is influenced by his famous father and his copious works but certainly marches to his own tune. “Antiviral” is an intelligent, well-thought out story about the celebrity adoration that gets out of control.

In this new world, the “biological connection” with one’s favorite movie star, sports star or any other popular celebrity. Lucas Clinic, the purveyor and acquirer of all manner of copyrighted celebrity diseases, holds the monopoly on the process. If you want the same herpes sores as your idol, you can get it. But, this multibillion dollar industry has its rivals and Syd is right in the middle of a ruthless disease bootlegging operation.

I am impressed by the star debut of Caleb Landry Jones. Syd, quite literally, puts his life on the line as he smuggles the celebrity bugs out of the clinic. As the story progresses, Syd’s physical condition, wracked by the Hannah Geist germ, deteriorates steadily and looks increasingly awful as he frantically tries to find the cure. The young actor gives a calling card performance. I look forward to seeing more of him.

Brandon Cronenberg makes a striking debut for his first feature, following on the heels of his famous father while blazing his own career trail.