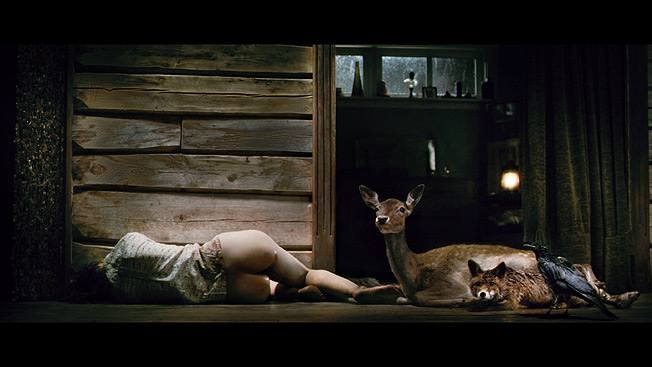 After their toddler Nic (Storm Acheche Sahlstrøm) falls to his death after spying his parents making love, grief compounded by guilt devastates his mother (Cannes Best Actress winner Charlotte Gainsbourg, "The Golden Door," "I'm Not There"). His father (Willem Dafoe, "Manderley," "Spider-Man 3"), a therapist, becomes angered by the amount of drugs prescribed by his wife's doctor and decides to take charge of her recovery. He takes her to the place she says she fears the most - Eden, their cabin in the woods - but their descent into nature opens a door to the "Antichrist."

Writer/director Lars von Trier's ("Breaking the Waves," "Dogville") film was the lightening rod of controversy at this year's Cannes film festival and looks to continue the debate with art film audiences. It's been called a masterpiece and laughable trash, but instead turns out to be a thought-provoking piece of work that is emotionally distancing, yet connects on a primal level with its stunningly rendered images (cinematographer Anthony Dod Mantle, far from his "Slumdog Millionaire" experience) and Lynchian rumbling sound (Kristian Eidnes Andersen, "Dancer in the Dark," "The Boss of It All." The black and white prologue, accompanied by an aria from Georg Friedrich Händel's Italian opera Rinaldo, features some seriously hot sex between He and She which begins in the shower and ends up against a front-loading washing machine. Nic's story, which is intercut, also features water in the form of snow - is Lars saying that sex and death have a purity about them? That only makes sense if one thinks of procreation as evil, as clearly this is the opposite of that. The images are all shot in slo-mo, which, accompanied by the somber music, give them the weight of deadly seriousness. Nic has three statuettes on a table in his room which resemble toy soldiers but are titled Pain, Grief and Despair on their bases. Why would such things be kept in a child's room? Because von Trier tricks us, giving us more information about this scene in Chapter 3. Grief, Pain ('Chaos Reigns') and Despair (Gynocide) are the titles of the chapters that follow. In the first, we witness Dafoe's character taking control of his wife's therapy, an idea that she states is not a good one even as the thought is running through our head. Sprung from the hospital, He and She travel to Eden by train (everything from the couple's apartment to the hospital, the journey and cabin in the woods feels infinitely more European that the supposed Washington state location - the film was shot in Germany). As they backpack in, it begins to become clear that She is more animalistic/emotional in her nature and He is is more cerebral/rational (and, frankly, every bit as arrogant and infuriating as She says He is - I wanted to smack him myself). She has trouble crossing a bridge which appeared in her dreams. In a brilliant cinematographic trick, the greenery at edges of the frame occasionally warp and bend, giving an eerie effect. At the end of this first chapter, Dafoe sees his first animal representation of its title - a doe spied amidst some trees turns, revealing the stillborn fawn protruding from its haunches. His face sickens. Pain finds acorns (the oak being a gateway in Celtic mythology) raining down upon the cabin roof and His hand covered in leech-like lichen. Nature continues to take the dark path. He continues to dig into what about Eden scares Her. She heard a baby cry when she left Him in the city to work on her thesis (Gynocide!), but Nic, who was with Her, apparently was fine. On day, she begins to jump about the outdoor places that had made her shrink away, and tells Him that she's cured, she's fine. He sees a rustle in the ferns and discovers a fox eating its own entrails. 'Chaos reigns,' it tells Him. In Despair, He discovers more about that thesis trip and his discoveries are disturbing, setting scenes we have seen before in new light. Her research led her to believe that the female is inherently evil and She is slipping into that madness. Much genital mutilation and violence ensue. 'A crying woman is a scheming woman," She tells him. The crow betrays Him, but in the end, the Three Beggars' (a mythic constellation of the deer, fox and crow) reappearance foreshadow a different end than the one She has predicted. In the Epilogue, once again black and white and accompanied by the same piece of music, He attempts to leave an Eden strewn with Boschian imagery. The graphic violence, especially that upon the sexual organs of both He and She, in the third chapter have been much commented upon, but while they could be considered shock tactics, they do have a place in the plot as the water of the beginning is replaced with blood (breaking water and afterbirth?). The forgivable guilt of the Prologue has become something much less so, Original Sin replaced with a damnable one. In finding Hell in Eden, von Trier has reversed the story from Genesis, mixing in Pagan symbolism and witchcraft. The craft on display here is stunning, despite some cringe-inducing images, and the actors are up to the von Trier's challenges, but although the writer/director's primal scream reverberates throughout, it is difficult to empathize, let alone sympathize, with his characters. Observe the Hieronymus Bosch triptych The Garden of Earthly Delights and feel the weight of man's propensity for evil. Watch "Antichrist" and think, but emotions are kept at arm's length. It's a cerebral piece of horror, one that keeps you at arm's length.